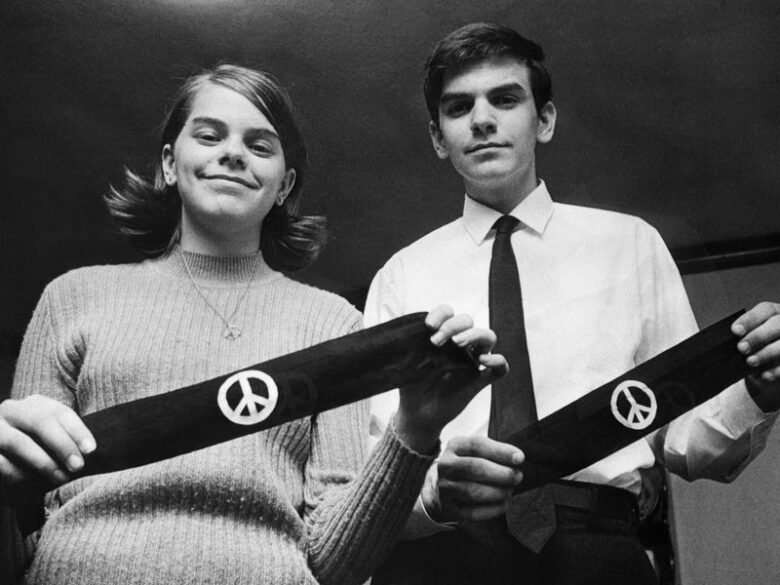 Use this decision point with the Students and the Anti-War Movement Narrative, the Protests at the University of California, Berkeley Decision Point, and the Walter Cronkite Speaks Out against Vietnam, February 27, 1968 Primary Source to discuss the public dissent of U.S. involvement in the Vietnam War.

During the Eisenhower administration, the United States had supported South Vietnam and its attempts to defend itself against communist North Vietnam by deploying a few hundred military advisors to support the South Vietnamese army. President John F. Kennedy then increased the number of American military advisors in Vietnam from 900 under Eisenhower to more than 16,000 in 1963.

After Kennedy’s assassination, President Lyndon B. Johnson continued the escalation. A North Vietnamese attack on a U.S. naval destroyer, the USS Maddox, in the Gulf of Tonkin in August 1964 led Congress to pass the Gulf of Tonkin Resolution, which gave the president the authority “to take all necessary measures to repel any armed attack against the forces of the United States and to prevent further aggression.” Given that 1964 was a presidential election year, Johnson was careful to make clear that he had no plans to commit U.S. troops to Vietnam. After winning a landslide election in 1964, however, he introduced U.S. ground troops into Vietnam in March 1965 and began Operation Rolling Thunder, an aerial bombing campaign against North Vietnam, that same month. By the end of 1965, there were almost 200,000 American troops in Vietnam, 1,900 of whom were killed in combat that year.

Opposition to the war began almost immediately. Young people on college campuses were often at the forefront of protests, including student-led groups such as Students for a Democratic Society and the Free Speech Movement in Berkeley, California. These groups were influenced by the success and tactics of the civil rights movement earlier in the decade. For young men, protesting the war had personal meaning, because most were eligible for the military draft, meaning the government could send them overseas to Vietnam. The burning of draft cards became an important symbolic protest of the war. In 1965, there were two protest marches on Washington, DC, both attracting thousands of people.

In December 1965, 15-year-old John Tinker; his 13-year-old sister, Mary Beth; and their 16-year-old friend Christopher Eckhardt were opposed to the war and sought a constructive way to express that opposition even if it might be an unpopular decision. They decided to wear black armbands to their schools in Des Moines, Iowa, to protest the Vietnam War. Their stated goals were to mourn the war’s casualties, American and Vietnamese, and to show their support for a potential Christmas truce and the possibilities of a negotiated settlement of the war. The Tinkers were the children of a politically active liberal Methodist minister. The family was deeply influenced by both the civil rights movement and the Christian social gospel movement, which led them to put their religious ideals into practice. The children believed the armbands would be a symbolic protest to show their opposition to the war but not cause a disturbance at school.

Upon learning of the protest, school officials created a new policy banning the wearing of armbands under penalty of suspension. At this time, school officials had a great deal of power over the behavior of students. Still, the Tinkers and Eckhardt decided to ignore the new policy, risking suspension from school, and to go ahead with their protest. A few of their fellow students joined them. The anti-war views and actions of the Tinkers and Eckhardt were not popular in their schools or in their community. As a response to their violation of school policy, John and Mary Beth Tinker and Christopher Eckhardt were subsequently suspended.

In January 1966, the Des Moines public school board voted 5–2 against changing the policy on student speech, thereby upholding the suspensions of the protesting schoolchildren. The Iowa Civil Liberties Union took up the case and brought it to the courts, with the Tinkers and Eckhardt as plaintiffs. Later that year, a district court dismissed the students’ case against the school district. In November 1967, a federal circuit court deadlocked at 4–4, meaning that the lower-court decision against the students was upheld. The students then took their case to the U.S. Supreme Court, which agreed to hear it in 1968.

In February 1969, the Supreme Court ruled 7–2 in favor of the Tinkers and against the school’s policy. Justice Abe Fortas wrote the majority opinion in Tinker v. Des Moines Independent Community School District. “First Amendment rights, applied in light of the special characteristics of the school environment, are available to teachers and students,” Fortas argued. “It can hardly be argued that either students or teachers shed their constitutional rights to freedom of speech or expression at the schoolhouse gate.” To suppress student speech, Fortas argued, school officials would have to demonstrate that such speech created a “substantial disruption of or material interference with school activities.” He noted that no such disruption had occurred with the Tinkers’ protest. Justice Hugo Black’s dissent showed concern about the effects the court’s decision would have over the authority of school officials and believed it gave too much power to students.

During the more than three years that the Tinker case was in the courts, opposition to the war grew. In October 1967, a protest on the Mall in Washington, DC, attracted 100,000 people, many of whom then marched to the Pentagon to continue the protest. Anti-war protests had a significant impact on public opinion as well as on government actions in Vietnam. By 1968, more than 500,000 U.S. troops were stationed in Vietnam, but Lyndon Johnson decided against running for re-election as popular support for the war declined dramatically. The war continued under President Richard Nixon until the 1973 Paris Peace Accords officially ended it.

The Tinker decision was in keeping with other Supreme Court decisions under Chief Justice Earl Warren that expanded individual rights in the 1950s and 1960s. Tinker was a milestone case for student rights and remains an important judicial precedent. The court argued that the First Amendment, incorporated through the Fourteenth Amendment, protected students in public schools. The only question was how far those protections went. Since the Tinker decision, the Supreme Court has somewhat limited those rights of student free speech, including what school-sponsored student newspapers can publish, and limiting indecent speech and speech that advocates illegal activities.

The Tinkers decided to exercise their right to free expression in their public schools, despite the disapproval of school officials and the threat of punishment. In standing up for their rights and taking their case to court, they defended the rights of free speech and free expression for future generations of students.

3. Which statement regarding the antiwar movement is incorrect?

4. President Lyndon Johnson’s escalation of the war in Vietnam occurred primarily as a result of

6. The immediate event that led the Tinkers to seek legal redress in court was

7. During the years the Tinker case was working its way through the U.S. court system, the war in Vietnam

“In order for the State in the person of school officials to justify prohibition of a particular expression of opinion, it must be able to show that its action was caused by something more than a mere desire to avoid the discomfort and unpleasantness that always accompany an unpopular viewpoint. . . .

In the present case, the District Court made no such finding, and our independent examination of the record fails to yield evidence [otherwise] . . .

Under our Constitution, free speech is not a right that is given only to be so circumscribed that it exists in principle, but not in fact. Freedom of expression would not truly exist if the right could be exercised only in an area that a benevolent government has provided as a safe haven for crackpots. The Constitution says that Congress (and the States) may not abridge the right to free speech. This provision means what it says. We properly read it to permit reasonable regulation of speech-connected activities in carefully restricted circumstances. But we do not confine the permissible exercise of First Amendment rights to a telephone booth or the four corners of a pamphlet, or to supervised and ordained discussion in a school classroom.”

1. The conditions discussed in the excerpt influenced

2. The excerpt most directly resulted from

3. The excerpt was most directly shaped by the constitutional principle of