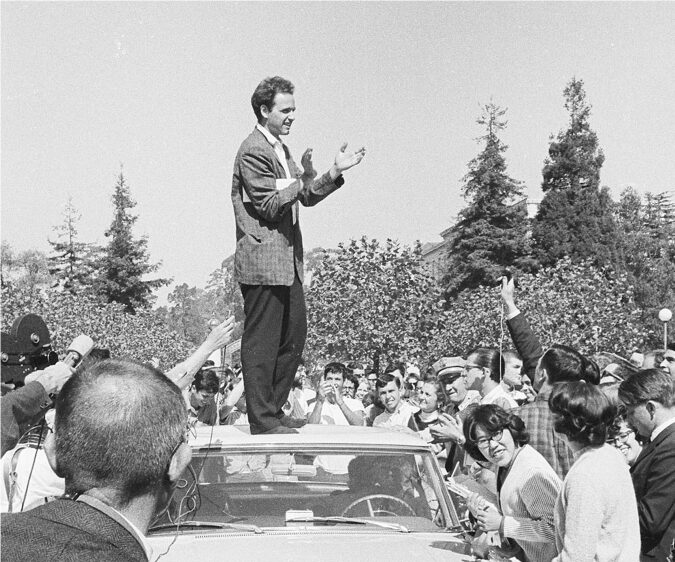 Use this decision point with the Students and the Anti-War Movement Narrative, the Protests at the University of California, Berkeley Decision Point, and the Walter Cronkite Speaks Out against Vietnam, February 27, 1968 Primary Source to discuss the public dissent of U.S. involvement in the Vietnam War.

In the fall of 1964, Clark Kerr, the president of the University of California (UC) system, was working serenely in his Berkeley campus office in the San Francisco Bay area. Kerr had come a long way. The son of a Pennsylvania farmer, he had been the first member of his family to go to college. He had chosen Swarthmore, where he received training in economics and joined the Society of Friends (Quakers). Acting on his pacifist Quaker beliefs, Kerr engaged in peace protests throughout the 1930s as he pursued graduate studies in economics. He specialized in labor economics, convinced that unions and management could peacefully resolve their differences. At heart, Kerr was a Franklin Roosevelt–New Deal Democrat who believed that the federal government could and should engage in Keynesian deficit spending to build a better America.

After World War II, Kerr found employment at Berkeley, where he worked his way up through the administrative ranks. He earned the faculty’s goodwill in 1952 when he defended professors who refused to sign a state-mandated loyalty oath attesting that they were not communists. He became president of the UC system in 1958 and wrote a “Master Plan for Higher Education in California.” Kerr believed everyone should have an opportunity to go to college but that students needed to find the correct “fit” for their academic abilities. Hence, he envisioned a three-tier system: the University of California campuses for the academic elite, California State schools for academically middle-range students, and community or junior colleges for the rest. Presidents Dwight Eisenhower, John Kennedy, and Lyndon Johnson consulted Kerr for his insights on education and conflict resolution.

In 1963, Kerr published The Uses of the University. He believed universities—or “multiversities,” as he called them—had to train people for careers, generate regional and national economic growth, and promote social peace. He predicted a future in which higher education would be at the heart of new economic order: “What the railroads did for the second half of the last century and the automobile for the first half of this century may be done for the second half of this century by the knowledge industry.”

Kerr was among the first educational leaders to anticipate a postindustrial America in which workers would be valued more for their intellectual than their physical abilities. However, he did not anticipate that some of the young people he sought to train as “knowledge workers” would hold him in contempt, or that Berkeley’s activists would see him not as a long-time defender of free speech but rather as its enemy. When students challenged the postwar Cold War consensus about foreign policy, the military-industrial complex, and corporate culture, Kerr faced a decision about how to respond to their discontent.

Kerr’s world came crashing down on October 1, 1964. At Berkeley’s Sather Gate entrance, a dispute between civil rights activists and the dean of students escalated. The dean insisted, incorrectly as was later found, that students were on university property participating in political activities that violated campus policy. When graduate mathematics student Jack Weinberg, a veteran of the Mississippi Freedom Summer, refused to leave, the police arrived to arrest him. Spontaneously, dozens of students sat down in front of the police car to prevent Weinberg from going to jail.

The student protesters, who soon numbered in the hundreds, initially represented an ideological cross-section of the campus. Regardless of whether they were free-market libertarians or “red diaper babies,” all believed the university was acting in an unfair, arbitrary manner. Moreover, student protesters wondered how a public university could prohibit political activities and limit speech, acting as if the Bill of Rights did not apply to the campus. In truth, UC administrators, fearful of antagonizing the California legislature that provided funding for the university system, had placed legally questionable limits on constitutionally protected speech. The resulting student protests forced Kerr to make a decision between responding to their concerns or cracking down, while keeping in mind how that decision would be perceived.

While the standoff between police and students continued, undergraduate philosophy major Mario Savio became the voice of the free-speech protest. The son of a New York City Italian Catholic machinist, Savio did not share the class and cultural profile of the typical upper-middle-class student activist. Moreover, he had always been shy and soft spoken. Recent experiences, however, had changed him.

In the summer of 1964, Savio, like Weinberg, had gone to Mississippi to register African Americans to vote. As he later observed, his time in the Deep South shocked him: “I spent the summer in Mississippi. I witnessed tyranny. I saw groups of men in the minority working their wills over the majority. Then I came back here and found the university preventing us from collecting money for use there and even stopping us from getting people to go to Mississippi to help.”

Savio climbed atop the stranded police car and used it as a speaker’s platform. Having read Kerr’s book, he regarded the UC leader as a faceless bureaucratic manipulator, rather than as a champion of educational opportunity. The multiversity, Savio believed, prepared students to become obedient cogs in an oppressive social order. Addressing the stunned police and Kerr’s operatives, he scornfully observed that, “They’re family men, you know, they have a job to do! Like [Nazi war criminal] Adolph Eichmann.” Savio’s forceful words attracted national news media attention and gave birth to the Berkeley Free Speech Movement (FSM).

Kerr was stunned that Savio compared him to Eichmann, a man whom sociologist Hannah Arendt had said embodied the “banality of evil.” He dismissed the FSM for engaging in “a ritual of hackneyed complaints.” To the disgust of most liberal arts faculty, Kerr, who had stood up to red baiters when they accused others of being Communists in the 1950s, argued that some of the FSM activists were the children of communists. Although this was accurate, Kerr gave the impression of a desperate leader who had lost control of the situation.

Weinberg and the university worked out an arrangement whereby he agreed to go to the police station and be processed but would not be charged with a crime. Demonstrations continued after the initial incident. As protests escalated amid calls for the FSM to broaden its attack on American institutions and foreign policy, libertarian, conservative, and moderate students parted company with the organization.

On December 2, 1964, approximately 1,000 students occupied an administration building called Sproul Hall, engaging in a massive act of civil disobedience. During the occupation, Savio delivered a speech that inspired activists across the country: “There is a time when the operation of the machine becomes so odious, makes you so sick at heart, that you can’t take part; and you’ve got to put your bodies upon the gears and upon the wheels, upon the levers, upon all the apparatus and you’ve got to make it stop.” Police subsequently arrested 733 activists for trespassing. Never had so many middle- to upper-middle-class whites been arrested in one place.

The legacies of the Berkeley FSM were extensive. Berkeley became the media symbol of student unrest. The FSM mobilization inspired subsequent national campus mobilization to protest the escalating Vietnam War. There was also no doubt that Berkeley earned the title of the nation’s most activist campus.

Berkeley, however, was more divided than media observers realized. Students who majored in business and the sciences, as well as their professors, stayed away from the increasingly radicalized FSM. Moreover, whereas the FSM had about 1,000 student supporters, Berkeley enrolled 25,000. At the peak of Berkeley campus protests in the late 1960s, perhaps one-third of students engaged in any kind of political activity. Berkeley activists were in the minority.

Kerr had always been sensitive to perceived political threats from the right. However, Savio and other FSM activists, as well as the growing membership of Students for a Democratic Society (SDS), did not take conservatives seriously. To them, the enemy was anti-communist liberals; conservatives were politically irrelevant. They laughed when former Hollywood star Ronald Reagan won the Republican gubernatorial nomination in 1966. Reagan condemned urban rioting and Berkeley activists. As he asked during the 1966 election, “Will we allow a great university to be brought to its knees by a noisy dissident minority? Will we meet their neurotic vulgarities with vacillation and weakness?”

After defeating incumbent Democratic governor Pat Brown, Reagan made good his vow to fire Kerr and promote law and order in California’s cities and colleges. The issue became a popular hot-button issue among many in the conservative movement and among voters over the next decade. Reagan’s journey to the White House in 1980 began with the Berkeley FSM.

1. In the 1960s, University of California president Clark Kerr believed higher education would be central to the training of

2. The Berkeley Free Speech Movement culminated in all the following except

3. Undergraduate Mario Savio had just participated in which civil rights protest campaign just before the birth of the Berkeley Free Speech Movement?

5. As the protests escalated and the Berkeley Free Speech Movement broadened its attack on American society and foreign policy, libertarian, conservative, and moderate students

6. Although the Berkeley Free Speech Movement attracted nationwide attention as the symbol of liberal campus protests, in fact, its supporters

7. The confrontation that prompted the Berkeley Free Speech Movement occurred between

“The University of California is a microcosm . . . of the problems of our society . . . One of the greatest social ills of this nation is the absolute refusal by almost all of its members to examine seriously the presuppositions of the establishment. This illness becomes a crisis when the university, supposedly a center for analysis and criticism, refuses to examine these presuppositions. Throughout the society, the individual has lost more and more control over his environment. When he votes, he must choose between two candidates who agree on almost all basic questions. On his job, he has become more and more a cog in a machine . . . He grows more cynical. The bureaucratization of the campus is just a reflection of the bureaucratization of American life.

As the main energies of our society are channeled into an effort to win the cold war, as all of our institutions become adjuncts of the military-industrial complex, as the managers of industry and the possessors of corporate wealth gain a greater and greater stranglehold on the lives of all Americans, one cannot expect the university to stay pure.”

1. This excerpt challenged what prevailing norm?

2. Which group would most likely support the point of view expressed in the excerpt?

3. Which of the following developments represented a continuation of the sentiments expressed in the excerpt?

Freeman, Jo. At Berkeley in the Sixties: The Making of an Activist. Bloomington, IN: Indiana University Press, 2003.

The Regents of the University of California, Free Speech Movement Digital Archive, http://bancroft.berkeley.edu/FSM/

Hodgson, Godfrey. America in Our Time: From World War II to Nixon, What Happened and Why. Princeton, NJ: Princeton University Press, 2005.