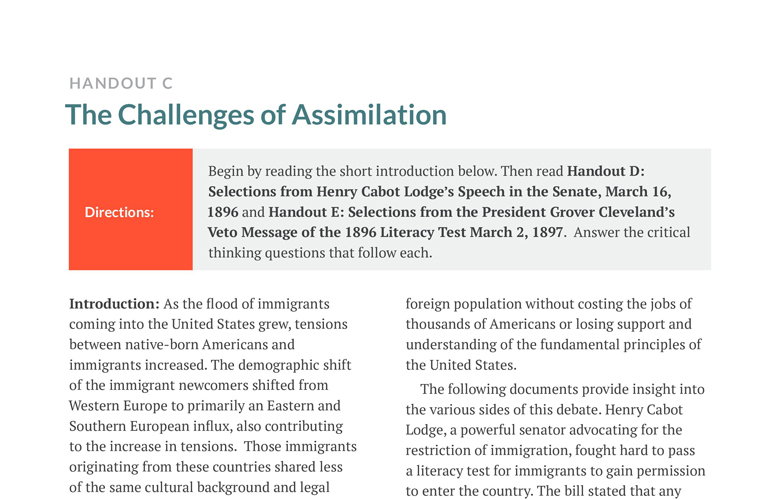 Directions: Begin by reading the short introduction below. Then read Handout D: Selections from Henry Cabot Lodge’s Speech in the Senate, March 16, 1896 and Handout E: Selections from the President Grover Cleveland’s Veto Message of the 1896 Literacy Test March 2, 1897. Answer the critical thinking questions that follow each.

Introduction: As the flood of immigrants coming into the United States grew, tensions between native-born Americans and immigrants increased. The demographic shift of the immigrant newcomers shifted from Western Europe to primarily an Eastern and Southern European influx, also contributing to the increase in tensions. Those immigrants originating from these countries shared less of the same cultural background and legal traditions than their western counterparts, as well as speaking less English. Fears that these newcomers might undermine the culture of the United States abounded. However, not everyone believed these fears were founded. Citing the generations of immigrants who had populated the United States in the preceding decades, many believed these immigrants posed no threat. The central question the country faced was this, could American society subsume a large foreign population without costing the jobs of thousands of Americans or losing support and understanding of the fundamental principles of the United States.

The following documents provide insight into the various sides of this debate. Henry Cabot Lodge, a powerful senator advocating for the restriction of immigration, fought hard to pass a literacy test for immigrants to gain permission to enter the country. The bill stated that any person who could not show a basic reading and writing proficiency would not be allowed to enter the country. On the other side, President Grover Cleveland advocated strongly against the bill. The selections of his veto message outline his reasoning. The two documents together illuminate the tensions at play in the immigration debate at the turn of the twentieth century.