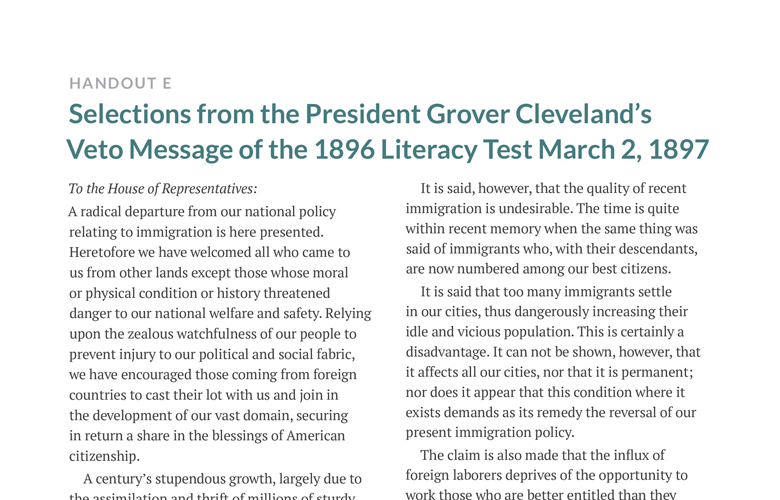 Selections from the President Grover Cleveland’s Veto Message of the 1896 Literacy Test March 2, 1897

To the House of Representatives:

A radical departure from our national policy relating to immigration is here presented. Heretofore we have welcomed all who came to us from other lands except those whose moral or physical condition or history threatened danger to our national welfare and safety. Relying upon the zealous watchfulness of our people to prevent injury to our political and social fabric, we have encouraged those coming from foreign countries to cast their lot with us and join in the development of our vast domain, securing in return a share in the blessings of American citizenship.

A century’s stupendous growth, largely due to the assimilation and thrift of millions of sturdy and patriotic adopted citizens, attests the success of this generous and free-handed policy which, while guarding the people’s interests, exacts from our immigrants only physical and moral soundness and a willingness and ability to work.

A contemplation of the grand results of this policy can not fail to arouse a sentiment in its defense, for however it might have been regarded as an original proposition and viewed as an experiment its accomplishments are such that if it is to be uprooted at this late day its disadvantages should be plainly apparent and the substitute adopted should be just and adequate, free from uncertainties, and guarded against difficult or oppressive administration. It is not claimed, I believe, that the time has come for the further restriction of immigration on the ground that an excess of population overcrowds our land.

It is said, however, that the quality of recent immigration is undesirable. The time is quite within recent memory when the same thing was said of immigrants who, with their descendants, are now numbered among our best citizens.

It is said that too many immigrants settle in our cities, thus dangerously increasing their idle and vicious population. This is certainly a disadvantage. It can not be shown, however, that it affects all our cities, nor that it is permanent; nor does it appear that this condition where it exists demands as its remedy the reversal of our present immigration policy.

The claim is also made that the influx of foreign laborers deprives of the opportunity to work those who are better entitled than they to the privilege of earning their livelihood by daily toil. An unfortunate condition is certainly presented when any who are willing to labor are unemployed, but so far as this condition now exists among our people it must be conceded to be a result of phenomenal business depression and the stagnation of all enterprises in which labor is a factor. With the advent of settled and wholesome financial and economic governmental policies and consequent encouragement to the activity of capital the misfortunes of unemployed labor should, to a great extent at least, be remedied. If it continues, its natural consequences must be to check the further immigration to our cities of foreign laborers and to deplete the ranks of those already there. In the meantime those most willing and best entitled ought to be able to secure the advantages of such work as there is to do….

…The best reason that could be given for this radical restriction of immigration is the necessity of protecting our population against degeneration and saving our national peace and quiet from imported turbulence and disorder.

I can not believe that we would be protected against these evils by limiting immigration to those who can read and write in any language twenty-five words of our Constitution. In my opinion, it is infinitely more safe to admit a hundred thousand immigrants who, though unable to read and write, seek among us only a home and opportunity to work than to admit one of those unruly agitators and enemies of governmental control who can not only read and write, but delights in arousing by inflammatory speech the illiterate and peacefully inclined to discontent and tumult. Violence and disorder do not originate with illiterate laborers. They are, rather, the victims of the educated agitator. The ability to read and write, as required in this bill, in and of itself affords, in my opinion, a misleading test of contented industry and supplies unsatisfactory evidence of desirable citizenship or a proper apprehension of the benefits of our institutions. If any particular element of our illiterate immigration is to be feared for other causes than illiteracy, these causes should be dealt with directly, instead of making illiteracy the pretext for exclusion, to the detriment of other illiterate immigrants against whom the real cause of complaint can not be alleged….

…A careful examination of this bill has convinced me that for the reasons given and others not specifically stated its provisions are unnecessarily harsh and oppressive, and that its defects in construction would cause vexation and its operation would result in harm to our citizens.