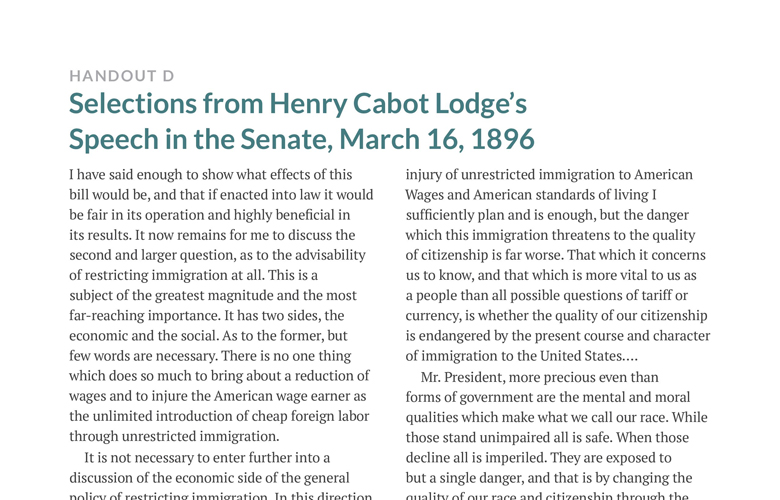 Selections from Henry Cabot Lodge’s Speech in the Senate, March 16, 1896

I have said enough to show what effects of this bill would be, and that if enacted into law it would be fair in its operation and highly beneficial in its results. It now remains for me to discuss the second and larger question, as to the advisability of restricting immigration at all. This is a subject of the greatest magnitude and the most far-reaching importance. It has two sides, the economic and the social. As to the former, but few words are necessary. There is no one thing which does so much to bring about a reduction of wages and to injure the American wage earner as the unlimited introduction of cheap foreign labor through unrestricted immigration.

It is not necessary to enter further into a discussion of the economic side of the general policy of restricting immigration. In this direction the argument is unanswerable. If we have any regard for the welfare, the wages, or the standard of life of American workingmen, we should take immediate steps to restrict foreign immigration. There is no danger at present at all events to our workingmen from  the coming of skilled mechanics or trained and educated men with a settled occupation or pursuit for immigrants of this class will never seek to lower the American standard of life and wages. On the contrary, they desire the same standard for themselves. But there is an appalling danger to the American wage earner from the flood of low, unskilled, ignorant, foreign labor which has poured into the country for some years past, and which not only takes lower wages, but accepts a standard of life and living so low that American workingmen cannot compete with it….

I now come to the aspect of this question which is graver and more serious than any other. The injury of unrestricted immigration to American Wages and American standards of living I sufficiently plan and is enough, but the danger which this immigration threatens to the quality of citizenship is far worse. That which it concerns us to know, and that which is more vital to us as a people than all possible questions of tariff or currency, is whether the quality of our citizenship is endangered by the present course and character of immigration to the United States….

Mr. President, more precious even than forms of government are the mental and moral qualities which make what we call our race. While those stand unimpaired all is safe. When those decline all is imperiled. They are exposed to but a single danger, and that is by changing the quality of our race and citizenship through the wholesale infusion of races whose traditions and inheritances, whose thoughts and whose beliefs are wholly alien to ours, and with whom we have never assimilated or even been associated in the past. The danger has begun. It is small as yet, comparatively speaking, but it is large enough to warn us to act while there is yet time and while it can be done easily and efficiently. There lies the peril at the portals of our land; there is pressing the tide of unrestricted immigration. The time has certainly come, if not to stop, at least to check, to sift, and to restrict those immigrants. In careless strength, with generous hand, we have kept our gates wide open to all the world. If we do not close them, we should at least place sentinels beside them to challenge those who would pass through. The gates which admit men to the United States and to citizenship in the great republic should no longer be left unguarded.