Oates, Stephen. To Purge This Land with Blood: A Biography of John Brown. Amherst: University of Massachusetts, 1984.

Break students into small groups. Have them read the following excerpt from the Declaration of Independence.

We hold these truths to be self-evident, that all men are created equal, that they are endowed by their Creator with certain unalienable Rights, that among these are Life, Liberty and the pursuit of Happiness. — That to secure these rights, Governments are instituted among Men, deriving their just powers from the consent of the governed, — That whenever any Form of Government becomes destructive of these ends, it is the Right of the People to alter or to abolish it, and to institute new Government, laying its foundation on such principles and organizing its powers in such form, as to them shall seem most likely to effect their Safety and Happiness. Prudence, indeed, will dictate that Governments long established should not be changed for light and transient causes; and accordingly all experience hath shewn, that mankind are more disposed to suffer, while evils are sufferable, than to right themselves by abolishing the forms to which they are accustomed. But when a long train of abuses and usurpations, pursuing invariably the same Object evinces a design to reduce them under absolute Despotism, it is their right, it is their duty, to throw off such Government, and to provide new Guards for their future security. — Such has been the patient sufferance of these Colonies; and such is now the necessity which constrains them to alter their former Systems of Government.

Ask the students to discuss the question: When is right of rebellion permissible under the Declaration of Independence?

Reassemble as a class and have a representative from each group explain the answers that the group discussed. Then, explain to the students that Abraham Lincoln described the ideals of the Declaration of Independence as an “apple of gold” that was inextricably connected to the Constitution and Union as a “picture [frame] of silver.”

Ask the class: What is the connection between the natural right principles of liberty and equality in the Declaration of Independence and the constitutional rule of law in the Constitution?

Transition to the narrative of John Brown and how he persuaded himself that it was necessary and permissible to violate the constitutional rule of law to achieve natural rights for all Americans of every race. Discuss the importance of conscience and whether the individual is allowed to act on their conscience even if violating the law.

Have students read the Abraham Lincoln and Martin Luther King, Jr. primary source excerpts on the Primary Source Activity page. Have students use the Self-Deception Graphic Organizer to compare each historic figure’s views on just and unjust laws.

Have students complete the Self-Deception Worksheet essay prompt for homework.

Read the play, A Man for All Seasons, by Robert Bolt, or watch the 1966 movie directed by Fred Zinnemann.

In the movie Lincoln (2012), President Lincoln tells a vignette about surveying and the importance of prudence in pursuing the moral principle of ending slavery as opposed to Thaddeus Stevens’ abolitionist way of doing what is right regardless of the consequences.

LINCOLN “I admire your zeal, Mr. Stevens, and I have tried to profit from the example of it. But if I’d listened to you, I’d’ve declared every slave free the minute the first shell struck Fort Sumter; then the border states would’ve gone over to the confederacy, the war would’ve been lost and the Union along with it, and instead of abolishing slavery, as we hope to do, in two weeks, we’d be watching helpless as infants as it spread from the American South into South America.”

THADDEUS STEVENS “Oh, how you have longed to say that to me. You claim you trust them – but you know what the people are. You know that the inner compass that should direct the soul toward justice has ossified in white men and women, north and south, unto utter uselessness through tolerating the evil of slavery. White people cannot bear the thought of sharing this country’s infinite abundance with Negroes.”

LINCOLN “A compass, I learnt when I was surveying, it’ll – it’ll point you True North from where you’re standing, but it’s got no advice about the swamps and deserts and chasms that you’ll encounter along the way. If in pursuit of your destination you plunge ahead, heedless of obstacles, and achieve nothing more than to sink in a swamp, what’s the use of knowing True North?”

President Abraham Lincoln was strongly dedicated to the principle of natural rights for all human beings. Although the abolitionists pressed for immediate action, Lincoln was also firmly dedicated to the constitutional rule of law and would not break it to do what was right. The Emancipation Proclamation (1863) demonstrated that Lincoln wanted the slaves to be free. At the same time, Lincoln was mindful of and bound to acting under presidential authority in the Constitution. Answer the following questions: Compare and contrast the goals and methods of John Brown and Abraham Lincoln. Did Brown or Lincoln demonstrate the virtue of prudence, or practical wisdom, in achieving his goal? 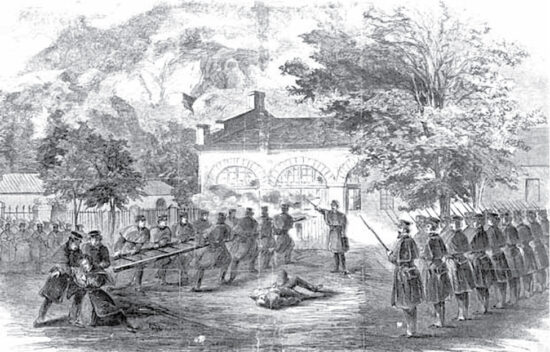 Was John Brown a righteous crusader or violent radical? 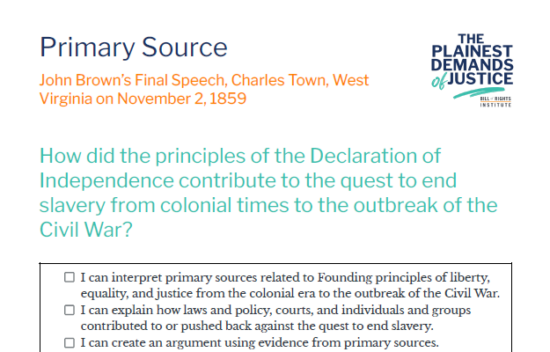