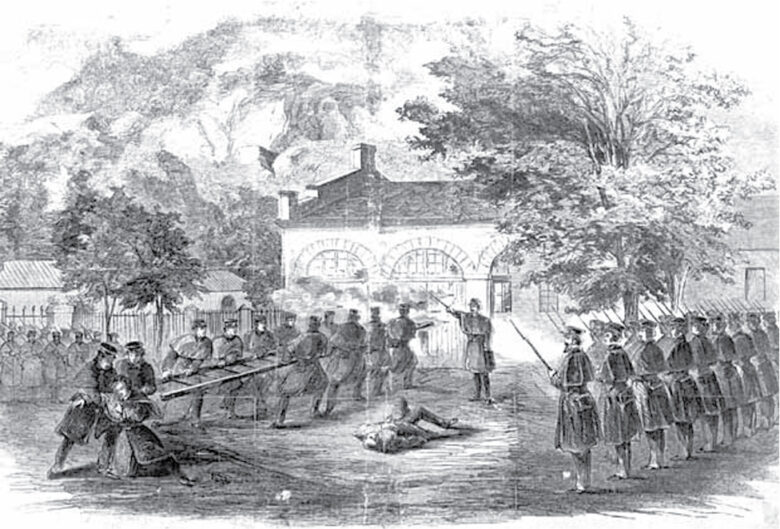 Use this Narrative alongside the John Brown: Hero or Villain? DBQ Lesson plan to allow students to fully evaluate John Brown’s approach to abolitionism.

During his lifetime John Brown was greatly admired as a hero by some and fiercely hated by others. Abolitionists who supported the end of slavery generally praised his actions as necessary to destroy the institution; southerners were usually horrified by the violence he used to achieve his ends. Others, such as politician Abraham Lincoln, questioned the means even if they agreed with the end of abolishing slavery. Even today, John Brown provokes a variety of responses among historians and biographers. Judgments of his characterize him as everything from a self-righteous, fundamentalist terrorist to a crusading abolitionist for freedom.

The 1830s and 1840s witnessed increasing radicalism on the slavery issue with the rise of abolitionism. In 1831, abolitionist William Lloyd Garrison launched his newspaper, The Liberator, with the principled, uncompromising words about eradicating slavery: “I will not equivocate – I will not excuse – I will not retreat a single inch – AND I WILL BE HEARD.” Brown was swept up by such unbending abolitionist thinking, which was consistent with his Calvinist Puritan faith. He asserted that he had an “eternal war with slavery” and dedicated himself to the cause when abolitionist editor Elijah Lovejoy was killed by a mob in 1837. “Here before God, in the presence of these witnesses, in this church, [I] consecrate [my] life to the destruction of slavery,” Brown pledged during a church meeting.

Over the next few decades, Brown failed in several business ventures and moved frequently, but he remained devoted to the cause of freeing slaves from bondage. He thought the Underground Railroad was inadequate and studied guerrilla warfare tactics. He settled near Lake Placid, New York, to manage a colony of free blacks and there organized a secret society to prevent slavecatchers from capturing their quarry in the North. Outraged by the Fugitive Slave Act of 1850, he urged violent opposition to the law and the immoral slave system generally.

In 1854, the Kansas-Nebraska Act allowed the residents of those territories to decide whether to enter the Union as a free or slave state, according to the doctrine of popular sovereignty, and overturned the Missouri Compromise. Brown thought a southern Slave Power had conspired to destroy republican institutions, and he followed several of his sons who had moved to the newly created Kansas Territory. Southerners and northerners alike were flooding the territory to decide the issue. Deeply divided over slavery, they set up rival territorial governments in different towns. Tension was rife and erupted into sporadic violence, threatening to cause civil war. Brown had raised money from northern abolitionists and purchased firearms, swords, and knives to fight in the impending war. He and his sons joined the Liberty Guards militia and the Pottawatomie Rifles militia company to fight proslavery forces.

On the night of May 24, 1856, a frenzied Brown unleashed his righteous vengeance against on nearby southerners he presumed were complicit in the evil slave system. He and his sons knocked on the doors of nearby cabins of several proslavery families who were too poor to own slaves. Armed with his pistols, hunting knives, and swords, Brown and his sons took five adult males prisoner at gunpoint and led them outside into the darkness while their wives and children cowered inside. They hacked the hostages to death and shot a wounded prisoner in the head. The mutilated bodies were discovered the following day.

When asked about the deeds, Brown said, “I did not do it, but I approved of it.” He proclaimed his godly righteousness in murdering proslavery advocates: “God is my judge. We were justified under the circumstances.” He went into hiding in the woods and soon returned to the Northeast to raise money, weapons, and recruits for another scheme against southern slavery, believing murder was morally permissible if done in the name of what was right.

Brown traveled around New England, speaking to wealthy, prominent abolitionists, including Theodore Parker, William Lloyd Garrison, Julia Ward Howe, Thomas Wentworth Higginson, Frederick Douglass, Charles Sumner, Henry David Thoreau, and Ralph Waldo Emerson, among others. He received some encouragement and funding, but many were skeptical of his violent means and remarks, such as that it would be better if a whole generation should die a violent death than that a word of the Bible or Declaration of Independence be violated. Brown was incredulous that others did not share his zeal or commitment, especially in the wake of the 1857 Supreme Court decision in Dred Scott declaring blacks incapable of citizenship and the Missouri Compromise unconstitutional. Meanwhile, he used the donations he collected to order hundreds of pikes and firearms to launch his war to liberate the slaves.

As he informed a few confidants, Brown intended to lead an army to raid the federal arsenal at Harpers Ferry in what then was Virginia. He planned to seize the weapons there and distribute them to liberated slaves to start a violent race war in which enslaved persons killed their masters and fled to a revolutionary state in the Appalachian Mountains. In the summer of 1859, he assumed a false identity and moved to a farmhouse near Harpers Ferry. Only 21 recruits (16 whites and five African Americans) joined Brown to initiate his slave revolt. As months ebbed away in hiding, he wrote a political manifesto modeled on the Declaration of Independence and entitled “A Declaration of Liberty by the Representatives of the Slave Population of the United States of America,” and a new constitution guaranteeing equal rights to all races.

On the night of October 16, the small, but righteous band finally moved out in the dark to begin the war. Three men were assigned to hide a cache of weapons at a schoolhouse as a staging point for the slave rebellion. The rest marched on Harpers Ferry and easily took prisoner a night watchman and an arsenal guard when they broke into the armory. Brown dispatched a handful of men in a wagon loaded with weapons to break into nearby homes, liberate their slaves, and take hostages. The rebels wounded a watchman and accidentally shot and killed a free black railroad worker. As the town’s population was roused, church bells warning of a slave insurrection pealed throughout the countryside and telegraph messages spread word of the raid across the nation. Brown’s men had taken prisoner some 40 townspeople who had been going to work and taken cover in a firehouse.

Daylight brought nothing but disaster for the ill-conceived raid. Brown’s rebels engaged in a shootout with the townspeople and lost one of the band to a sniper. Armed militia arrived and cut off any escape. When Brown sent three emissaries to negotiate a cease-fire, they were gunned down. When five of his men tried to retreat to the Shenandoah River, two were shot and killed, one drowned, and two (one free black and one enslaved man) were captured and nearly hanged. The raiders shot and killed the mayor of the town, only fueling the anger of the citizens of Harpers Ferry. In the chaos, some 30 of Brown’s prisoners had escaped, and by nightfall he only had four or five healthy men left. One of his sons died of his wounds and another barely clung to life, but Brown resolved to fight to the end to achieve his goal of liberating the slaves.

The following day, Colonel Robert E. Lee arrived with Lieutenant J.E.B. Stuart and 90 Marines. Stuart tried to negotiate a surrender, but Brown refused. The Marines battered down the heavy door and stormed into the building where Brown and his men were amid gunfire and thrusting swords and bayonets. After his other men had all gone down in the mêlée, Brown was slashed by a saber before being knocked unconscious.

A few days later, Brown was tried for murder, inciting slave insurrection, and treason against the state of Virginia and was convicted on all charges. Predictably, many antislavery activists praised his actions, while southern defenders of slavery were horrified. Transcendentalist author Henry David Thoreau delivered an oration praising Brown for breaking an unjust law. “Are laws to be enforced simply because they are made?” Thoreau asked.

During his sentencing, Brown was allowed to make a statement, which he concluded by saying, “If it is deemed necessary that I should forfeit my life for the furtherance of the ends of justice, and mingle my blood further with the blood of my children and with the blood of millions in this slave country, whose rights are disregarded by wicked, cruel, and unjust enactments, I submit. So let it be done!”

On December 2, a wagon brought him to a gallows on a cornfield surrounded by 1,500 militiamen to guard against any rescue attempt. There Brown was bound, hanged, and placed in a coffin. That morning, he had handed one of the guards a scrap of paper with a prophetic warning: “I, John Brown am now quite certain that the crimes of this guilty land will never be purged away but with Blood.” Brown’s raid helped fuel the sectionalism that led to the bloody Civil War between North and South and claimed the lives of more than 600,000 Americans.

2. What was John Brown’s method of freeing the enslaved persons held in bondage in the United States?

4. In his tactics and beliefs regarding slavery, John Brown most resembled

5. Which event triggered a response by John Brown that foreshadowed his actions in Harpers Ferry in 1859?

By the time this illustration was made, the popular view of John Brown

“We ask not that the slave should lie,
As lies his master, at his ease,
Beneath a silken canopy,
Or in the shade of blooming trees.

We ask not “eye for eye,” that all
Who forge the chain and ply the whip
Should feel their torture, while the thrall
Should wield the scourge of mastership.

We mourn not that the man should toil.
‘Tis nature’s need. ‘Tis God’s decree.
But let the hand that tills the soil
Be, like the wind that fans it, free.
Melody to “Old Hundred’ Hymn”

1. A historian might use this song as evidence to support

2. Which group would most likely support the song’s point of view?

3. The song most directly resulted from what earlier movement?

Speech of Senator Stephen A. Douglas, Delivered in the U.S. Senate, January 28, 1860: http://www.wvculture.org/history/jbexhibit/bbspr02-0012.html

Holt, Michael F. The Fate of Their Country: Politicians, Slavery Extension, and the Coming of the Civil War. New York: Hill and Wang, 2005.

Oates, Stephen B. To Purge This Land with Blood: A Biography of John Brown. Amherst, MA: University of Massachusetts Press, 1970.