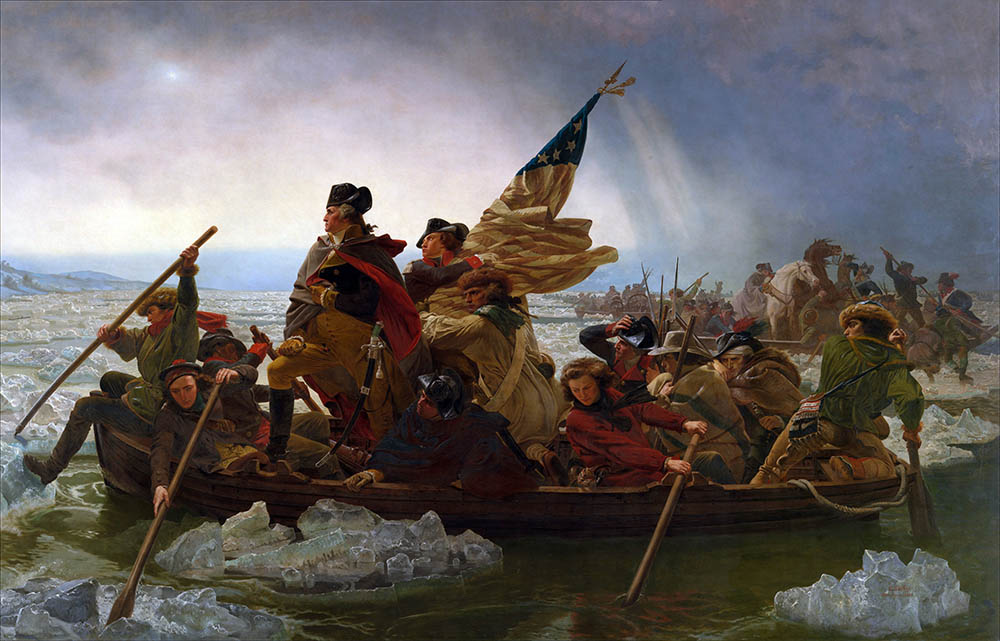 Use this Narrative with The Battle of Saratoga and the French Alliance Narrative, the Joseph Plumb Martin, The Adventures of a Revolutionary Soldier, 1777 Primary Source, and the Art Analysis: Washington Crossing the Delaware Primary Source to give students an understanding of what Revolutionary soldiers may have faced during the war.

The Battle of New York was a disaster for General George Washington and his Continental Army. In the summer of 1776, thirty-two thousand British and Hessian mercenary troops routed the Continentals on Long Island. With the advantage of unchallenged naval supremacy in the waters around New York, the Royal Navy outflanked the Americans and could land troops anywhere. The British soldiers chased the Continental Army across Manhattan. By November, they had captured Fort Washington, but not the man for whom it was named, who had retreated across the Hudson River to New Jersey.

British generals William Howe and Charles Cornwallis closely pursued Washington as he raced through the New Jersey countryside. By late November, Washington’s army was dwindling rapidly. Thousands of enlistments were expiring and hundreds of men simply returned to their farms. Washington, who only had thirty-seven hundred soldiers (although William Heath had four thousand in New York, and Charles Lee had seventy-five hundred in northwestern New Jersey), fruitlessly begged General Lee to send him troops. In early December, Washington reached Trenton and crossed the Delaware, taking all the boats for miles around to prevent them from falling into British hands. Knowing the British could simply wait for the river to freeze and threaten Philadelphia, a terrified Congress fled the city, but not before entrusting Washington with nearly unlimited powers to fight the war.

With many of his men lacking shoes and adequate clothing, and often going hungry, Washington had warned Congress that “ten days more will put an end to the existence of our army.” Revolutionary financier and merchant Robert Morris then dispatched wagons of supplies to the army from Philadelphia. To help the army persevere during its darkest hour, Thomas Paine, author of Common Sense, bolstered American morale with stirring words in a new pamphlet, The American Crisis:

These are the times that try men’s souls. The summer soldier and the sunshine patriot will, in this crisis, shrink from the service of their country; but he that stands by it now, deserves the love and thanks of man and woman.

On December 14, with the apparent end of the campaigning season, the British commanders marched back to New York to enter winter quarters. They left only a small garrison of Hessians at Trenton under the command of Colonel Johann Rall, who neglected his duty to build defenses around the town. A week later, two thousand new American soldiers arrived at Washington’s camp.

Washington faced a moment of decision. The enlistments of thousands of men would expire on January 1, 1777, so he decided to launch a bold strike against the garrison at Trenton on Christmas Day. As darkness fell, a nor’easter raged, deluging the men with rain, hail, and snow. The temperature plummeted and the winds howled.

Three different army groups were supposed to cross the Delaware for the attack, but the two southern groups failed because of the turbulent river. After it successfully landed ten miles above Trenton, Washington’s group split into two columns, advancing through severe weather that many men had to endure shoeless with bloody, frozen feet. The two forces descended upon the town from the north and west several hours behind schedule, around eight o’clock in the morning on December 26.

Contrary to myth, the Hessians were not sleeping off drunkenness from Christmas celebrations, but they did not expect an attack in such wintry weather and had relaxed their guard. Roused from their beds by the first shots fired when Washington’s forces entered the town, they suffered one hundred casualties. Nine hundred surrendered, and five hundred escaped. Only a handful of Americans were wounded, including Virginian James Monroe. Washington told a general, “This is a glorious day for our country.” The Americans went back across the Delaware with the victory they so desperately needed.

Washington and his generals wanted to strike again before the enlistments expired, especially when British general Charles Cornwallis marched from New York with eight thousand redcoats. So the American army crossed the Delaware yet again, this time as arctic temperatures froze the river and allowed most of the men to walk across. They brought thirty guns, took up positions in Trenton, and slept in the bitter cold.

On December 31, Washington offered the men a generous ten-dollar bounty for six more weeks of service. Some took the offer, but no one else stepped forward until Washington made this patriotic appeal:

My brave fellows, you have done all I asked you to do, and more than could be reasonably expected; but your country is at stake, your wives, your houses, and all that you hold dear. You have worn yourselves out with the fatigues and hardships, but we know not how to spare you. If you will consent to stay only one month longer, you will render that service to the cause of liberty, and to your country, which you probably can never do under any other circumstances.

Many men agreed, and Washington’s army grew to almost seven thousand men. On January 2, after Cornwallis’s army had marched on Trenton and skirmished with American forces, the British general chose to delay, confidently saying of Washington, “We’ve got the old fox safe now. We’ll go over and bag him in the morning.” That evening, the British observed the Americans lighting campfires and making a lot of noise in camp, and they fell for the ruse. Most of Washington’s forces were quietly slipping away toward Princeton in the night.

Washington’s men completed the ten-mile march over ice and snow and encountered the British garrison at Princeton at dawn. There, however, they faltered until Washington rode up and valiantly rallied his troops to turn the tide. “Parade with us!” he shouted. “There is but a handful of the enemy, and we will have them directly!” The army drove on to the college, where Alexander Hamilton’s artillerymen blasted the British garrison. Meanwhile, when Cornwallis discovered he had been duped, he marched on Princeton. Washington wanted to continue the attack, but wisely he decided his exhausted men had given all they could. His army went into winter quarters at Morristown.

1. Which of the following best describes the goal of Washington’s famed crossing of the Delaware River on December 25, 1776?

2. Which of the following was not a difficulty faced by Washington in the winter of 1776?

3. Which of the following best explains the significance of the victory at Trenton from the viewpoint of the Americans?

4. Which of the following actions best illustrates Washington’s strategy of innovation and necessity?

5. Which of the following best describes the condition of Washington’s army in 1776?

6. Which of the following best describes one of the British military’s most important advantages?

7. How were many of the Continental army’s needs financed in the winter of 1776?

“These are the times that try men’s souls. The summer soldier and the sunshine patriot will, in this crisis, shrink from the service of their country; but he that stands [by] it now, deserves the love and thanks of man and woman. Tyranny, like hell, is not easily conquered; yet we have this consolation with us, that the harder the conflict, the more glorious the triumph. What we obtain too cheap, we esteem too lightly: it is dearness only that gives every thing its value. Heaven knows how to put a proper price upon its goods; and it would be strange indeed if so celestial an article as freedom should not be highly rated. Britain, with an army to enforce her tyranny, has declared that she has a right (not only to tax) but – to bind us in all cases whatsoever,’ and if being bound in that manner, is not slavery, then is there not such a thing as slavery upon earth. Even the expression is impious; for so unlimited a power can belong only to God.”

1. Which specific British law best illustrated Paine’s point that the British intended to recognize no limitations on their rule?

2. Which of the following constitutional principles is most evident in the excerpt provided?

Ferling, John. Whirlwind: The American Revolution and the War that Won It. New York: Bloomsbury Press, 2015.