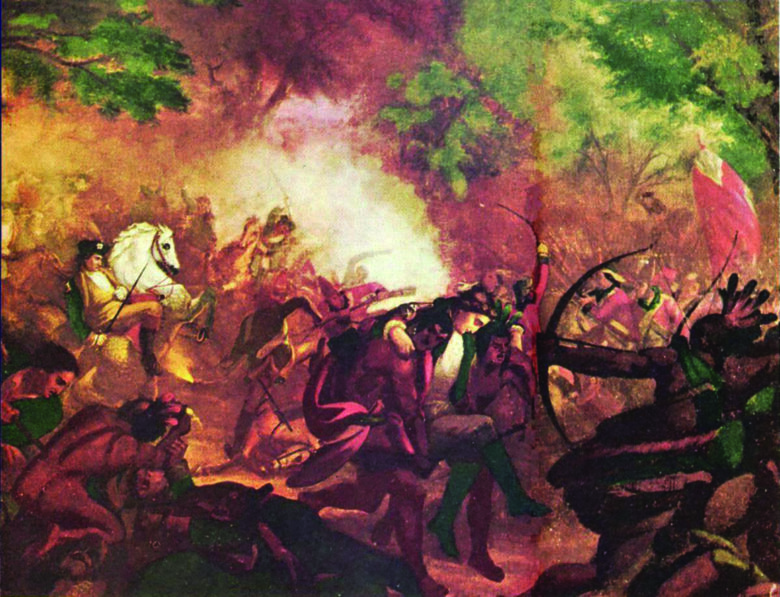 Use this Narrative with the Washington Crossing the Delaware Narrative and the Joseph Plumb Martin, The Adventures of a Revolutionary Soldier, 1777 Primary Source to give students an understanding of what Revolutionary soldiers may have faced during the war.

If the Patriots were to be successful in their fight against the British, they would need resources they did not possess. In late 1775, the Continental Congress opened covert negotiations with the French for diplomatic recognition, loans, and war supplies. Guided less by sympathy for the American cause than by European politics and a desire to avenge France’s loss to Britain in the Seven Years’ War, Louis XVI agreed to a one million livre loan and funneled essential supplies to the Americans.

In late 1776, Congress sent Benjamin Franklin to Paris to negotiate a treaty of alliance and commerce with France. A cosmopolitan man of the Enlightenment and an international celebrity known for his scientific discoveries. Franklin quickly won over Parisians with his unique style. Rather than mimic the ornate fashions of French aristocracy, he dressed as a rustic backwoods philosopher in plain republican clothing and a beaver cap. Franklin gained additional loans to purchase essential war material, but the French were hesitant to formalize ties with the Americans until the rebels had won significant victories on the battlefield. Meanwhile, New York general Philip Schuyler was in command of American troops in early June when British general John Burgoyne’s army sailed down Lake Champlain and threatened Fort Ticonderoga, which the small American garrison had recently abandoned. General Washington was alarmed by Burgoyne’s movements and sent a couple of thousand men, including eight hundred sharpshooting Green Mountain Boys, to swell Schuyler’s army to more than six thousand.

The British pursued Schuyler’s army south toward Albany, but their progress was impeded when the Americans felled trees, altered the paths of creeks, and destroyed bridges in their wake. The British thus ran low on supplies, and in mid-August, American brigadier general John Stark ambushed a British foraging party and inflicted nearly nine hundred casualties.

The Continental army nearly doubled in size to more than eleven thousand when New England militiamen joined to defend their region and Washington sent Daniel Morgan and his Virginia riflemen north. After the British reached Saratoga on September 15, the rebels, with General Horatio Gates now in command, moved to take the high ground at Bemis Heights.

On September 19, Burgoyne’s force marched against them in three columns. An epic battle followed, with both sides attacking throughout the day. Morgan’s sharpshooters kept up their fire from surrounding woods, and Benedict Arnold’s left wing assaulted the British lines. The Americans withdrew that night, but the battle had cost the British nearly six hundred casualties.

British general Henry Clinton marched north from New York and could have helped Burgoyne turn the tide at Saratoga, but he never arrived. Instead, he seized a couple of forts, cut the chain that had stopped the Royal Navy from sailing up the Hudson, and returned to the garrison. With supplies running low, Burgoyne’s troops dug in and waited for reinforcements that did not come.

On October 7, another battle with the Americans forced Burgoyne to withdraw to Saratoga. Gates pursued and surrounded the British, cutting off escape. Ten days later, the redcoats and their allies surrendered their arms, agreeing to return to England for the duration of the war. Gates had captured fifty-eight hundred prisoners, twenty-seven field pieces, and five thousand small arms, as well as ammunition and supplies. It was the most significant American victory in the war to date.

Saratoga provided the French with the confidence to sign treaties of alliance and trade with the Americans and join the war against the British. The new allies agreed they would continue the war until the colonies were independent, and neither would make a separate peace with Britain. That spring, the first French fleet sailed to North America, while French armies under the Comte de Rochambeau and volunteers such as the Marquis de Lafayette fought alongside the Continental Army. The French alliance was of critical importance to the American war effort and brought critical financial support and essential war material to the fledgling American army. With their corps of trained engineers, navy, and marines, the French made significant contributions to the cause.

1. All the following were factors in securing French aid to the Americans during the Revolution except

2. How did the French alliance change the war for the Americans?

3. Who was the prominent American sent to France to secure an alliance during the war?

4. How did the Continental Army successfully thwart the British in the forests of New York?

5. All the following resulted from the Battle of Saratoga except

6. Which of the following was not a result of the French alliance during the American Revolution?

1. The image shown could be used to support which one of the following conclusions?

2. Which of the following best describes the causal link between the America victory at Saratoga and French military aid to Americans?

“Sir: We have now the great satisfaction of acquainting you and the Congress that the treaties with France are at length completed and signed. The first is a treaty of amity and commerce, much on the plan of that projected in Congress; the other is a treaty of alliance, in which it is stipulated that in case England declares war against France, or occasions a war by attempts to hinder her commerce with us, we should then make common cause of it and join our forces and councils, etc. The great aim of this treaty is declared to be to ‘establish the liberty, sovereignty, and independency, absolute and unlimited, of the United States, as well in matters of government as commerce;’ and this is guarantied to us by France, together with all the countries we possess or shall possess at the conclusion of the war; in return for which the States guaranty to France all its possessions in America.”

3. Which of the following best describes the context of the excerpt provided?

4. What was the primary goal of the French in signing the treaty described in the except provided?

Ferling, John. Whirlwind: The American Revolution and the War that Won It. New York: Bloomsbury Press, 2015.