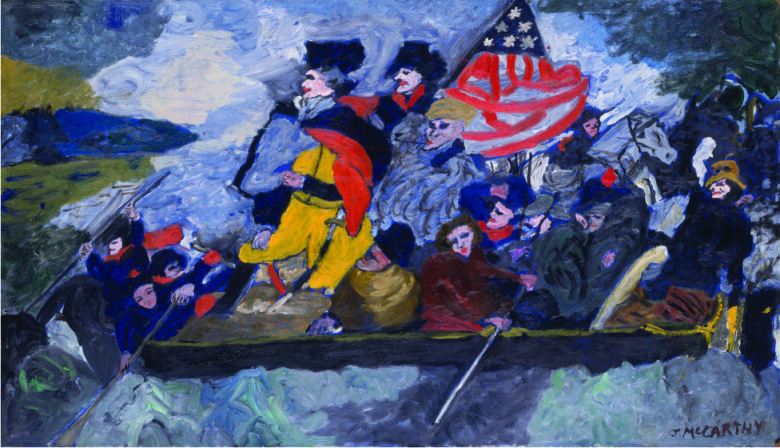 On a cold night in December 1776, the situation was desperate for General Washington’s army. His men were in disarray and being pursued by a professional army of one of the most powerful countries on earth. In desperation, Washington decided to cross the Delaware River and lead a surprise attack on a Hessian garrison camped in Trenton, New Jersey. Seventy-five years after this event, German artist Emanuel Leutze created his famous depiction of this scene. Leutze grew up in America but returned to Germany as an adult. He painted this work during the revolutions of 1848, a series of political upheavals throughout Europe. The painting is large at just over 12 feet high by 21 feet long. Leutze took several artistic liberties in his work. Most of Washington’s army crossed the river in shallow Durham boats—wide, flat boats with high sides. The high walls were sturdy enough to survive crossing an icy river. The men likely would have stood as they crossed, because the bottom of the boats would be wet, cold, and uncomfortable. Horses and artillery went across in larger ferries. The men crossed at around eleven o’clock at night in the middle of a strong storm that brought wind, freezing rain, and snow. Look carefully at the painting for several moments before answering the questions that follow.

Leutze’s most famous work has been copied many times in American art. Consider the two following pieces of modern art before answering the Historical Reasoning Questions.