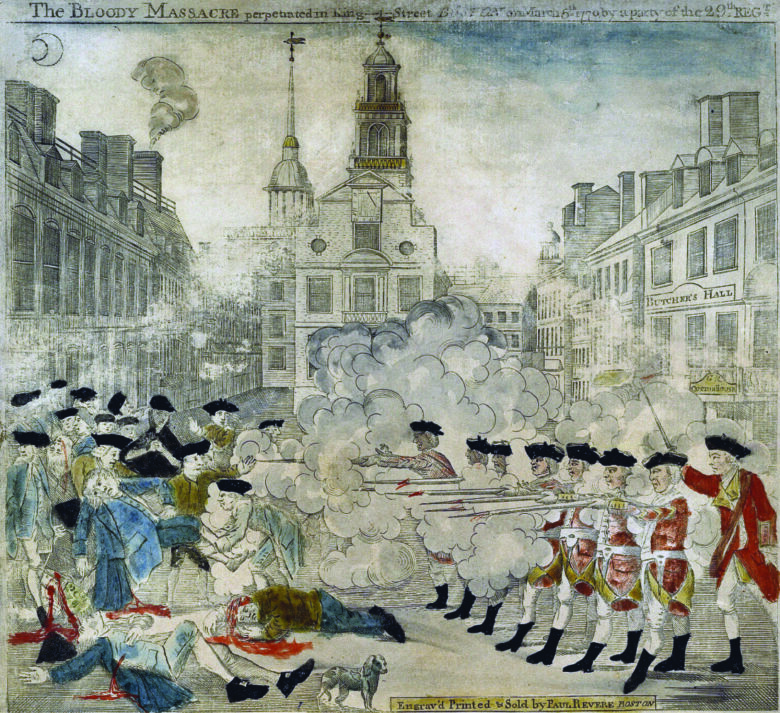 Use this Narrative with the Stamp Act Resistance Narrative and The Boston Tea Party Narrative following the Acts of Parliament Lesson to show the growing tensions between England and the colonies.

In late 1767, Parliament passed the Townshend Acts, which taxed the colonists on purchases of British lead, glass, paint, paper, and tea. The British also headquartered customs officials in Boston to collect the new round of taxes and enforce trade regulations more stringently. The colonists could buy only British goods, and now those goods were hit with tariffs that meant there was no limit to Parliament’s taxing power, because the colonists were forbidden to manufacture many of their own goods.

Colonial reaction was swift. John Dickinson wrote in Letters from a Farmer in Pennsylvania that if Parliament succeeded in “taking money out of our pockets without our consent . . . our boasted liberty is but . . . a sound and nothing else.” Massachusetts sent other colonies a circular letter drafted by Samuel Adams denouncing the taxes. In Williamsburg, George Mason and George Washington followed the example of other colonies by creating an agreement not to import any British goods. Throughout the colonies, women held spinning bees, gatherings in their homes where they made homespun clothing as a symbol of republican simplicity to replace imported luxuries.

Bostonians protested the taxes in the streets, assembled at town meetings, and threatened customs officials, leading Royal Governor Francis Bernard to dissolve the assembly. The British also dispatched four thousand redcoats as a show of force to pacify the city. Many colonists considered the peacetime presence of this standing army, which their legislatures did not invite, a grave threat to their liberties and a gross violation of the 1689 English Bill of Rights. Its presence strained an already tense atmosphere. John Adams, cousin of Samuel Adams, wrote later that the troops’ “very appearance in Boston was a strong proof to me, that the determination in Great Britain to subjugate us was too deep and inveterate ever to be altered by us.” Fights erupted in taverns and streets as mobs of townspeople wielded insults, clubs, swords, and shovels against redcoats armed with bayonets.

On the morning of February 22, 1770, a crowd of hundreds threatened a merchant, Theophilus Lillie, who had violated the boycott of British goods. After Lillie’s neighbor, Ebenezer Richardson, rushed to his aid, the throng chased Richardson, who retreated inside his own house. The crowd lobbed taunts and rotten food. As his windows shattered, Richardson fired into the crowd, killing an eleven-year-old boy. The mob seized Richardson, beat him senseless, and nearly hanged him. Samuel Adams used the incident to portray the dead boy as a martyr to British tyranny and organized a funeral procession attended by thousands.

A few days later, near the customs house, a group of hostile boys insulted a young sentry who responded by smashing the butt of his musket into a boy’s head. The church bells tolled, bringing hundreds of citizens into the streets to pelt the sentry with snowballs, rocks, and ice. Captain Thomas Preston marched a few men out to relieve the sentry, forming a line and ordering the crowd to disperse. In the skirmishes that followed, one soldier was knocked down by a club; he rose and discharged his musket. The rest of the soldiers fired a volley that struck eleven Bostonians, instantly killing three and mortally wounding two more. Preston and his men were jailed that night, and the rest of the troops relocated to a fort in Boston harbor, narrowly averting a full-scale battle.

Patriot leaders seized on the “massacre” for a public relations victory. The British government – responsible for protecting its subjects’ rights to life, liberty, and property – in the years since the French and Indian War had seemed to seize colonists’ property and curtail their liberty; now its soldiers had taken their lives. Ten thousand mourners attended the funeral procession staged by Samuel Adams. Silversmith Paul Revere contributed an engraving showing bloodthirsty soldiers firing at innocent civilians; it was mostly propaganda but served to galvanize many colonists’ feelings about British oppression.

John Adams, then a practicing lawyer, defended the British soldiers in court, an unpopular decision that nevertheless defined his stand for justice and the rule of law. Preston was judged not to have given an order to fire and was acquitted. Most of the soldiers were also acquitted on the grounds of self-defense. Adams had proved that in the colonies, the law was supreme. He staked his public reputation and Patriot credentials on the principle that the traditional rights of Englishmen were deserved by all, even hated British soldiers who had slain five colonists. His courageous act contributed to a relative calm that lasted a few years. Meanwhile, Parliament revoked the hated Townshend Acts, except, fatefully, the tax on tea.

1. Which of the following methods was not used by colonists to protest the Acts passed by Parliament after the French and Indian War?

2. The Boston Massacre refers to

3. Which of the following provides an example of colonists participating in an economic protest against the Townsend Acts?

4. What was the effect of the Boston Massacre engraving and funeral procession in other colonies?

5. What was John Adams’ intention when he defended the British redcoats involved in the Boston Massacre?

6. Which of the following was Britain’s direct response to the Boston Massacre?

7. Which of the following best contextualizes the Boston Massacre?

“And thereupon the said Lords Spiritual and Temporal and Commons, pursuant to their respective letters and elections, being now assembled in a full and free representative of this nation, taking into their most serious consideration the best means for attaining the ends aforesaid, do in the first place (as their ancestors in like case have usually done) for the vindicating and asserting their ancient rights and liberties declare

That the pretended power of suspending the laws or the execution of laws by regal authority without consent of Parliament is illegal;

That the pretended power of dispensing with laws or the execution of laws by regal authority, as it hath been assumed and exercised of late, is illegal;

That the commission for erecting the late Court of Commissioners for Ecclesiastical Causes, and all other commissions and courts of like nature, are illegal and pernicious;

That levying money for or to the use of the Crown by pretence of prerogative, without grant of Parliament, for longer time, or in other manner than the same is or shall be granted, is illegal;

That it is the right of the subjects to petition the king, and all commitments and prosecutions for such petitioning are illegal;

That the raising or keeping a standing army within the kingdom in time of peace, unless it be with consent of Parliament, is against law.”

1. The principle expressed in the English Bill of Rights that contributed most to the tensions in Boston was

2. Taken as a whole, the English Bill of Rights most clearly demonstrates the British belief in the principle of

“The mob still increased and were more outrageous, striking their clubs or bludgeons one against another, and calling out, come on you rascals, you bloody backs, you lobster scoundrels, fire if you dare, G-d damn you, fire and be damned. . . . At this time I was between the soldiers and the mob, parleying with, and endeavouring all in my power to persuade them to retire peaceably, but to no purpose. . . .

On this a general attack was made on the men by a great number of heavy clubs and snowballs being thrown at them, by which all our lives were in imminent danger, some persons at the same time from behind calling out, damn your bloods-why don’t you fire. Instantly three or four of the soldiers fired, one after another, and directly after three more in the same confusion and hurry. The mob then ran away, except three unhappy men who instantly expired, in which number was Mr. Gray at whose rope-walk the prior quarrels took place; one more is since dead, three others are dangerously, and four slightly wounded. The whole of this melancholy affair was transacted in almost 20 minutes. On my asking the soldiers why they fired without orders, they said they heard the word fire and supposed it came from me. This might be the case as many of the mob called out fire, fire, but I assured the men that I gave no such order; that my words were, don’t fire, stop your firing.”

3. The excerpt gives historians insight into the

4. An important consequence of the account described in the excerpt was that the

5. Which of the following best describes a reaction to the event described in the excerpt?

Archer, Richard. As If an Enemy’s Country: The British Occupation of Boston and the Origins of Revolution. Oxford: Oxford University Press, 2010.