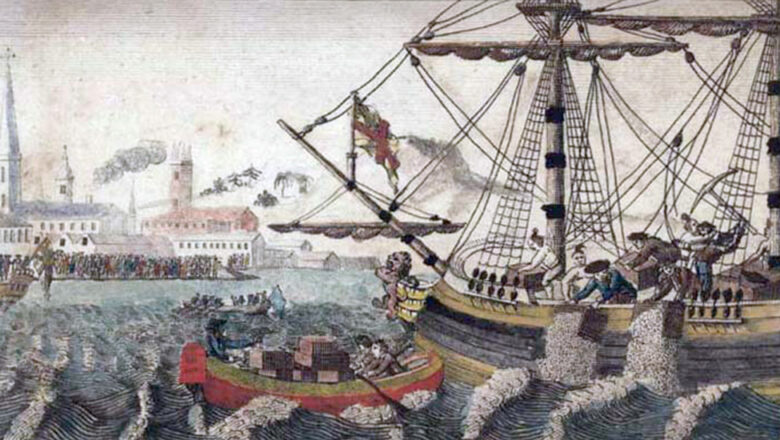 Use this Narrative with the Stamp Act Resistance Narrative and The Boston Massacre Narrative following the Acts of Parliament Lesson to show the growing tensions between England and the colonies.

After a couple of years of relative calm following the repeal of the Townshend Acts, tension between the British and their colonies escalated when Parliament passed the Tea Act in 1773. This act, which granted the British East India Company a monopoly on tea sales in the colonies, was intended to bail out the financially faltering company, whose failure would have upset the entire imperial economy. Charles Townshend, Chancellor of the Exchequer, told Parliament that the goal of this act was as much to retain the power to tax the colonies on British goods as it was to collect revenue from the existing tax on tea.

The colonists resisted the Tea Act more because it violated the constitutional principle of self-government by consent than because they could not afford the tax, which had existed since the passage of the 1767 Townshend Revenue Act. As George Washington explained, “What is it we are contending against? Is it against paying the duty of [three pence per pound] on tea because [it is] burdensome? No, it is the right only . . . that, as Englishmen, we could not be deprived of this essential and valuable part of our constitution.”

In the ports of New York, Philadelphia, and Charleston, citizens prevented British tea from being unloaded, threatened tax collectors into resigning, and protested taxation without representation. In Boston, political organizer Samuel Adams oversaw the adoption of resolutions calling on the tea agents to resign, but they refused. On November 28, however, the Dartmouth dropped anchor in Boston Harbor loaded with 114 crates of British tea. Its colonial owner, Francis Rotch of Nantucket Island, had a great deal of money invested in the cargo and wanted it unloaded, but Patriot leaders wanted to use the landing of the tea to galvanize the people against the British. They also feared that if the tea were landed and sold at cheaper prices, people would continue buying it and ruin the boycott.

The following day, a crowd of five or six thousand people warned Rotch that landing the tea would be at his “peril,” posted a guard around the ship, and demanded that it return to England. But Thomas Hutchinson, a staunch Loyalist who now served as royal governor, refused to allow the Dartmouth‘s departure. With twenty days to either unload the cargo and pay taxes or forfeit both the tea and the ship, Rotch found himself in a terrible position.

Over the next week, two more ships laden with tea berthed beside the Dartmouth at Griffin’s Wharf. Many people predicted imminent violence. As Abigail Adams wrote, “The flame is kindled . . . Great will be the devastation if not timely quenched or allayed by some more lenient measures.” On December 14, thousands again demanded that Rotch seek clearance for a return voyage to England, but Hutchinson again refused the request. Three British warships now stood in the harbor ready to enforce his order. Matters were coming to a head.

On December 16, one day before the deadline for the landing of the tea, more than seven thousand gathered in the Old South Meeting House, Boston’s largest building. When Samuel Adams announced that nothing more could be done to save their country, dozens of colonists, dressed like Indians as a symbol of American freedom and to disguise their identities from British authorities, entered the assembly with piercing war whoops. The crowd went into a frenzy, screaming, “The Mohawks are come!” John Hancock called on his countrymen to do their patriotic duty: “Let every man do what is right in his own eyes.” Thousands of citizens spilled into the streets and watched as the band of Mohawk impersonators boarded the three ships and dumped into the harbor ninety thousand pounds of tea worth £10,000 (millions of dollars today). The crowd then slowly dispersed into the night while the disguised participants went home with their identities still concealed.

Although some colonists saw the Boston Tea Party as a destructive mob action, most praised the protest. “This is the most magnificent movement of all,” John Adams rejoiced. “This destruction of the tea is so bold, so daring . . . and so lasting, that I cannot but consider it as an epoch in history.” He thought the colonists had had no choice: “To let it be landed, would be giving up the principle of taxation by parliamentary authority, against which the continent has struggled for ten years.”

Most members of the British Parliament were furious when they learned of the Boston Tea Party. Their response was swift and harsh. In early 1774, Parliament passed several acts collectively known as the Coercive Acts. The Boston Port Act closed the harbor to trade until restitution was made for the tea. The Massachusetts Government Act banned town meetings and placed the legislature under greater royal control. The Impartial Administration of Justice Act allowed British officials to be tried in England for capital crimes, escaping colonial justice and local juries. The Quartering Act required the housing of troops in unoccupied buildings and homes. Although not officially a Coercive Act, the Quebec Act gave French Canada the land between the Ohio and Mississippi Rivers, revoking colonists’ claims on the frontier and raising the specter of a Roman Catholic enemy to their west, which many Protestant colonists equated with civil and religious absolutism because it granted freedom of worship to Catholics. Finally, British general Thomas Gage replaced Hutchinson, a Boston-born civilian, as governor of Massachusetts. Gage’s instructions were to enforce the acts and prosecute the leaders of the resistance.

The colonists labeled the new laws the “Intolerable Acts,” for they systematically abridged the liberties they held sacred and inviolable. If the destruction of the tea was against the law, then the individuals responsible should have been brought to trial. Group punishment was unacceptable and completely abhorrent to the rule of law. The Coercive Acts trampled on their economic liberty, their right of self-government by their own consent and elections, their right to a trial by jury, and their right to property. All along, the colonists had insisted on enjoying the full liberties of free English people. Now, however, it seemed they were being ruled, like the Irish, as conquered foreigners.

From New England to the lower South, the Coercive Acts galvanized colonists against a common foe. As Washington asserted, “the cause of Boston . . . now is and ever will be considered as the cause of America.” The members of the Virginia House of Burgesses concurred. Despite their Williamsburg assembly being dissolved by their royal governor, Lord Dunmore, they reconvened down the street at Raleigh Tavern, declaring themselves the people’s representatives and announcing that “an attack, made on one of our sister colonies, to compel submission to arbitrary taxes, is an attack made on all British America, and threatens ruin to the rights of all.” They called for a boycott on British imports and asked the other colonies to send delegates to a Continental Congress. Representatives from twelve colonies met at the Continental Congress in Philadelphia that autumn to declare their rights and refuse British trade.

1. All the following constitutional principles directly prompted the colonists to participate in the Boston Tea Party except

2. Which of the following best explains the justification for Parliament to pass the Intolerable Acts, or Coercive Acts?

3. Which of the following was the colonists’ primary reason for protesting the Tea Act?

4. Which of the following best describes a significant change in British North America after the Boston Tea Party and retaliatory Coercive Acts?

5. Which of the following acts of legislation was not part of the Coercive Acts?

6. Which of the following best describes Patriotic upheaval in Boston?

“But let us coolly enquire, what is the reason of this unheard of innovation [the Coercive Acts]. Is it to make them peaceable? My lords, it will make them mad. Will they be better governed if we introduce this change? Will they be more our friends? The least that such a measure can do, is to make them hate us. And would to God, my lords, we had governed ourselves with as much economy, integrity and prudence, as they have done. Let them continue to enjoy the liberty our fathers gave them. Gave them, did I say? They are co-heirs of liberty with ourselves; and their portion of the inheritance has been much better looked after than ours. . . . Instead of hoping that their constitution may receive improvement from our skill in government, the most useful wish I can form in their favor, is that Heaven may long preserve them from our vices and our politics.”

Speech of the Bishop of St. Asaph (Jonathan Shipley), September 1774

1. Which group would most likely agree with the sentiments expressed in the excerpt provided?

2. The Bishop of St. Asaph, Jonathan Shipley, would support which of the following statements?

“I immediately dressed myself in the costume of an Indian, equipped with a small hatchet, which I and my associates denominated the tomahawk, with which, and a club, after having painted my face and hands with coal dust in the shop of a blacksmith, I repaired to Griffin’s wharf, where the ships lay that contained the tea. . . .

We were immediately ordered by the respective commanders to board all the ships at the same time. . . .

We then were ordered by our commander to open the hatches and take out all the chests of tea and throw them overboard, and we immediately proceeded to execute his orders, first cutting and splitting the chests with our tomahawks, so as thoroughly to expose them to the effects of the water.

In about three hours from the time we went on board, we had thus broken and thrown overboard every tea chest to be found in the ship, while those in the other ships were disposing of the tea in the same way, at the same time. We were surrounded [by] British armed ships, but no attempt was made to resist us.

We then quietly retired to our several places of residence, without having any conversation with each other, or taking any measures to discover who were our associates. . . . No disorder took place during that transaction, and it was observed at that time that the stillest night ensued that Boston had enjoyed for many months.”

3. Which of the following best describes the reason for the colonists to dress as American Indians for this protest?

4. The sentiments that inspired the act of protest described in the passage provided are best reflected in which of the following events in U.S. history?

5. A direct result of the actions described in the excerpt provided was