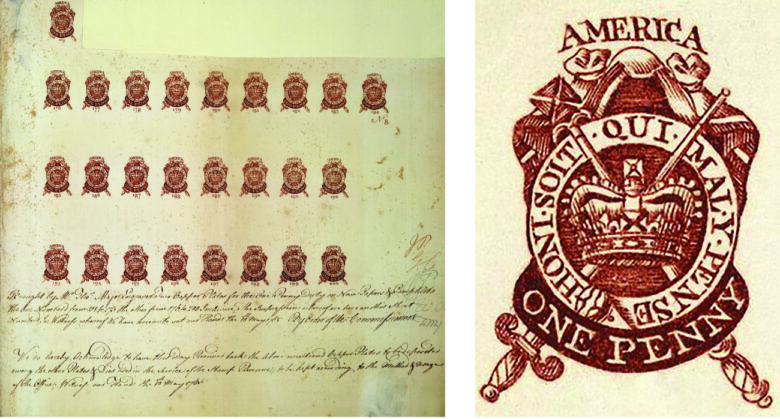 Use this Narrative with The Boston Massacre Narrative and The Boston Tea Party Narrative following the Acts of Parliament Lesson to show the growing tensions between England and the colonies.

British prime minister George Grenville wanted the colonists to pay the cost of stationing British troops on the North American frontier after the French and Indian War. To raise the money, the Stamp Act of 1765 imposed taxes on almanacs, legal documents, newspapers, playing cards – in fact, every kind of printed paper document in the colonies – and even dice. The colonies had been paying relatively low imperial taxes under the Navigation Acts and enjoyed the benefits of imperial trade networks, thus becoming very prosperous. The new act, named for the official stamp verifying that the tax had been paid, reversed a decades-long British policy sometimes called salutary neglect, which allowed the colonists to govern themselves without much interference. It also affected the daily lives of nearly all in the colonies. A broad spectrum of people, from wealthy merchants to ordinary artisans, loudly resisted taxation without representation as a matter of an ancient constitutional principle.

Colonists learned of the impending Stamp Act in late 1764 and immediately petitioned the king and Parliament in protest. The Virginia House of Burgesses claimed the rights of Englishmen under the Magna Carta and argued it was a “fundamental principle of the British constitution . . . that the people are not subject to any taxes but such are laid on them by their own consent.” The burgesses asserted that the violations of their natural and traditional rights made them “slaves of Briton” – an ironic statement coming from slave-owning planters.

In April 1765, the colonists learned that the king had ignored their petitions and approved the Stamp Act. On May 29, Patrick Henry proposed several controversial resolutions in the House of Burgesses that stirred up a lively debate. The burgesses voted for the first four resolutions, which claimed the rights of Englishmen and declared Virginians would tax and govern themselves as a matter of justice. Thomas Jefferson, then a student at the College of William and Mary, observed the “most bloody debate” over the more contentious fifth resolution, which stated that the “General Assembly of this colony have the only and sole and exclusive right and power to lay taxes,” and that any attempt by Parliament to tax the colonies “has a manifest tendency to destroy British as well as American freedom.” The following day, when Henry warned against tyrants, moderate members leaped to their feet, yelling, “Treason!” Despite the verbal fireworks, the fifth resolution passed by a single vote. It was revoked the next day, however, after Henry rode out of Williamsburg.

Colonial newspapers raised the stakes by falsely reporting that the fifth resolution was still law. The Newport Mercury and Maryland Gazette printed the even more radical sixth and seventh resolutions, which Henry had evidently not presented to the House of Burgesses. The sixth asserted that colonists were “not bound to yield obedience to any law or ordinance whatsoever designed to impose any taxation whatsoever upon them.” The seventh warned that anyone who supported the Stamp Act was “an enemy to this his majesty’s colony.” Colonists were electrified by the boldness of what they read.

On the morning of August 14, Boston protesters hanged an effigy of Andrew Oliver, a Massachusetts government official responsible for enforcing the Stamp Act, from a “liberty tree.” Thousands of angry Bostonians then paraded the effigy through the town and tore down Oliver’s “Stamp Office” building. That night, using wood from the destroyed building, they marched to Oliver’s home and built a bonfire. They decapitated the effigy and threw it into the fire before attacking Oliver’s home. Oliver resigned the next day. On the night of August 26, a mob of artisans, laborers, and sailors dismantled the home of Lieutenant Governor Thomas Hutchinson, plundering valuables while shouting “Liberty and property!” to protest the Stamp Act and taxation without consent.

No one was ever brought to trial for the August riots in Boston. Similar threatening actions occurred across the colonies as stamp collectors were forced to resign. Irate citizens burned effigies, tore down collectors’ homes, and even began the process of burying one collector alive until he relented and resigned his office. The protestors began calling themselves the Sons of Liberty.

In October, twenty-seven delegates from nine colonies met in New York to decide on a unified response to British taxes. At this Stamp Act Congress, the delegates issued a declaration of rights, asserting, “It is inseparably essential to the freedom of a people, and the undoubted right of Englishmen, that no taxes be imposed on them, but with their own consent, given personally, or by their representatives.” Many colonial merchants agreed not to import British goods, applying pressure by pinching the profits of British merchants and manufacturers. Aided by British merchants who then petitioned the king and Parliament to rescind the taxes, members of the colonial resistance persuaded the new British ministry to repeal the Stamp Act. Parliament, however, also passed the Declaratory Act, insisting that it had the right to legislate for the colonies “in all cases whatsoever.”

With Parliament firmly declaring its authority over the colonies while many colonists were encouraged by their successful resistance, the stage seemed set for future conflict. Other outcomes remained possible, however. Would the British allow the colonial legislatures to tax themselves and contribute to the cost of Empire, as had been the custom? The colonists were generally satisfied, loyal subjects who wanted to remain part of the British Empire. Could they moderate their actions? From the vantage point of 1766, the course of imperial relations seemed impossible to predict.

1. Which of the following would not have been taxed by the Stamp Act?

2. What was the purpose of the Stamp Act?

3. What does “taxation without representation” mean?

4. Which colony was the first to organize a legislative protest against the introduction of the Stamp Act?

5. The Stamp Act overturned the policy of salutary neglect, which for years had

6. Which of the following is the most accurate statement about the Sons of Liberty?

7. Which of the following does not describe a significant effect of the Stamp Act Congress?

“The members of this Congress, sincerely devoted, with the warmest sentiments of affection and duty to His Majesty’s Person and Government . . . esteem it our indispensable duty to make the following declarations of our humble opinion, respecting the most essential rights and liberties Of the colonists, and of the grievances under which they labour, by reason of several late Acts of Parliament. . . .

That His Majesty’s liege subjects in these colonies, are entitled to all the inherent rights and liberties of his natural born subjects within the kingdom of Great-Britain.

That it is inseparably essential to the freedom of a people, and the undoubted right of Englishmen, that no taxes be imposed on them, but with their own consent, given personally, or by their representatives.

That the people of these colonies are not, and from their local circumstances cannot be, represented in the House of Commons in Great-Britain.

That the only representatives of the people of these colonies, are persons chosen therein by themselves, and that no taxes ever have been, or can be constitutionally imposed on them, but by their respective legislatures. . . .

Lastly, That it is the indispensable duty of these colonies, to the best of sovereigns, to the mother country, and to themselves, to endeavour by a loyal and dutiful address to his Majesty, and humble applications to both Houses of Parliament, to procure the repeal of the Act for granting and applying certain stamp duties. . . .”

1. Which of the following statements best describes the purpose of the Stamp Act Congress as demonstrated by the excerpt?

2. The Stamp Act Congress based its grievances on which of the following principles?

3. Which of the following best describes the way the English tradition of rights shaped colonial resistance to the Stamp Act?

“Q. Do you think it right that America should be protected by this country, and pay no part of the expense?

Q. Do you not think the people of America would submit to pay the stamp duty, if it was moderated?

Q. What was the temper of America towards Great-Britain before the year 1763?

Q. And what is their temper now?

A. O, very much altered.

Q. Did you ever hear the authority of parliament to make laws for America questioned till lately?

A. The authority of parliament was allowed to be valid in all laws, except such as should lay internal taxes. It was never disputed in laying duties to regulate commerce.

Q. In what light did the people of America use to consider the parliament of Great-Britain?

A. They considered the parliament as the great bulwark and security of their liberties and privileges, and always spoke of it with the utmost respect and veneration. . . .

Q. And have they not still the same respect for parliament?

A. No; it is greatly lessened.”

Benjamin Franklin Testimony in the British House of Commons, 1766

4. A historian might use the excerpt provided to support

5. Which of the following best describes the response to the excerpt provided?

6. Which of the following groups would most likely support the sentiments and viewpoints provided in the previous answers?

Revere, Paul.A View of the Obelisk under Liberty-Tree in Boston on the Rejoicings for the Repeal of the Stamp Act(1766), engraving. Library of Congress. http://www.loc.gov/pictures/item/2003690787/

Archer, Richard. As If an Enemy’s Country: The British Occupation of Boston and the Origins of Revolution. Oxford: Oxford University Press, 2010.

Maier, Pauline. From Resistance to Revolution: Colonial Radicals and the Development of American Opposition to Britain, 1765-1776. New York: Norton, 1972.