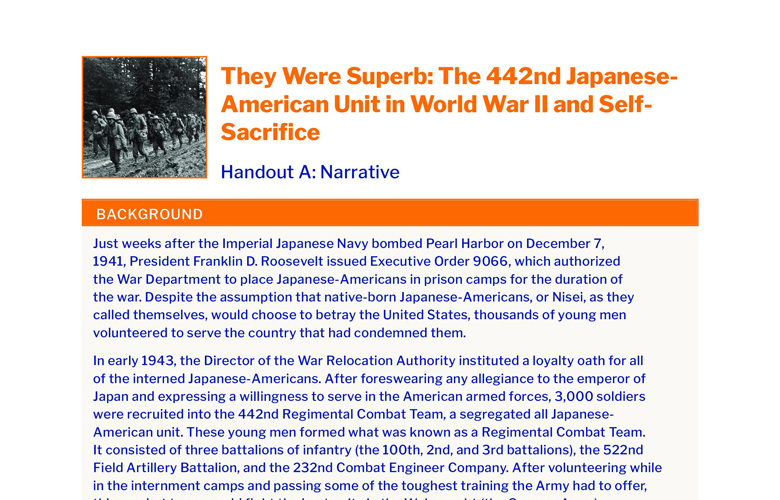 Just weeks after the Imperial Japanese Navy bombed Pearl Harbor on December 7, 1941, President Franklin D. Roosevelt issued Executive Order 9066, which authorized the War Department to place Japanese-Americans in prison camps for the duration of the war. Despite the assumption that native-born Japanese-Americans, or Nisei, as they called themselves, would choose to betray the United States, thousands of young men volunteered to serve the country that had condemned them.

In early 1943, the Director of the War Relocation Authority instituted a loyalty oath for all of the interned Japanese-Americans. After fores wearing any allegiance to the emperor of Japan and expressing a willingness to serve in the American armed forces, 3,000 soldiers were recruited into the 442nd Regimental Combat Team, a segregated all Japanese American unit. These young men formed what was known as a Regimental Combat Team. It consisted of three battalions of infantry (the 100th, 2nd, and 3rd battalions), the 522nd Field Artillery Battalion, and the 232nd Combat Engineer Company. After volunteering while in the internment camps and passing some of the toughest training the Army had to offer, this combat team would fight the best units in the Wehrmacht (the German Army).

Japanese-American Tech Sergeant Abraham Ohama explained why many Nisei fought for a country that treated them poorly, stating, “All of us can’t stay in the [internment] camps until the end of the war. Some of us have to go to the front. Our record on the battlefield will determine when you will return and how you will be treated.”

When the U.S. Army went to Japanese internment camps, they knew they were asking much of people who had little reason to sacrifice for the United States. The recruiters said,

“You may object that this—your life here—is not freedom. The circumstances were not of your own choosing, though it is true that the majority of you and your families accepted the restrictions placed upon your life with little complaint and without deviating from loyalty to the United States.”

The Japanese-American soldiers who did sign up paved the way for a larger regiment when they formed the 100th Infantry Battalion. By February 1943, their dedication and skill convinced the Army to begin training the 442nd Regimental Combat Team, while the 100th Battalion was sent to Italy to join the 34th “Red Bull” Division’s drive on Rome. It did not take long for them to prove their worth.

In January 1944, the 100th was ordered to assault the dreaded German Gustav Line defenses at Monte Cassino. Through perilous minefields, flooded roads, and walls manned by snipers, they advanced. While they made one of the only successful advances of the battle, the 1,432 men of the 100th Battalion were reduced to 571 active-duty soldiers, earning it the nickname, “The Purple Heart Battalion,” after the medal given to U.S. soldiers wounded in combat.

By the summer of 1944, the rest of the 442nd RCT was ready for battle. Their chosen motto was “Go for Broke.” The first test of the whole regiment came against an SS battalion occupying the small town of Belvedere, Italy. Throughout the battle, men like Jack Wakamatsu risked their lives:

“During his company’s movement to better defensive positions, Sergeant Wakamatsu directed by radio the withdrawal of three platoons and several litter cases… He then directed their rearward movement, despite concentrated sniper fire, until they safely reached the company lines.”

Overwhelmed by the 442nd’s fighting spirit, the SS battalion collapsed. For their actions at Belvedere, the 442nd received its first Presidential Unit Citation, an award for the bravery of the entire regiment. But the greatest test of the willingness of the men of the 442nd to lay down their lives was still to come.

In October 1944, the 442nd had been moved to France to take part in the last assault on Germany through the dense forests of the Vosges Mountains. Hitler had ordered the Wehrmacht to fight to the last man in defense of German soil. Ahead of the 442nd, other German soldiers had surrounded the men of the 141st Infantry Regiment and were closing in for the kill. To save their fellow Americans, the 442nd accepted the assignment of breaking through to them, in what would become known as the Rescue of the Lost Battalion.

In the forests of the steep slopes of the Vosges, death waited behind every tree and hedge. The 442nd moved forward at a crawl, picking off enemy machine-gun nests one by one.

For two days, the Nisei dueled the Germans, but the steep terrain meant that they could not take the German positions even when supported by their own tanks and artillery. The Lost Battalion could only be saved by blood. Down the line came an order rarely given in World War II, an order that meant the ultimate effort: Fix bayonets.

On that October day, the I, J, and K companies of the 442nd rose from their positions and charged the German guns. For every man cut down by enemy fire, another took his place. Thirty minutes later, the last Germans scattered, routed by the bravery of the three companies, none of which had more than 20 men left unwounded. The next day, the 211 surviving men of the Lost Battalion were rescued. The 442nd had taken over 800 casualties, including 184 killed, to save their countrymen.

At a ceremony honoring Staff Sergeant Kazuo Masuda, who laid down his life in Italy, General Joseph Stilwell said, “The Nisei bought an awful big hunk of America with their blood…We cannot allow a single injustice to be done to the Nisei without defeating the purpose for which we fought…Who, after all, is the real American? The real American is the man who calls it a fair exchange to lay down his life in order that American ideals may go on living. And judging by such a test, Sergeant Masuda was a better American than any of us here today.”

An Army captain at the same rally said, “Blood that has soaked into the sands of a beach is all of one color. America stands unique in the world, the only country not founded on race, but on a way—an ideal. Not in spite of, but because of our polyglot background, we have had all the strength in the world.” That captain was future President Ronald Reagan.

The Nisei of the 442nd represent self-sacrifice in the most profound sense. They gave their sweat, their blood, and their lives for a country that they loved better than that country loved them, and have deserved all the honor ever paid by a nation to its soldiers. In the words of their commanding General Mark Clark, “They were superb.”