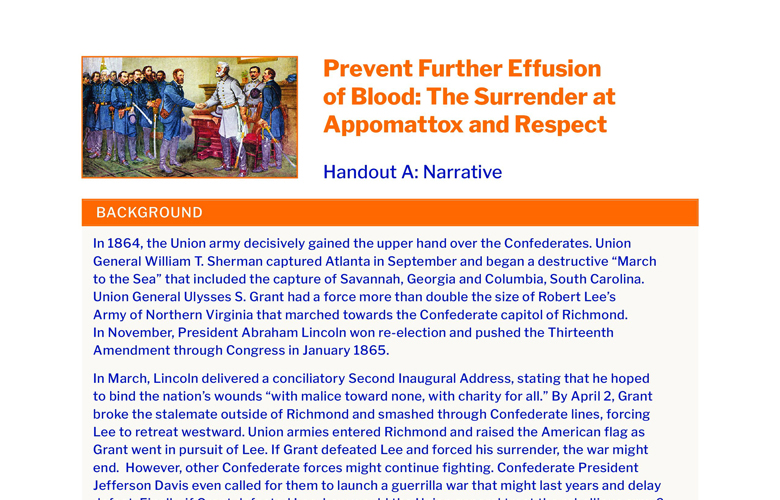 In 1864, the Union army decisively gained the upper hand over the Confederates. Union General William T. Sherman captured Atlanta in September and began a destructive “March to the Sea” that included the capture of Savannah, Georgia and Columbia, South Carolina. Union General Ulysses S. Grant had a force more than double the size of Robert Lee’s Army of Northern Virginia that marched towards the Confederate capitol of Richmond. In November, President Abraham Lincoln won re-election and pushed the Thirteenth Amendment through Congress in January 1865.

In March, Lincoln delivered a conciliatory Second Inaugural Address, stating that he hoped to bind the nation’s wounds “with malice toward none, with charity for all.” By April 2, Grant broke the stalemate outside of Richmond and smashed through Confederate lines, forcing Lee to retreat westward. Union armies entered Richmond and raised the American flag as Grant went in pursuit of Lee. If Grant defeated Lee and forced his surrender, the war might end. However, other Confederate forces might continue fighting. Confederate President Jefferson Davis even called for them to launch a guerrilla war that might last years and delay defeat. Finally, if Grant defeated Lee, how would the Union general treat the rebellious army? Would he treat them as a vanquished foe or magnanimously in order to restore the Union and heal the broken nation after four years of war?

On April 5, 1865, Confederate General Robert E. Lee marched his starving, exhausted men across the swollen Appomattox River to Amelia Court House in central Virginia. In mid afternoon, General Lee was visibly shaken when he was informed that the boxcars on the railroad did not contain the expected rations of food. There was very little forage for his troops in the surrounding countryside, and the Union cavalry under General Philip Sheridan were closing in and burning supply wagons. Lee reluctantly ordered his men to march due west without food. Those soldiers who were firmly committed to the cause set out without complaint, but increasing numbers were deserting the Army of Northern Virginia. Lee realized that he would have to surrender soon.

On April 6, General Lee became even more desperate when Union forces led by General George Custer cut off Lee’s army at Sayler’s Creek. The two sides skirmished for hours, and the battle descended into savage hand-to-hand combat. As his army suffered thousands of casualties, Lee cried out, “My God! Has the army been dissolved?” He tried to rally his troops by picking up a battle flag and riding through their ranks, but the day was lost. The next day, the Rebels retreated across the Appomattox River at Farmville where rations awaited. They thought themselves safe until the Union forces flooded across the main bridge that was foolishly not blown. The hungry Confederates fled again without eating their rations.

On April 7, Union General Ulysses S. Grant wrote to Lee asking for his surrender to prevent “any further effusion of blood.” Grant signed the letter, “Very respectfully, your obedient servant.” Lee responded that while he did not think his position was as hopeless as Grant indicated, he asked what terms the Union Army would offer. With more bluster, Lee told his generals, “I will strike that man a blow in the morning.” When one of the generals suggested accepting the surrender, Lee informed him, “I trust it has not come to that! We certainly have too many brave men to think of laying down our arms.”

On April 8, Lee’s army straggled into the town of Appomattox Court House. It was hopelessly outnumbered six-to-one and had very little chance of resupply or reinforcements. Still, Lee planned a breakout for the next day, which was Palm Sunday. The following morning, as his army dug in and blocked any Confederate escape, Grant suffered a debilitating migraine headache. When the Confederate escape failed miserably, Lee sat down with his generals to discuss surrender. When one of his officers suggested melting away and initiating a guerrilla war, Lee summarily rejected it out of hand. “You and I as Christian men have no right to consider only how this would affect us. We must consider its effect on the country as a whole.” Lee had acted as a general according to an honorable code. He once said, “It is better to do right, even if we suffer in so doing, than to incur the reproach of our consciences and posterity.”

With an extremely heavy heart, Lee sat down and composed a message to Grant asking for “an interview at such time and place as you may designate, to discuss the terms of the surrender of this army.” Grant was greatly relieved to receive this letter. His migraine and all the tension within him immediately dissipated. While puffing on his cigar, he wrote back to Lee and magnanimously offered to meet his defeated foe “where you wish the interview to take place.” An exhausted Lee was napping under an apple tree when an aide brought Grant’s letter and then went in search of a meeting place to surrender. The ceremony would take place at the home of Wilmer McLean, who had moved to Appomattox Court House to escape the war after a cannonball blasted into his kitchen during the First Battle of Bull Run in 1861. Now, the war’s final act would occur in his living room.

Lee was resplendent in his new grey uniform, adorned with a red sash, shiny boots, and his sword in a golden scabbard as he awaited Grant. The Union general arrived with several subordinates and was dressed in a rough uniform with muddy boots. Grant thought that Lee was “a man of much dignity, with an impassible face.” Grant did not outwardly rejoice and respectfully treated his worthy adversary as an equal. They shook hands and exchanged pleasantries.

Grant sat down at a small table to compose the terms of surrender and personally stood and handed them to Lee rather than have a subordinate do it. Grant allowed the Confederate officers to keep their side arms, horses, and baggage. Lee asked that all the soldiers be allowed to keep their horses since many were farmers, and Grant readily agreed. Grant also generously agreed to feed Lee’s hungry men. Their business completed, the two generals shook hands, and Lee departed with a bow to the assembled men.

As Lee slowly rode away, Grant stood on the porch and graciously lifted his hat in salute, which Lee solemnly returned. The other Union officers and soldiers followed their general’s example. Grant was inwardly sad “at the downfall of a foe who had fought so long and valiantly.” Indeed, when the Union camp quickly broke out into a triumphal celebration, Grant rebuked his men and ordered them to stop. “We did not want to exult over their downfall,” he later explained. For his part, Lee tearfully rode back into his camp, telling his troops, “I have done the best I could for you.” He continued, “Go home now, and if you make as good citizens as you have soldiers, you will do well, and I shall always be proud of you.”

On April 12, the Union formally accepted the Confederate surrender. Brigadier General Joshua Chamberlain, the hero of Gettysburg, oversaw a seven-hour parade of Confederate troops stacking their weapons. As the defeated army began the procession, Chamberlain ordered his men to “carry arms” or raise their muskets to their shoulders as a salute of honor to their fellow Americans. Confederate Major General John Gordon returned the gesture by saluting with his sword. Chamberlain described his feelings at witnessing the dramatic, respectful ceremony: “How could we help falling on our knees, all of us together, and praying God to pity and forgive us all.” After a dreadful Civil War, in which 600,000 men died, the Americans on both sides of the war demonstrated remarkable respect for each other.