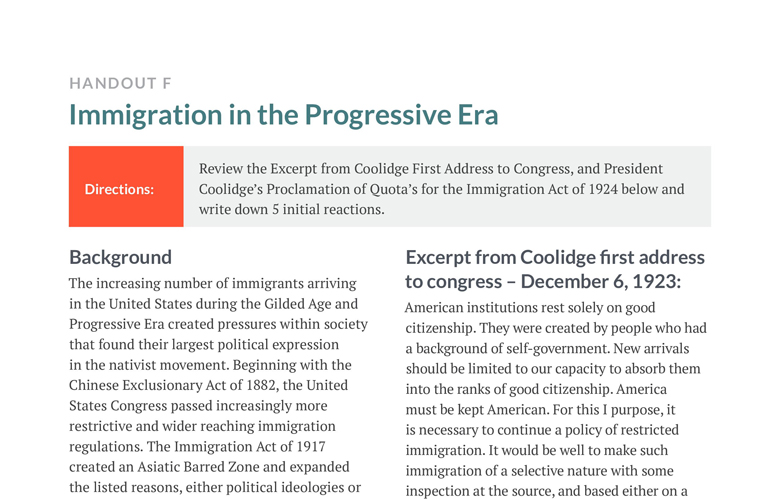 Immigration in the Progressive Era

Directions: Review the Excerpt from Coolidge First Address to Congress, and President Coolidge’s Proclamation of Quota’s for the Immigration Act of 1924 below and write down 5 initial reactions.

The increasing number of immigrants arriving in the United States during the Gilded Age and Progressive Era created pressures within society that found their largest political expression in the nativist movement. Beginning with the Chinese Exclusionary Act of 1882, the United States Congress passed increasingly more restrictive and wider reaching immigration regulations. The Immigration Act of 1917 created an Asiatic Barred Zone and expanded the listed reasons, either political ideologies or illness, which immigrants could not have or be associated with if they wished to gain entrance into the country. In 1921, the Emergency Quota Act, created a national origins formula, which set quota restrictions based on the proportional population of certain immigrant groups. The United States would only permit a number totaling 3% of the total population of certain groups as noted by the census of 1910, to enter the United States. The Immigration Act of 1924 made this formula more restrictive by basing these limits on the census of 1890 instead of the 1910 census and setting the amount at 2% instead of 3%. Calvin Coolidge signed the bill into law in 1924. In both his first address to congress and his proclamation upon signing the bill into law, Coolidge reveals his reasoning behind backing the law. In reviewing his statements, we gain an insight into the thinking, right or wrong, of our nation.

American institutions rest solely on good citizenship. They were created by people who had a background of self-government. New arrivals should be limited to our capacity to absorb them into the ranks of good citizenship. America must be kept American. For this I purpose, it is necessary to continue a policy of restricted immigration. It would be well to make such immigration of a selective nature with some inspection at the source, and based either on a prior census or upon the record of naturalization. Either method would insure the admission of those with the largest capacity and best intention of becoming citizens. I am convinced that our present economic and social conditions warrant a limitation of those to be admitted. We should find additional safety in a law requiring the immediate registration of all aliens. Those’ who do not want to be partakers of the American spirit ought not to settle in America.

“Such officials shall, jointly, report annually to the President the quota of each nationality under subdivision (a) of section 11, together with the statements, estimates, and revisions provided for in this section. The President shall proclaim and make known the quotas so reported” (Sec. 12 e).

Now, therefore I, Calvin Coolidge, President of the United States of America acting under and by virtue of the power in me vested by the aforesaid act of Congress, do hereby proclaim and make known that on and after July 1, 1924, and throughout the fiscal year 1924-1925, the quota of each nationality provided in said act shall be as follows:

GENERAL NOTE.-The immigration quotas assigned to the various countries and quota-areas should not be regarded as having any political significance whatever, or as involving recognition of new governments, or of new boundaries, or of transfers of territory except as the United States government has already made such recognition in a formal and official manner.