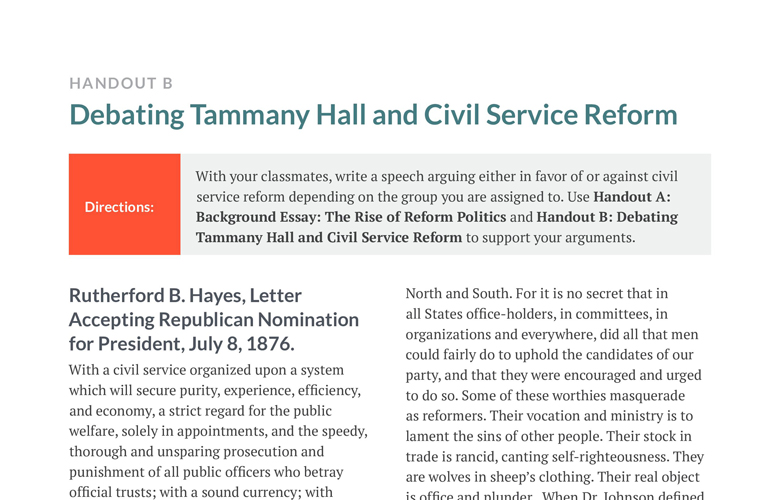 With your classmates, write a speech arguing either in favor of or against civil service reform depending on the group you are assigned to. Use Handout A: Background Essay: The Rise of Reform Politics and Handout B: Debating Tammany Hall and Civil Service Reform to support your arguments.

With a civil service organized upon a system which will secure purity, experience, efficiency, and economy, a strict regard for the public welfare, solely in appointments, and the speedy, thorough and unsparing prosecution and punishment of all public officers who betray official trusts; with a sound currency; with education unsectarian and free to all; with simplicity and frugality in public and private affairs; and with a fraternal spirit of harmony pervading the people of all sections and classes, we may reasonably hope that the second century of our existence as a Nation will, by the blessing of God, be pre-eminent as “an era of good feeling,” and a period of progress, prosperity, and happiness. Very Respectfully,

Some of [the reformers] are men who, by insisting that it is corrupt and bad for men in office to take part in politics, are  striving now to prove that the Republican party has been unclean and vicious all its life, and that the last campaign was venal and wrong and fraudulent, not in some of the States, but in all the States, North and South. For it is no secret that in all States office-holders, in committees, in organizations and everywhere, did all that men could fairly do to uphold the candidates of our party, and that they were encouraged and urged to do so. Some of these worthies masquerade as reformers. Their vocation and ministry is to lament the sins of other people. Their stock in trade is rancid, canting self-righteousness. They are wolves in sheep’s clothing. Their real object is office and plunder. When Dr. Johnson defined patriotism as the last refuge of a scoundrel, he was unconscious of the then undeveloped capabilities and uses of the word “Reform.”

Fellow-Citizens and Friends: I stand before you to-day not as a party man, but as an American citizen, and I see before me both Republicans and Democrats. …

Why do I associate Tammany Hall with corruption? When you read Tammany’s platform and the great speeches delivered by its men you might imagine that Tammany was an academy of sciences and of patriotism. …

But what do they really do? They give one Tammany man who has fifty votes a clerkship, although he cannot read. Another Tammany man who has 100 votes is given a fat contract, and some proprietor of a play hall, who has a few more votes, is given free license to ply his infernal trade.

Tammany is not a political party. It is simply a gang of politicians banded together to rob the city of New-York. Have you ever heard of a reform achieved by Tammany Hall? Did you ever know an honest Democratic citizen who wanted to effect a reform who did not incur Tammany’s enmity? All that Tammany’s men think of is to make Tammany strong, and they regard the city as a large soup bowl that is to be kept fat and full for “the boys.”

I should think that any humane and honest person would rather be convicted of one robbery and one murder than become a cold and deliberate confederate in wholesale robbery and wholesale murder by voting a Tammany ticket. Certainly, if anything is proven up to the hilt, Tammany’s financial history and health statistics of 1901 prove that Tammany’s especial and remorseless trade is wholesale pillage and wholesale destruction of health and life.

This civil service law is the biggest fraud of the age. It is the curse of the nation. There can’t be no real patriotism while it lasts. How are you goin’ to interest our young men in their country if you have no offices to give them when they work for their party? Just look at things in this city today. There are ten thousand good offices, but we can’t get at more than a few hundred of them. How are we goin’ to provide for the thousands of men who worked for the Tammany ticket? …

First, this great and glorious country was built up by political parties; second, parties can’t hold together if their workers don’t get the offices when they win; third, if the parties go to pieces,
the government they built up must go to pieces, too; fourth, then there’ll be h—— to pay.

Handout A: Background Essay: The Rise of Reform Politics