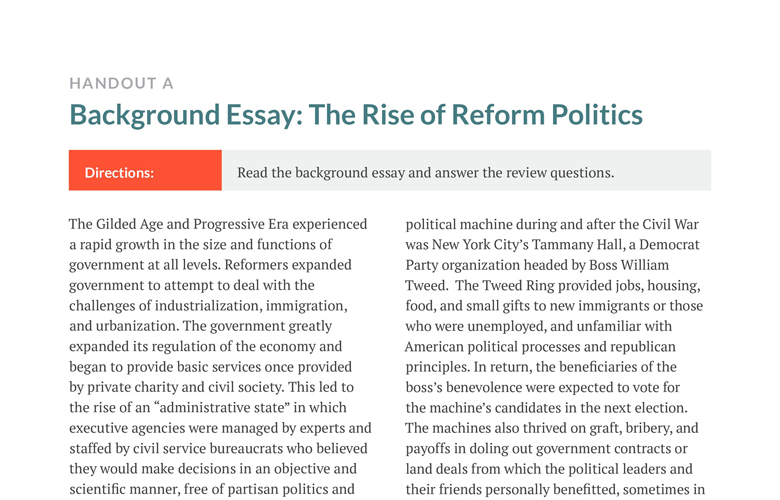 Directions: Read the background essay and answer the review questions.

The Gilded Age and Progressive Era experienced a rapid growth in the size and functions of government at all levels. Reformers expanded government to attempt to deal with the challenges of industrialization, immigration, and urbanization. The government greatly expanded its regulation of the economy and began to provide basic services once provided by private charity and civil society. This led to the rise of an “administrative state” in which executive agencies were managed by experts and staffed by civil service bureaucrats who believed they would make decisions in an objective and scientific manner, free of partisan politics and corruption. Over the next century, Americans would debate if the expanded government violated the constitutional principle of limited government or whether the government needed to meet the real needs of the people in a changing economy and society.

The rise of the industrial factory system in cities attracted millions of immigrants and migrants from the American countryside. Northern and Midwestern cities such as Boston, New York, Philadelphia, and Chicago grew quickly and strained the infrastructure system and resources. Self-interested politicians and their supporters expanded their political and financial power by trading basic services to the immigrants in exchange for votes. These corrupt urban politicians developed organizations commonly known as political machines controlled by a “boss.” The most infamous political machine during and after the Civil War was New York City’s Tammany Hall, a Democrat Party organization headed by Boss William Tweed. The Tweed Ring provided jobs, housing, food, and small gifts to new immigrants or those who were unemployed, and unfamiliar with American political processes and republican principles. In return, the beneficiaries of the boss’s benevolence were expected to vote for the machine’s candidates in the next election. The machines also thrived on graft, bribery, and payoffs in doling out government contracts or land deals from which the political leaders and their friends personally benefitted, sometimes in the millions of dollars.

Over time, some Americans began to organize against the monopolistic machines which dominated the cities and called for reform of city government. They also advocated legal action against the bosses and their supporters. Often, middle and upper class citizens, called “mugwumps,” called for the reform of municipal government and legal action against the bosses and their supporters and agents. In 1871, Boss Tweed was arrested and eventually convicted of over 200 counts of various forms of corruption, spending most of the rest of his life in jail. Reformers also successfully organized to have their own pro-reform candidates elected to city office and pushed to modernize the structure of city governments in a bid to break public support for the machine. By 1900, machines had lost most of their power.

As a result of these reforms, city governments would experience a number of changes. In an effort to promote efficiency, many cities began to experiment with non-partisan elections of city managers and administrators. Under this type of system, government was structured much like a business. City administrators would report to a board of directors including a mayor and city council. This system was seen as a way of fighting the political machines as well as promoting efficiency to solve problems caused by natural disasters, economic hardships, and many other problems that could arise.

Around the turn of the century, educated, middle-class reformers called “progressives” sought a more efficient society where experts and civil service workers ran government through agencies rather than leaving the tasks of government to corrupt legislatures or machine politicians. Many progressives worked on the state level for political reforms. States passed a variety of regulations on railroads, utilities, and other businesses. Moreover, dozens of states passed reforms such as regulation of child and women’s labor, workplace health and safety regulations, and unemployment insurance. Several states successfully adopted these tools of direct democracy around the turn of the nineteenth century and still use them today. Progressives developed these new ways for Americans to participate in their government and make their voices heard. Initiatives allowed voters to propose new laws, the referendum allowed voters to vote directly on proposed laws, recalls permitted voters to remove elected state officials, party primaries granted voters a voice in selecting a party’s candidate for office, and secret ballots provided for a confidential vote. These devices gave people a more democratic voice in government and fought corruption because voters could bypass corrupt state legislatures. An example of a notable state reformer was Robert LaFollette of Wisconsin who was a progressive reformer who won an inheritance tax, ended shipping rebates by railroads, helped to create a railroad commission to investigate railroad practices, and supported a variety of democratic voting reforms.

Political patronage, or the distribution of political offices and favors to one’s supporters upon election, became the subject of intense disagreement in Congress. Reformers led by Senator James G. Blaine championed civil service reform at the national level aimed at reducing the number of political appointees in the federal government and implementing a civil service exam to hire people of talent and merit rather than party loyalty. The fight for civil service reform led to the Pendleton Act of 1883, which made some federal jobs subject to competitive hiring.

Other progressive reforms supported direct democracy. In 1913, the states ratified the Seventeenth Amendment to the U.S. Constitution, which provided for direct, popular election of U.S. senators. Previously, senators were elected by state legislatures according to the Constitution and the principle of federalism. Critics of this system argued that the process was undemocratic and made their representatives wholly unaccountable to the public. After ratification of the Seventeenth Amendment, all qualified voters possessed the power to cast a vote for the senatorial candidate of their choice.

In 1920, the women’s suffrage movement won a decades-long struggle for women’s right to vote. From the 1870s to the 1890s, suffragists pursued a state-based strategy to secure voting rights on the state level, because states determined a citizen’s eligibility to vote. This strategy met with great success, especially in the West. However, by the 1910s, suffrage groups increasingly turned their attention to a constitutional amendment. Organizations like the National American Woman Suffrage Association (NAWSA), led by veteran activist Alice Paul, used confrontational protests, picketing, and hunger-strikes to pressure national officials to support the women’s suffrage amendment. Women also went to work in factories during World War I to aid the war effort. In 1920, the states ratified the Nineteenth Amendment, which secured women’s right to vote.

Although some earlier federal reforms regulated business, such as the Interstate Commerce Act (1887) and the Sherman Antitrust Act (1890), progressive reforms were successfully implemented primarily from 1900 to 1916. During the administration of President Theodore Roosevelt, Congress and the president expanded the regulation of business. The Elkins Act (1902) banned railroad rebates, and the Hepburn Act (1906) gave the Interstate Commerce Commission (ICC) authority to set maximum rates for railroads. Congress also created a Bureau of Corporations to investigate violations of interstate commerce regulations. In 1906, Upton Sinclair’s novel, The Jungle, shocked the public with its revelations about the unhealthy conditions in meat-packing plants. Congress responded by passing the Meat Inspection Act and the Pure Food and Drug Act that year in order to regulate the food industry for public health and created the Food and Drug Administration. Roosevelt also signed bills setting aside millions of acres of public land for national parks. The size and power of the national government expanded significantly under Roosevelt’s administration particularly in the new administrative agencies in the executive branch.

Although President William Howard Taft (1909-1913) oversaw an expansion of ICC railroad regulatory authority and prosecuted more trusts than the previous administration, he was generally a constitutional conservative who wanted to preserve limited government and separation of powers. President Woodrow Wilson, on the other hand, was a progressive who believed in strong executive government rather than the legislative processes of Congress. He believed in an activist regulatory government he thought would control businesses to restore individual freedoms. Wilson signed into law the Federal Reserve System, creating a national banking system. He also signed the Clayton Antitrust Act (1914), which outlawed monopolistic practices, and created the Federal Trade Commission, another agency dedicated to regulating big business. Congress also passed laws lowering the tariff, granting aid to farmers, and regulating child labor. Wilson and Roosevelt had different ideological impulses for their progressive reforms, but both helped to create a national government that was much larger and controlled more aspects of the American economy and society. The Sixteenth Amendment, ratified in 1913, amended the Constitution to allow a personal income tax and funded the expanding federal state.

The apex of the progressive movement occurred after American intervention in World War I from 1917 to 1918. The federal government created several agencies that would mobilize the country for total war, in which all the resources of the nation were dedicated to the war effort. The War Industries Board controlled factory production during the war, the War Labor Board regulated workers and working conditions, the Food Administration and Fuel Administration rationed those items for the war effort, and the Committee on Public Information managed propaganda and wartime information. Hundreds of thousands of workers and middle class professionals staffed the new agencies to rationalize and scientifically manage the American economy.

American politics had witnessed great changes from 1870 to 1920. When the period began, the federal government only had 50,000 workers, and most of those were U.S. Post Office workers. Moreover, Americans generally governed themselves at the state and local level with the federal government exercising a few constitutional powers. By the end of the era, the federal government had ten times the number of workers and had much greater regulatory authority. The progressives believed that the American principles of limited government and separation of powers were outdated concepts that were insufficient to address the problems of a modern industrial and urban society. Therefore, the progressives laid the foundation of a much larger and stronger national government for the twentieth century.