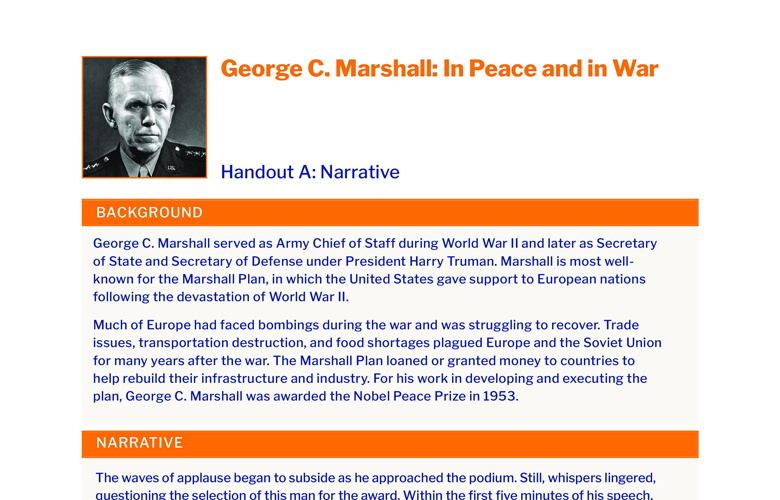 George C. Marshall served as Army Chief of Staff during World War II and later as Secretary of State and Secretary of Defense under President Harry Truman. Marshall is most wellknown for the Marshall Plan, in which the United States gave support to European nations following the devastation of World War II.

Much of Europe had faced bombings during the war and was struggling to recover. Trade issues, transportation destruction, and food shortages plagued Europe and the Soviet Union for many years after the war. The Marshall Plan loaned or granted money to countries to help rebuild their infrastructure and industry. For his work in developing and executing the plan, George C. Marshall was awarded the Nobel Peace Prize in 1953.

The waves of applause began to subside as he approached the podium. Still, whispers lingered, questioning the selection of this man for the award. Within the first five minutes of his speech, General George Catlett Marshall answered his critics. He began, “There has been considerable comment over the awarding of the Nobel Peace Prize to a soldier. I am afraid this does not seem as remarkable to me as it quite evidently appears to others . . . The cost of war in human lives is constantly spread before me, written neatly in many ledgers whose columns are gravestones.”

These were not the words of an arrogant, battle-hungry warrior. He stood before them that evening as an intelligent and compassionate soldier-statesman to accept the Nobel Peace Prize of 1953. This was the man who had helped lead the Allied forces to victory in World War II. This was the author of the Marshall Plan, so critical to the economic rebuilding of Europe in the war’s aftermath. His words were evidence of the principles by which he lived—initiative, perseverance, courage, and moderation. Marshall was a man of the highest integrity.

The general’s concern for future generations resonated in the hall. The key to a lasting peace, he asserted, was education. “Because wisdom in action in our Western democracies rests squarely upon public understanding, I have long believed that our schools have a key role to play. Peace could, I believe, be advanced through careful study of all the factors which have gone into the various incidents now historical that have marked the breakdown of peace in the past.”

The retired general understood the importance of education in his own training. He began his service in the United States Army in 1901. There, he earned high praise for his leadership abilities. He also served as an instructor and staff officer for many years. Although his promotions came slowly, Marshall persevered. He worked under General Pershing during World War I and played an integral role in developing military strategy.

In 1927, two events significantly affected Marshall’s life: the sudden death of his wife and his assignment as head of the Infantry School at Fort Benning, Georgia. He plunged into depression, but the task of training soldiers gave him a focus. Under his guidance and initiative, a training program at Fort Benning was restructured. During his five years there, over two hundred future generals were trained. The experience reinforced his strong commitment to education.

From 1932 to 1936, Marshall had more opportunities to develop his leadership skills by working with the Civilian Conservation Corps and the National Guard. In September 1939, President Franklin Roosevelt selected him to serve as Chief of Staff of the War Plans Division around the same time that Germany invaded Poland to begin World War II.

Marshall spent the majority of his career responding to the consequences of the invasion. During his acceptance speech for the Nobel Peace Prize, he reflected that following the German conquest of Europe, the United States had “acquired, I think, a feeling and a concern for the problems of other peoples. There is a deep urge to help the oppressed and to give aid to those upon whom great and sudden hardship has fallen.”

Marshall recognized the importance of the United States in the international community. As the head of the army, Marshall went to Congress and the president, in the face of considerable opposition, to make a case for American support of the war in Europe. He urged them to realize the effect war would have on the United States. His perseverance again led to success, and he was authorized to begin to prepare for a possible entrance into the war.

Marshall also recognized his personal responsibility to the United States. Following America’s entry into World War II in 1941, President Roosevelt began to rely on him in both the military and political arenas. By 1945, he was indispensable. When faced with the difficult choice of leading the D-Day invasion of Normandy or staying in Washington, the general placed duty before self-interest. The president said he “could not sleep at ease,” with Marshall on the front line, but Marshall stayed. Later, such personal sacrifices and public contributions earned him several honors. He was given the title General of the Army and Time magazine named him “Man of the Year.”

Following his military service, Marshall became Secretary of State in the Truman administration. Post-war Europe presented new challenges. In 1947, he tackled the task of defining America’s new role as a world power. He wanted to help the “. . . millions who live under subnormal conditions and who have now come to a realization that they may aspire to a fair share of the God-given rights of human beings.” He believed that if the United States acted “with wisdom and magnanimity,” it could “guide these yearnings of the poor to a richer and better life through democracy.

Marshall saw industry as critical to European recovery. In a speech to the graduating class of Harvard University, he shared what became known as the Marshall Plan. Although it was clear that Europe needed aid from the United States, he stressed a moderate approach. “The remedy lies in breaking the vicious circle and restoring confidence of the European people in the economic future of their own countries and of Europe as a whole,” Marshall said. “This is the business of Europeans.” Over the next two years, the United States helped stabilize the economies of western European nations and established the North Atlantic Treaty Organization (NATO) for their security.

George C. Marshall’s dedication and courage had earned him the respect of world leaders like English Prime Minister Winston Churchill and President Franklin D. Roosevelt. His guiding principles and personal integrity helped lead the United States through perilous times. Through his initiatives, Marshall placed other nations on the path to prosperity. America, he said, is “young in world history, but these ideals of ours we can offer to the world with the certainty that they have the power to inspire and to impel action.” Marshall concluded his Nobel acceptance speech by stating, “I have done my best, and I hope I have sown some seeds which may bring forth good fruit.” By practicing integrity in his personal and professional life, Marshall ensured that many positive results would emerge because of his actions.