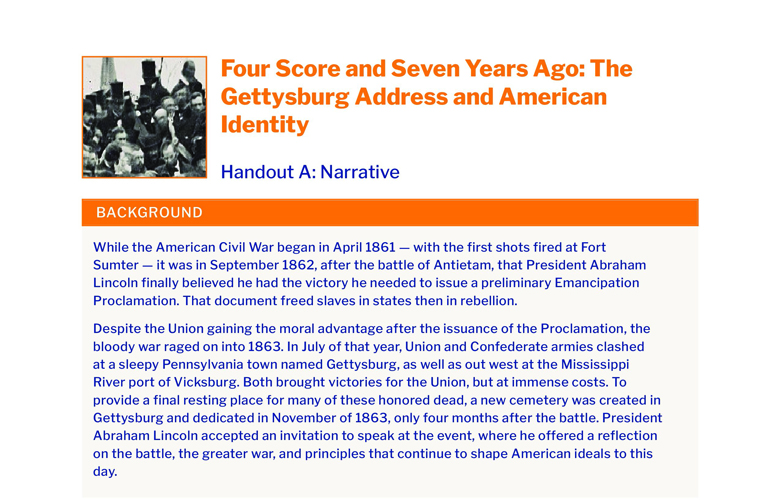 While the American Civil War began in April 1861 — with the first shots fired at Fort Sumter — it was in September 1862, after the battle of Antietam, that President Abraham Lincoln finally believed he had the victory he needed to issue a preliminary Emancipation Proclamation. That document freed slaves in states then in rebellion.

Despite the Union gaining the moral advantage after the issuance of the Proclamation, the bloody war raged on into 1863. In July of that year, Union and Confederate armies clashed at a sleepy Pennsylvania town named Gettysburg, as well as out west at the Mississippi River port of Vicksburg. Both brought victories for the Union, but at immense costs. To provide a final resting place for many of these honored dead, a new cemetery was created in Gettysburg and dedicated in November of 1863, only four months after the battle. President Abraham Lincoln accepted an invitation to speak at the event, where he offered a reflection on the battle, the greater war, and principles that continue to shape American ideals to this day.

In the late autumn of 1863, President Lincoln faced many public and personal crises. The Civil War raged on, producing massive amounts of deaths. At the Battle of Gettysburg alone there were more than 51,000 American casualties between the North and South. Those deaths weighed heavily on Lincoln, as did the burdens of his office. In addition, his son, Tad, was ill. Despite these concerns, Lincoln agreed to deliver a speech in Gettysburg to commemorate the war dead that would be interred there.

When growing up, Lincoln had scant formal schooling, but he made up for this by voraciously reading anything he could get his hands on. In fact, his father scolded him several times for reading instead of completing his chores. He devoured classic novels and anthologies of ancient and American speeches. He read Parson Weems’ biographies of George Washington and other Founders. He studied volumes of grammar and elocution to sharpen his thinking and writing. Poets John Milton, Robert Burns, and Alexander Pope, the plays of Shakespeare, and above all, the King James Bible, shaped his love of words and language. These works stimulated his reflections on the human condition and moral principles.

Lincoln’s appreciation of language was displayed in several of the activities he participated in as a young man. He enjoyed composing doggerel for friends, engaged in storytelling, and joined a debating society. The future president chose the law as a career, a field that helped sharpen his ability to think logically and develop a clear line of reasoning. The courtroom also afforded Lincoln an arena to craft his words and arguments to persuade juries and match wits with competing attorneys. Over time, Lincoln developed a plain style of delivery that was characterized by a sharp logical edge, an economy of words, and a beautiful rhythm and cadence that blended poetry and mathematical precision. His identity as a writer and speaker began to grow.

Lincoln’s law partner, William Herndon, noted that Lincoln could often be found reading in their law office, stretched out on the leather sofa with his long legs hanging over the edge. Lincoln would mumble to himself, turning a phrase over and over in his head. He would jot down his musings onto scraps of paper and put them in his hat to develop at another time.

Lincoln built his political career on several notable speeches, but he gained his greatest renown in the Lincoln-Douglas debates. Lincoln ran against Stephen Douglas for an Illinois Senate seat. They debated each other seven times across the state, with thousands of observers at each three-hour marathon. Douglas won the seat, but Lincoln’s brilliant use of words brought him to the attention of a larger national audience and helped catapult him to the presidency a few years later.

As president, Lincoln delivered many important, eloquent speeches during the Civil War. He composed his statements with the same care and desire to communicate reasonably and poetically as he had throughout his life and public career. Although many were important political speeches, none were more beautiful and representative of Lincoln’s identity as a wordsmith and writer as the Gettysburg Address.

On November 18, 1863, Lincoln rode a special train from Washington up to Gettysburg with some ideas and jottings in mind to begin his composition. He continued writing on the train, rolling his ideas around in his mind until he arrived in the evening. He finalized his remarks that evening and the next morning. On Nov. 19, Lincoln delivered the 272-word Gettysburg Address in a mere two minutes.

Before Lincoln spoke, Edward Everett delivered a lengthy oration on the meaning of America. Everett would later congratulate the president in a letter, saying, “I should be glad…that I came as near to the central idea of the occasion, in two hours, as you did in two minutes.”

Evoking the language of the King James Bible, Lincoln began his speech with the immortal words, “Four score and seven years ago our fathers brought forth on this continent, a new nation, conceived in liberty, and dedicated to the proposition that all men are created equal.”

Lincoln took his audience back to 1776 and the principles of the Declaration of Independence. He purposefully altered the Declaration’s “self-evident truths” to that of a “proposition,” as the Civil War was a battle over the now-contested idea that blacks were human beings with natural rights. The Founders’ axiom that “all men are created equal” had become debatable. Lincoln believed equality was a universal principle, but he acknowledged that men were fighting and dying over its veracity, saying, “now we are engaged in a great civil war, testing whether that nation, or any nation so conceived and so dedicated, can long endure.”

In the next paragraph, Lincoln brought listeners to the present—an awful, bloody present in which thousands of Americans perished at this one battlefield over three horrific days. He honored their sacrifice for the country and its principles, stating, “We are met on a great battle- field of that war. We have come to dedicate a portion of that field, as a final resting place for those who here gave their lives that that nation might live. It is altogether fitting and proper that we should do this.”

Lincoln repeated the word “dedicate” again and again—a nation dedicated to the principle of equality, a president dedicating a battlefield, a people dedicated to seeing the bloody civil war through to its end to complete its work towards equality. He also included poetic triplets in the concluding paragraph, stating, “We cannot dedicate – we cannot consecrate – we cannot hallow,” as well as, “government of the people, by the people, and for the people.” This rhetorical device gave the speech its cadence and rhythm.

The speech ended on a note of humility, as the president noted that the brave actions of the dead soldiers meant more than mere words. Lincoln took his reader to the future, warning that the fighting and sacrifices needed to continue in order for the nation to be reborn and fulfill the original promise of equality:

But, in a larger sense, we cannot dedicate—we cannot consecrate—we cannot hallow— this ground. The brave men, living and dead, who struggled here, have consecrated it, far above our poor power to add or detract. The world will little note, nor long remember what we say here, but it can never forget what they did here. It is for us the living, rather, to be dedicated here to the unfinished work which they who fought here have thus far so nobly advanced. It is rather for us to be here dedicated to the great task remaining before us—that from these honored dead we take increased devotion to that cause for which they gave the last full measure of devotion — that we here highly resolve that these dead shall not have died in vain—that this nation, under God, shall have a new birth of freedom—and that government of the people, by the people, for the people, shall not perish from the earth.

With that, Abraham Lincoln reminded his audience that America was created around the ideals of liberty, self-government, and equality of all humans. Lincoln’s identity revolved around his passion for using words to help bring about a better society. His address on that November day demonstrated his commitment to the goal of achieving justice for all Americans.