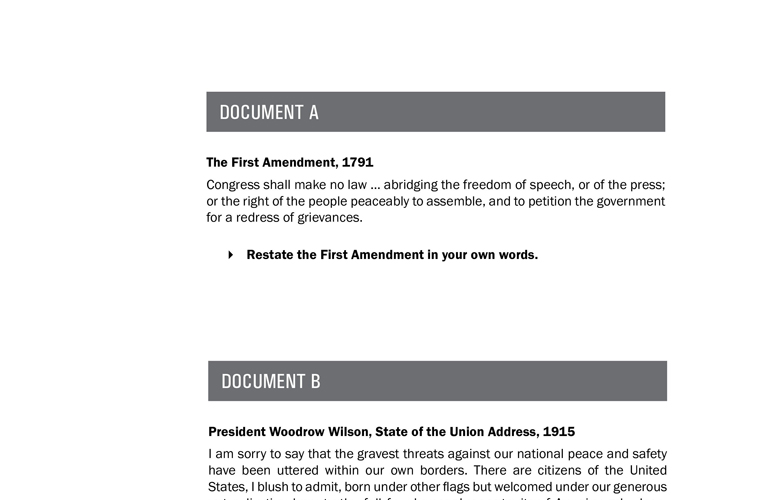 Congress shall make no law … abridging the freedom of speech, or of the press; or the right of the people peaceably to assemble, and to petition the government for a redress of grievances.

I am sorry to say that the gravest threats against our national peace and safety have been uttered within our own borders. There are citizens of the United States, I blush to admit, born under other flags but welcomed under our generous naturalization laws to the full freedom and opportunity of America, who have poured the poison of disloyalty into the very arteries of our national life passion. …[T]he ugly and incredible thing has actually come about and we are without adequate federal laws to deal with it.

I urge [Congress] to enact such laws at the earliest possible moment and feel that in doing so I am urging you to do nothing less than save the honor and self-respect of the nation. Such creatures of passion, disloyalty, and anarchy must be crushed out.…

There are some men among us, and many resident abroad who, though born and bred in the United States and calling themselves Americans, have so forgotten themselves and their honor as citizens as to put their passionate sympathy with one or the other side in the great European conflict above their regard for the peace and dignity of the United States. They also preach and practice disloyalty.…

[Speech is protected by the First Amendment if the speaker] stops short of urging upon others that it is their duty or their interest to resist the law…[D]irect incitement to violent resistance is to disregard the tolerance of all methods of political agitation which in normal times is a safeguard of free government. 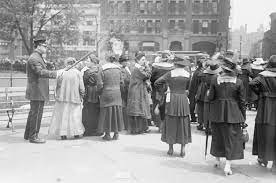 Original caption: 6/16/1917—New York, NY—5,000 WOMEN IN CITY HALL REGISTRY RIOT… Photo shows policemen clearing City Hall Park after 5,000 women from the East Side and Harlem had gathered to petition the Mayor against the draft. 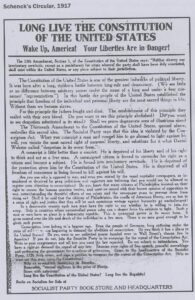 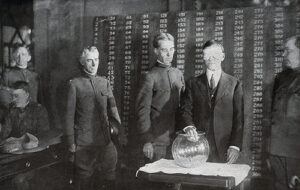 The document in question upon its first printed side recited the first section of the Thirteenth Amendment, said that the idea embodied in it was violated by the conscription act and that a conscript is little better than a convict.

Of course the document would not have been sent unless it had been intended to have some effect, and we do not see what effect it could be expected to have upon persons subject to the draft except to influence them to obstruct the carrying of it out.

But it is said, suppose that that was the tendency of this circular, it is protected by the First Amendment to the Constitution….

We admit that in many places and in ordinary times the defendants in saying all that was said in the circular would have been within their constitutional rights. But the character of every act depends upon the circumstances in which it is done. The most stringent protection of free speech would not protect a man in falsely shouting fire in a theatre and causing a panic. It does not even protect a man from an injunction against uttering words that may have all the effect of force.

The question in every case is whether the words used are used in such circumstances and are of such a nature as to create a clear and present danger that they will bring about the substantive evils that Congress has a right to prevent. It is a question of proximity and degree. When a nation is at war many things that might be said in time of peace are such a hindrance to its effort that their utterance will not be endured so long as men fight and that no Court could regard them as protected by any constitutional right.…

Note: The three figures in the lower left are labeled, “Honest Opinion,” “Free Speech,” and “Free Press.” The snake is labeled “Sedition Bills.” 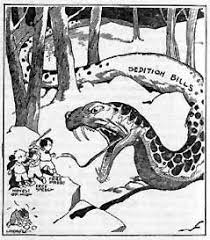 DIRECTIONS: Answer the Key Question in a well-organized essay that incorporates your interpretations of Documents A-I, as well as your own knowledge of history.