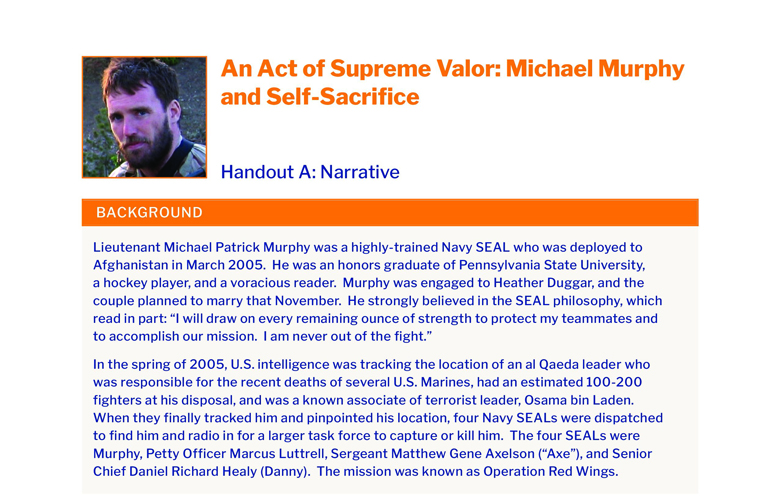 Lieutenant Michael Patrick Murphy was a highly-trained Navy SEAL who was deployed to Afghanistan in March 2005. He was an honors graduate of Pennsylvania State University, a hockey player, and a voracious reader. Murphy was engaged to Heather Duggar, and the couple planned to marry that November. He strongly believed in the SEAL philosophy, which read in part: “I will draw on every remaining ounce of strength to protect my teammates and to accomplish our mission. I am never out of the fight.”

In the spring of 2005, U.S. intelligence was tracking the location of an al Qaeda leader who was responsible for the recent deaths of several U.S. Marines, had an estimated 100-200 fighters at his disposal, and was a known associate of terrorist leader, Osama bin Laden. When they finally tracked him and pinpointed his location, four Navy SEALs were dispatched to find him and radio in for a larger task force to capture or kill him. The four SEALs were Murphy, Petty Officer Marcus Luttrell, Sergeant Matthew Gene Axelson (“Axe”), and Senior Chief Daniel Richard Healy (Danny). The mission was known as Operation Red Wings.

In the early morning of June 27, 2005, Lieutenant Michael Patrick Murphy received word that an al Qaeda leader had been found. “[Operation] Redwing is a go!” his commander told another member of the team, Marcus Luttrell. “This is it, Marcus. We’re going. Go get the guys ready.” The four-man team gathered their M4 rifles with eight thirty-bullet magazines, grenades, four days’ supply of food and water, and various communications and camera equipment weighing almost fifty pounds in their rucksacks. They climbed aboard the special operations helicopter and lifted off into the darkness of the night sky toward their destination. Any apprehensions and fears the four men had were tempered by years of training and their experience on dozens of missions as Navy SEALs, among the most professional and dangerous soldiers in the world.

The helicopter pilot made several false insertions to confuse the enemy and finally dropped off Murphy and his team as they roped twenty feet to the ground at the landing zone. They were perfectly still and silent for fifteen minutes before they began an arduous mountainous climb in the inky blackness and driving rain while trying to remain completely out of sight. The grueling four-mile journey took seven hours, and the SEALs became bruised because they constantly fell in the darkness over uneven, rocky terrain. Arriving just before dawn, they did not like their assigned position as it did not afford any concealment. They scouted several locations until finding a suitable one.

As they were settling in to watch the village, a local carrying an ax happened upon their position, followed by another man, a teenage boy, and their herd of goats. Murphy and the other SEALs emerged from cover with their rifles drawn. They debated shooting the strangers to preserve the mission and tried to call headquarters for guidance, but could not establish communication. Murphy assessed their options, asked his men for their judgments, and polled his men. They voted to release them and then move out quickly because they knew the goat herders would alert the Taliban.

The SEALs found a suitable defensive position with concealment but were quickly discovered by around 200 enemy fighters who knew the local terrain and nimbly moved to attack. There was a heavy exchange of lethal gunfire, but for every Taliban fighter that fell, a new one took his place. The SEALs were surrounded and decided to go over a cliff to escape. They went diving over the mountainside in a blur of painful tumbling for an estimated 200 yards until crashing to a stop. Luttrell remembered seeing Murphy’s bright red New York City firefighter patch honoring the victims of September 11 as they fell. They lost their food, radios, medical kits, and other equipment in the fall, and they were battered and bruised but clung tenaciously to their weapons.

Murphy was shot in the stomach during the fall and was bleeding profusely from his wound,
but the first question he unselfishly asked Luttrell was, “You good?” The enemy descended footpaths and again surrounded the Americans, who were assailed by a hail of gunfire and exploding rocket-propelled grenades (RPGs). Luttrell writes, “Mikey was ignoring his wound and fighting like a SEAL officer should, uncompromising, steady, hard-eyed, and professional.” After Murphy and Luttrell rescued Danny, who was the last to fall and had been shot, the four men leaped again, this time dropping 35 feet and landing in a streambed of rocks and shrubs. They spread out into firing positions and were given no time to rest as the assault continued from the advantage of higher ground.

Danny was shot several more times, including in the throat, but continued to jam clips into his rifle and fire at the enemy. Murphy wanted to get his men to a village a mile and a half away and ordered his men down yet another precipice. By this time, they had been fighting for about forty minutes, but it felt like a lifetime. When the four bloodied men landed, Danny was shot in the throat for a second time. Murphy looked at Luttrell as they contemplated their deaths and said, “Man, this really sucks.” They prepared to move out when Axe was shot in the chest and continued the fight, but Danny was shot in the head and finally succumbed to his wounds. They plunged down another cliff as Murphy struggled to go back for Danny’s body and very reluctantly left without it.

As they recovered their senses after their fall, Murphy turned to Luttrell to bolster his courage. “Remember, bro, we’re never out of it,” he said. The fierce firefight continued, and although there were a lot fewer enemy fighters, the SEALs were still hopelessly outnumbered and pinned down. Axe was shot in the head but somehow managed to fire his rifle. Murphy was shot through the chest.

Nevertheless, he took out a mobile phone that they only used as a last resort because it revealed their location and had to be used in the open. Murphy walked through heavy gunfire to sit on a rock and contacted headquarters. He calmly dialed the number and yelled to be heard. “My men are taking fire . . . we’re getting picked apart. My guys are dying out here . . . we need help.” Just then, he was shot in the back and blood spurted from his chest. He slumped over for a few moments before speaking into the phone, “Roger that, sir. Thank you.”

Lieutenant Murphy put the phone down, picked up his rifle, and returned fire. He stopped briefly to scream at Luttrell, “Help me, Marcus! Please help me!” Desperate to help his best friend, Luttrell could not reach him. He watched helplessly as four Taliban fighters approached Murphy and fired several rounds into him and killed him. Murphy never saw eight fellow SEALs selflessly approach the site of the battle to save their dying brothers and perish themselves as their helicopter was shot down by an RPG.

Luttrell was the only survivor of the four-man team that tenaciously fought to defend the lives of their fellow SEALs that day and sacrifice themselves that the others might live. Luttrell later wrote about Murphy’s selfless action to call their base for help under fire and sacrifice himself doing so, stating, “Was there ever a greater SEAL team commander, an officer who fought to the last and, as perhaps his dying move, risked everything to save his remaining men? . . . . the final, utterly heroic act. Not a gesture. An act of supreme valor. Lieutenant Mikey was a wonderful person and a very, very great SEAL officer. If they build a memorial to him as high as the Empire State Building, it won’t ever be high enough for me.”