John Jay epitomized the selfless leader of the American Revolution. Born to a prominent New York family, John Jay gained notoriety as a lawyer in his home state. He favored a moderate approach to Britain but joined his fellow Patriots once the Declaration of Independence was signed. Jay’s fellow Founders regarded him so highly that they elected him President of the Assembly, the highest office in the land under the Articles of Confederation.

Ten years later, President George Washington appointed him the first Chief Justice of the Supreme Court. He reluctantly resigned from the Supreme Court because he had been elected Governor of New York—an office he neither desired nor sought. As Governor, Jay fought for the emancipation of slaves by organizing and mobilizing abolitionist groups and signing an emancipation bill.

Jay left his mark on the new nation despite being somewhat marginalized by history. Jay wrote five essays in The Federalist Papers, but James Madison and Alexander Hamilton receive recognition for the now classic commentary. He worked for the Treaty of Paris, but history has given Benjamin Franklin and John Adams most of the credit. He negotiated a trade treaty with Great Britain that helped avoid a war, but history emphasizes his failures. He led the fight against slavery in New York, but his efforts are often overlooked on the national scale. He touched several of the foundations of our nation, while never really capturing attention in one area. His contributions were invaluable to a struggling infant nation and appreciated by his fellow Founding Fathers.

Reconvene the class and conduct a large group discussion to answer the following questions: Why do students believe either document provides the stronger support? Or do both documents support it equally, but in different ways? Finally, how does each document support Jay’s argument?

Students who believe Article 1, Section 9 supports Jay’s argument may say it does so because the Constitution is the law of the land. To use the Constitution to support abolition is the strongest possible tactic. Other students may say, however, that since the Constitution does not use the word “slaves,” nor does it say anything specific about new states, that it is not a strong support for the position that Congress can outlaw slavery in the new states. Students who believe the Declaration of Independence is the stronger support for Jay’s argument may say that it is based on the concept of natural (or inalienable) rights. Slavery, they may say, is obviously in opposition to the concept of natural rights. Others may say, however, that at the time, slaves were considered property and not people. Therefore, they did not in fact have natural rights. Furthermore, as property, they were protected by the Constitution. The Constitutional support is a rational argument based on the law, while the Declaration of Independence support is a philosophical argument based on natural law.

John Jay wrote a letter to R. Lushington in 1785 in which he said, “It is much to be wished that slavery may be abolished. The honour of the States, as well as justice and humanity, in my opinion, loudly call upon them to emancipate these unhappy people. To contend for our own liberty, and to deny that blessing to others, involves an inconsistency not to be excused.” Ask students to write a two or three paragraph response to this quote.

Handout C: In His Own Words: John Jay on Slavery 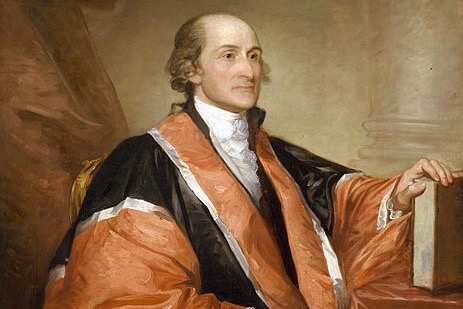