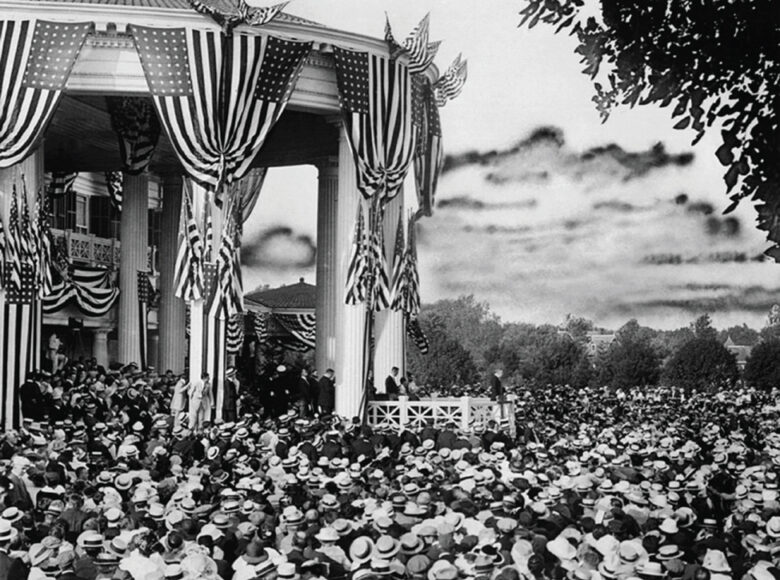 In 1913, President Woodrow Wilson took office determined to regulate an economy increasingly dominated by large industrial and financial corporations that he and many other Americans believed were strangling competition and harming the interests of ordinary workers and consumers. All self-described “progressives” shared that desire, including former President Theodore Roosevelt, who had run against Wilson in the 1912 election.

In his Inaugural Address, Wilson vowed to eliminate “a tariff which cuts us off from our proper part in the commerce of the world . . . and makes the Government a facile instrument in the hand of private interests.” He also promised to reform an “industrial system which. . . holds capital in leading strings, restricts the liberties and limits the opportunities of labor, and exploits without renewing or conserving the natural resources of the country”.

By the time he left office eight years later, Wilson and Congress which his party controlled from 1913 to 1919 had enacted several pathbreaking pieces of legislation that were intended to accomplish those ends. But anyone who hoped the president would lead a restoration of a fully competitive marketplace which he called The New Freedom was disappointed. Such big businesses as U.S. Steel and Ford Motor Company did have to abide by certain new rules, enforced by new bureaucratic agencies. But they continued to be the most powerful forces in both the economy and the politics of what had become the most prosperous capitalist society on earth. Today, such firms as Amazon and Exxon Mobil retain that status.

With several pathbreaking measures enacted during his first term, Wilson did try to place serious restrictions on corporate power. In 1913, the president signed the first major act to decrease tariffs since the Civil War. By cutting duties on imported goods by approximately 10 percent, the Underwood-Simmons bill reduced some of the advantage industrial firms had long enjoyed that kept prices higher than consumers would otherwise have paid. Most Democrats, especially in rural areas in the South and West, favored slashing the tariff, whereas most Republicans opposed it. To offset some of the lost revenue, the legislation included a relatively small, graduated income tax, which only the wealthiest Americans had to pay. The progressives wanted to use an income tax to address their concern about income inequality. In 1913, the requisite number of states ratified the Sixteenth Amendment, making an income tax constitutional to address a specific constitutional prohibition on it and the decision in Pollock v. Farmers’ Loan & Trust (1895) declaring it unconstitutional. The 1913 Revenue Act taxed incomes over $20,000 at 1 percent and incomes over $500,000 at 7 percent. During the course of the twentieth century, rates increased significantly and more taxpayers of lower incomes were added to those who had to pay.

Passed later in 1913, the Federal Reserve Act had sweeping significance. For decades, large private banks had operated with little or no government supervision; no national authority existed that could adjust the supply of money and the interest rate as needed to stabilize the economy. The Federal Reserve Act created a system whose directors had the power to balance the interests of big and small financial institutions alike, as well as the exclusive right to issue money.

The Clayton Act of 1914 contained an explicit set of provisions to stop the creation of trusts, which were combinations of firms that had the potential to restrain trade and stifle competition. Unlike the Sherman Act, an earlier antitrust bill passed in 1890 that had considered labor unions monopolies, the Clayton Act specifically exempted unions, many of which had backed Wilson’s campaign for president. The Federal Trade Commission was an executive agency Congress also created in 1913 that had the power to enforce the Clayton Act and to publicize violations of it that damaged consumers.

The Wilson administration and its congressional allies also enacted reforms to aid workers, who were fast becoming the majority of the population as the percentage of farmers declined. Congress passed a law to ban child labor, institute an eight-hour day for railroad workers (whose strikes had the power to cripple the economy), and establish a new Department of Labor as part of the cabinet. The department’s first secretary, William B. Wilson, was a former top official of the United Mine Workers, one of the largest unions in the country.

Together, these acts signed by Wilson constituted the greatest wave of legislation designed to reform the economy in U.S. history to that point. Only Franklin D. Roosevelt’s New Deal two decades later surpassed it (and was, in fact, influenced by Wilsonian progressivism).

But achieving the goal of regulating corporations in the public interest meant giving up the aim of humbling big business that Wilson had called for during the 1912 campaign and that many of his followers had expected him to carry out. When Republicans returned to power in the White House and Congress again in the 1920s, they reversed the tariff cuts the Democratic Congress had enacted.

By the time Wilson left the White House, his economic policies more closely resembled those his fierce rival Theodore Roosevelt had promoted in 1912 under the name of New Nationalism than they did his own New Freedom. “The enslavement of the people by the great corporations . . . can only be held in check through the expansion of governmental power,” Roosevelt had declared. He insisted that the era of small-scale, truly competitive capitalism was over; big business could make better use of new technologies and deliver goods and service to the public more efficiently and afford higher wages for its workers. But this would occur only if the national government had the means to judge and police corporate behavior. And that required a federal bureaucracy larger than the nation had ever known. Whatever the ideas and goals of the New Freedom, Wilson’s administration expanded federal regulation of business and the economy as much as Roosevelt’s.

The United States’ decision to declare war on Imperial Germany in the spring of 1917 accelerated the growth and transformation of federal power. To coordinate a vast mobilization of resources on the home front and overseas, the Wilson administration and Congress created several new agencies that sought to direct what businesses should produce and how they should treat their workers. The War Industries Board pressed industries to standardize the production of munitions and other essential products through business-government cooperation such as antitrust exemptions for business; the War Labor Board managed relations between workers and employers in workplaces that served the military effort; the Committee on Public Information “sold” the war as an altruistic, democratic mission. And, for the duration of the war, the government effectively nationalized the railroad and coal industries. All this growth in federal resources was quite expensive, of course. Financed by bond sales and higher income and corporate taxes, the federal budget grew from $1 billion in 1916 to a remarkable $19 billion in 1919. The 1918 Revenue Act temporarily increased taxes on the lowest income earners to 6 percent and the highest incomes to 77 percent.

Although those new agencies were dismantled soon after the war ended, Woodrow Wilson’s economic policies laid a foundation for the liberal state that has mostly endured. Conservatives charged that he violated the Constitution by expanding the powers of the presidency, creating bureaucracies that prevented business owners from running their companies as they wished in the private market, and exceeding constitutional authority under the Commerce Clause. In 1916, Wilson accepted the renomination of his party with a speech that responded to those criticisms and defended his progressive expansion of the regulatory power of the federal government. The debate about the role of public power in the twentieth century continued.

1. The federal income tax created in 1913 was meant to

2. The Federal Reserve System was created to

4. Woodrow Wilson earned the support of organized labor as a result of all the following actions except

5. After the United States officially entered World War I, the power of the federal government

6. By the time Woodrow Wilson left the presidency, he had accomplished all these objectives except

1. The developments depicted in the cartoon were most directly shaped by

2. Which of the following represented a continuation of the developments depicted in the cartoon?

3. This political cartoon most directly reflected a growing belief that

O’Toole, Patricia. The Moralist: Woodrow Wilson and the World He Made. New York: Simon and Schuster, 2018. 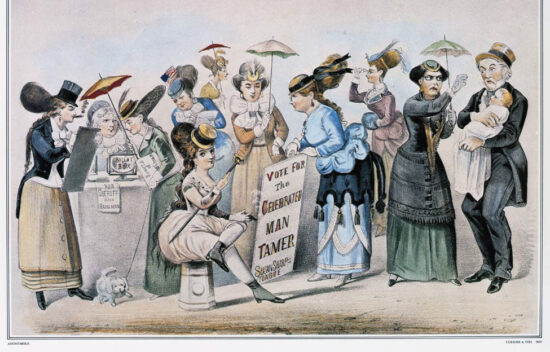 Chapter 10 of Life, Liberty, and the Pursuit of Happiness, BRI’s U.S. History Curriculum Resource, invites students to explore how the Progressive vision shaped American politics, society, and foreign policy from 1898 to 1917. 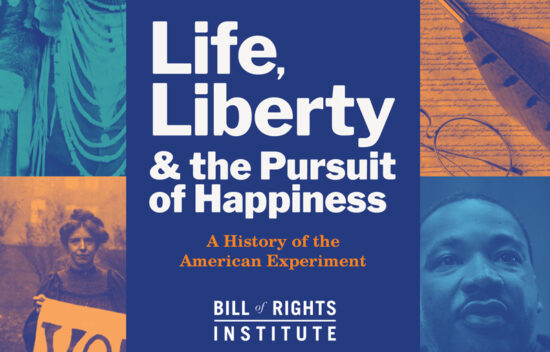