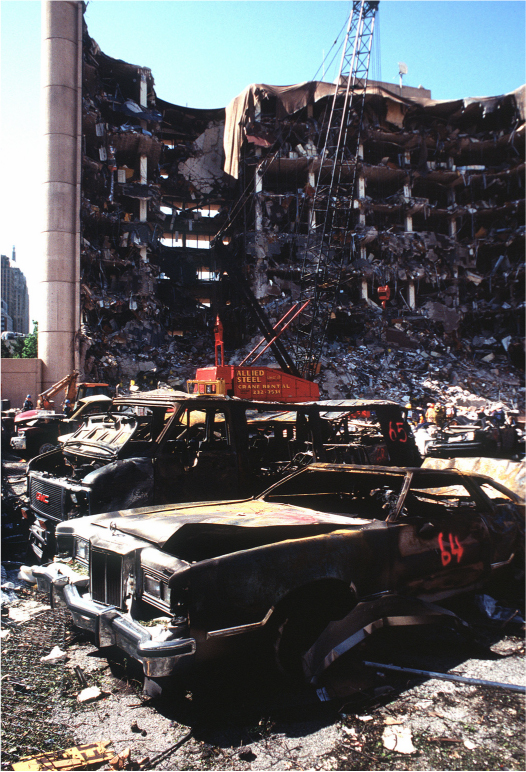 Use this narrative with the Rodney King and the Los Angeles Race Riots Narrative; the Tech Giants: Steve Jobs and Bill Gates Narrative; the Is Affirmative Action Justified? Point-Counterpoint; and the AIDS Memorial Quilt, 1987 Primary Source to discuss domestic issues between 1980 and the present day.

On the morning of April 19, 1995, an explosion destroyed a large section of the Alfred P. Murrah Federal Building in downtown Oklahoma City, Oklahoma. The effects were devastating: 168 people (including 19 children) were dead, several hundred were injured, much of the building was destroyed, and hundreds of nearby buildings were damaged. Recalling the truck bomb that had been detonated at the World Trade Center in New York City two years before, killing six, the media and many Americans immediately suspected Middle Eastern terrorists. But FBI investigators located what was left of a rental truck parked outside the building that contained what they said was the bomb that caused the explosion. The truck ultimately led them to Timothy McVeigh, a native of upstate New York just shy of 27 years of age, who was dubbed “the Oklahoma City Bomber.”

According to the FBI, McVeigh and co-conspirator Terry Nichols, a native of Michigan, had constructed the bomb out of agricultural fertilizer, diesel fuel, and other chemicals. Michael Fortier, an Army buddy of McVeigh’s, said he knew of the plot, which McVeigh had carried out with deadly precision using timed fuses and a getaway car. McVeigh, who claimed he was the sole perpetrator, was convicted in court and executed for the worst act of homegrown terrorism in American history. Nichols is serving 161 life sentences for his part in the bombing. Still, throughout the investigation, the focus of law enforcement and media always remained on McVeigh – who he was and why he did it.

The date of the bombing was significant. It was the two-year anniversary of the final day in the federal government’s siege of a heavily armed religious compound in Waco, Texas. The weeks-long confrontation at the compound had played out on live television and finally ended with a raid, a fire, and the deaths, mostly from smoke inhalation, of 86 people, including 27 children. According to the government, FBI agents were attempting to rescue the children and others being held against their will by a drug-taking, gun-toting cult leader named David Koresh. Members of a religious cult, called the Branch Davidians, were living and praying together peacefully in anticipation of what they believed was the coming end of the world. But the federal government saw the situation differently and premised the siege on suspected weapons, drugs, and child-safety violations. Two years later, after the Oklahoma City bombing, Attorney General Janet Reno said that she ultimately regretted the siege in Waco.

Waco proved to be the deadliest encounter between American civilians and their own government since 1890, when more than 100 American Indians were killed at Wounded Knee, South Dakota. But a 1992 federal government siege at Ruby Ridge, Idaho, had also resulted in civilian deaths. That confrontation began with federal marshals pursuing a fugitive, Randy Weaver, who had agreed to illegally modify weapons for white nationalist groups and failed to appear in court on firearms charges. Weaver and his family were confronted by armed officers at his home, and a firefight ensued that took the lives of a federal agent and Weaver’s 14-year-old son. The next day, hundreds of law enforcement officials under the command of the FBI arrived at the property and a sniper wounded Weaver, killed his wife, and wounded their dead son’s friend.

Some have pointed to Ruby Ridge as the day the homegrown militia movement was born. At the core of the militia movement is the idea that an irredeemably corrupt federal government is coming to take away the guns and property of Americans who simply want to be left alone. Ruby Ridge and Waco were not isolated incidents for those who cite regular reports of warrantless raids by drug-enforcement groups in violation of the Fourth Amendment. These raids, they claim, have resulted in the death of innocents, government seizures of property without due process of law in violation of the Fifth and Fourteenth Amendments, government-agribusiness alliances that have driven small farmers out of business, and the perceived overreach of federal agencies such as the U.S. Forest Service and the Bureau of Land Management.

White nationalists such as Weaver commonly echoed these anti-government concerns. They also espoused white supremacist ideologies that viewed non-whites as inferior. They even thought government policies should be informed by race and, therefore, opposed both racial integration and immigration. They wanted to return to a time before the Civil Rights Act of 1964 and Immigration and Nationality Act of 1965 ushered in an era in which, they say, white people and white culture were being systematically replaced and destroyed.

McVeigh said he was motivated to bomb the federal building in Oklahoma City by the events at Waco and Ruby Ridge, the prime examples of what he saw as a government at war with its citizens. In open court he explained: “I wish to use the words of Justice Brandeis dissenting in Olmstead [v. United States (1928)] to speak for me. He wrote, ‘Our government is the potent, the omnipresent teacher. For good or ill, it teaches the whole people by its example.'”

McVeigh was, in fact, unremarkable until the bombing. He was an Eagle Scout and security guard, an ex-Army soldier decorated for his service in the Gulf War. He said he was disillusioned with government orders that had resulted in the deaths of Iraqi civilians, whom he saw as no different from himself. He considered the federal government a bully that perpetrated atrocities abroad and at home, abandoning and attacking its own people. He began associating with white nationalists and people who held radical views of gun rights. He had traveled to Waco to sell pro-gun rights bumper stickers and witnessed the siege first-hand.

In addition to the passage McVeigh had quoted in court, Justice Brandeis had concluded his dissent in Olmstead by saying:

“Crime is contagious. If the Government becomes a lawbreaker, it breeds contempt for law; it invites every man to become a law unto himself; it invites anarchy. To declare that, in the administration of the criminal law, the end justifies the means to declare that the Government may commit crimes in order to secure the conviction of a private criminal would bring terrible retribution.”

On April 20, 1996, President Clinton signed the Antiterrorism and Effective Death Penalty Act. Among its many provisions, the law limited the ability of those accused of crimes in state courts to file federal-court habeas corpus challenges to their arrest and detention. The law was upheld and has resulted in fewer state-court death penalty convictions being reviewed and overturned by federal judges. At the same time, the number of anti-government militia groups skyrocketed from 220 to more than 850 by the end of 1996. As the years progressed, American politics became increasingly polarized, while public approval of the institutions of the federal government declined.

Like his predecessors, Donald Trump was elected president while railing against Washington, DC, and promising to fix what was perceived as a broken government. But unlike his predecessors, Trump took positions and used rhetoric that were more extreme. His popularity was rooted in a wave of populist anger against big government and wealthy elites across the western world. The anger that motivated fringe groups in the 1990s had become more widespread.

1. Who was the “Oklahoma City bomber”?

2. The context of the Oklahoma City bombing included all the following except

3. Which statement regarding the Oklahoma City bombing is not correct?

4. The homegrown militia movement, which arose in the 1990s,

5. The polarization of U.S. politics as the nation entered the twenty-first century resulted in

“The FBI issued a five-year strategic plan in May 1998 . . . With this plan, the FBI designated national and economic security, including counterterrorism, as its top priority for the first time in the Bureau’s history. The plan emphasized that the FBI’s goal in the counterterrorism arena was – to prevent horrific acts’ such as the 1993 World Trade Center and 1995 Oklahoma City bombings. The plan recognized that the Bureau needed to substantially enhance its collection, analysis, and dissemination of intelligence in order to understand the terrorist threat, and thus become more proactive on national security issues.”

Refer to the excerpt provided.
1. This excerpt most directly reflected a growing belief that

2. This excerpt was most directly shaped by

3. The excerpt most directly led to

Federal Bureau of Investigation. Photograph of the Murrah Federal Building after it was bombed. https://www.fbi.gov/image-repository/okbomb.jpeg/@@images/image/high

Zuppello, Suzanne. “What We Can Learn from Oklahoma City Bombing in the Age of Trump.” Rolling Stone.February 3, 2017. https://www.rollingstone.com/culture/culture-features/what-we-can-learn-from-oklahoma-city-bombing-in-age-of-trump-195904/