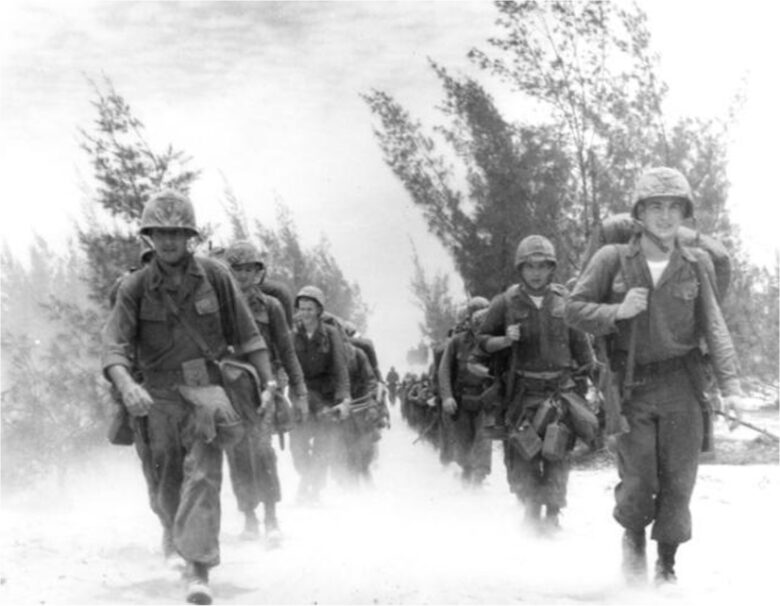 Use this narrative with The Vietnam War Experience: An Interview with Veteran William Maxwell Barner III Primary Source to highlight the experience of the U.S. military during the Vietnam War.

In the months immediately following his overwhelming triumph in the 1964 presidential election, Lyndon B. Johnson made several crucial and politically fraught decisions that transformed America’s military role in the ongoing war in Vietnam. Johnson and his chief foreign policy advisers recognized that their South Vietnamese allies teetered on the brink of political collapse, that military momentum had shifted to the Viet Cong guerrillas and their patrons in Hanoi, and that American inaction could well hasten a communist victory. On January 5, 1965, Defense Secretary Robert S. McNamara and National Security Adviser McGeorge Bundy bluntly informed Johnson that “our current policy can lead only to disastrous defeat.”

Fearful that such an outcome would damage America’s international credibility, embolden its communist adversaries in Moscow and Beijing, and derail his ambitious domestic reform program, Johnson ordered a dramatic escalation of the U.S. military commitment. In mid-February, after a few retaliatory air strikes above the 17th parallel (where Vietnam was divided into North and South), he approved a program of sustained aerial bombardment of North Vietnam. The dispatch of U.S. ground forces quickly, and almost inevitably, followed the onset of the air war. Commanding General William C. Westmoreland worried that without combat troops to provide security, American air bases in South Vietnam would remain highly vulnerable to enemy attacks. Consequently, he asked for two battalions of marines to help defend the key air base at Da Nang. On February 26, the president approved that request, and on March 8, approximately 3,500 U.S. troops waded ashore at the beaches of Da Nang. At the end of July, Johnson announced he was immediately dispatching an additional 50,000 U.S. troops to Vietnam, while privately directing that another 50,000 be sent by the end of the year.

For its part, North Vietnam tried to match the U.S. escalation, hoping the infiltration of its own regular forces into South Vietnam would help trigger the collapse of the Saigon regime before the U.S. military buildup could make a decisive difference. In the fall of 1965, the two contending armies clashed openly in South Vietnam’s central highlands.

The fiercest and most consequential of those clashes occurred in the Ia Drang Valley located in the Central Highlands south of Danang. Elements of the highly mobile U.S. 7th Cavalry Division, using helicopters for high-speed mobility, were conducting search-and-destroy missions in the area when they were attacked by three regiments of the Peoples’ Army of Vietnam (PAVN). Their leader, Colonel Nguyen Huu An, wanted to engage U.S. forces to learn their tactics and abilities. The assaults formed part of North Vietnam’s bold effort to drive to the South China Sea; if successful, that effort could have cut South Vietnam in half.

On November 14, 1965, the 7th Cavalry landed at X-Ray landing zone while B-52s bombed the surrounding enemy positions and nearby artillery provided fire support. For the next three days, the two sides engaged in bloody combat at close quarters, punctuated by heavy U.S. artillery, napalm, and B-52 strikes that exacted heavy losses on enemy forces. When the smoke cleared, the United States had lost 305 soldiers and nearly as many were wounded. According to the imperfect U.S. statistical accounting, North Vietnam had lost 3,561 troops.

Westmoreland was pleased he had checked the enemy’s drive to the sea and was heartened by the better than ten-to-one ratio of North Vietnamese to U.S. troops killed in action. He touted the Ia Drang fighting as “an unprecedented victory.” It seemed to validate his attrition strategy of using overwhelming firepower to produce high enemy body counts rather than taking territory or decisively defeating armies. That strategy was based on the calculation that if the United States could inflict casualties on the North Vietnamese and Viet Cong at a rate faster than the enemy could recruit replacements, then a “crossover point” could be reached and military victory attained. Defense Secretary McNamara drew a more sober lesson. He warned in the wake of the bloodletting at Ia Drang that monthly U.S. casualty numbers were likely to remain alarmingly high and that even more U.S. troops would be required for the United States to prevail militarily.

The North Vietnamese drew their own lessons. Most fundamentally, they recognized that frontal clashes with a much better-armed adversary, enjoying total air superiority, worked to the distinct disadvantage of PAVN and North Vietnamese forces. Accordingly, for the duration of the war, they carefully avoided conventional battles, preferring guerrilla-style, small-unit actions that allowed them to control the rate of casualties. Hanoi’s goal from the beginning of the U.S. troop buildup in mid-1965 was not to defeat the foreigners but to wait them out. “Don’t worry,” North Vietnamese President Ho Chi Minh told his associates. “I’ve been to America. I know Americans. They are an impatient people. They will leave.” If the PAVN and Viet Cong stayed in the contest, the United States would grow weary of a protracted conflict; by inflicting significant casualties on the Americans, they could hasten that process, no matter how great their own losses. “American boys being sent home in body bags will steadily increase,” prophesied North Vietnamese General Vo Nguyen Giap. “Their mothers will want to know why. The war will not long survive their questions.”

America’s goals were as foggy as North Vietnam’s were clear cut, and as unrealistic in light of prevailing military, political, and socioeconomic conditions as Hanoi’s proved largely compatible with those very same conditions. The United States not only sought to block a communist victory in the south but to prevent further communist advances in and beyond Southeast Asia, to reassure allies worldwide about U.S. resolve, and to deter Moscow and Beijing from supporting wars of national liberation. The Johnson administration was convinced that those broader goals required that the United States defeat the insurgency and its northern backers, not just hold off a communist victory. Yet, wary of any actions that might provoke direct Chinese or Soviet intervention, the Johnson administration also believed it had to pursue its objective by means of a limited, rather than a total, war.

Therein lay a major inconsistency in American strategy. Simply put, how could the United States, with anything less than a total commitment, defeat so determined a foe as North Vietnam, a nation willing to make unimaginable sacrifices to advance its cause? And how could the United States force Hanoi to cease its support for the insurgency in the south without resorting to more extreme measures, such as the bombing of population centers, the invasion of the north, even the use of nuclear weapons? Yet to resort to extreme measures of that sort would have represented a wholesale repudiation of American values. It would also have been so wildly disproportionate a response to the Vietnam problem that the very allies the United States was seeking to reassure would more likely have been repulsed. Finally, such extreme measures likely would have invited the very countermoves from Beijing that Johnson most feared.

1. President Lyndon B. Johnson authorized a dramatic escalation of U.S. military involvement in Vietnam in 1964 primarily because

3. General Westmoreland pursued an “attrition strategy,” meaning that the United States wanted to

4. After the battles in the Vietnamese central highlands in 1965, the North Vietnamese strategy became

5. The battle of the Ia Drang Valley

1. Which of the following was a direct result of the trend demonstrated in the chart?

2. Which of the following was a significant cause of the trend from 1963 to 1968 shown in the chart?

3. The military conflict in the area identified in the chart was most directly shaped by

Moore, Harold G., and Joseph L. Galloway, We Were Soldiers Once And Young: Ia Drang, the Battle that Changed the War in Vietnam. New York: Random House, 1992.