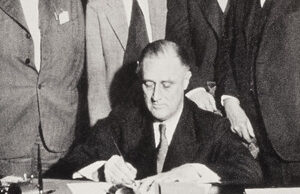 The framers of the Constitution believed that the United States would refrain from that the greatest safeguard against government tyranny was to limit the powers of government by specifically enumerating them. That is why the powers of Congress are limited to those enumerated in Article I of the Constitution and those “necessary and proper” for implementing them. Article I vests in Congress only those legislative powers “herein granted.” No such limits appear in Article II which vests the President with the executive power. The limiting phrase “herein granted” do not appear. In view of the Founders’ fears of tyranny it is clear that the absence of those two words was not intended to let the president do whatever he wanted. But what limits did they mean to impose? Historically, disputes over the extent of executive power have erupted in two different ways. One pits the President against Congress. Did he usurp power that the Constitution gives to the other branch? The other unites the President and the Congress against a strict construction of the Constitution. Are they conspiring together to obtain powers for the federal government that the Constitution denies them?

A major dispute of the first kind erupted during the first presidential term. In 1793 George Washington issued a Neutrality Proclamation declaring taking sides in the war between Britain and France. Supporters of France, including James Madison and Thomas Jefferson, denounced the Proclamation not only because they wanted to side with France but because they claimed that the President had no authority to issue such a proclamation. As Commander in Chief, he was responsible for carrying out the orders of Congress regarding war and peace. Washington’s supporters, especially Alexander Hamilton, countered that the Constitution only gave Congress the power to declare war. Congress was restricted to that enumerated power. The responsibility to preserve peace, unless expressly propelled into war by Congress, was therefore the responsibility of the Executive. Washington prevailed. Congress did not repudiate his Proclamation.

Jefferson’s strict view of the federal government’s enumerated powers was tested when he became President. The Constitution does not specifically authorize the federal government to acquire new territory or to incorporate such territory into the Union; nonetheless, President Jefferson’s Louisiana Purchase doubled the size of the Union and Congress approved it. Jefferson himself believed that a constitutional amendment was needed to enable the US to make the Purchase and incorporate the new territories. He even wrote a draft for such an amendment. But his advisors argued that speed was of the essence: Emperor Napoleon of France might change his mind about selling, and it might take years for a sufficient number of states to ratify the amendment. Jefferson was persuaded that the power to negotiate treaties that Article II granted him was sufficient to enable him, with congressional approval, to purchase the territory. The more difficult question of how to incorporate it into the Union could then be resolved in a more leisurely fashion.

After Congress approved the Purchase, John Quincy Adams proposed a constitutional amendment enabling the government to incorporate new territory in the Union, but Jefferson’s allies in Congress rejected the idea. Jefferson believed the Purchase was key to creating great new opportunities for Americans. Because the Constitution established a process for creating new states, the acquired territories would not need to be ruled from Washington—they would become sovereign states of their own. In the end, Jefferson did not choose to endanger this vision by subjecting it to the uncertainties of the constitutional amendment process.

In contrast to Jefferson, President Grover Cleveland chose not to cooperate with Congress in going beyond what he considered to be the strictly enumerated powers of the federal government. In 1887, he vetoed a bill to appropriate $10,000 to buy seeds to give to farmers in Texas whose crops had failed due to severe and prolonged droughts. In many respects this bill was unexceptional. Article II of the Constitution grants Congress the power to tax and spend, thus Congress clearly had the power to appropriate the $10,000 sum. But the Constitution did not give the federal government power to aid individuals. In Cleveland’s view, Congress’s desire to help Texas farmers had blinded it to the need to accomplish a deeper purpose: encouraging self-reliance and mutual aid by minimizing government intrusion.

In responding to the Great Depression, Herbert Hoover adopted a strict and Franklin Delano Roosevelt a loose construction of the powers of Congress. Hoover was far less absolutistic than Grover Cleveland had been, but he did not believe that the emergency conditions that the Great Depression imposed allowed him to ignore what he understood to be the constitutional limits on federal power. He supported voluntary forms of business cooperation with the government providing guidance and some forms of coordination, but he rejected efforts to endow these voluntary bodies with any law-making or law-enforcing powers. He also rejected the establishment of any new executive agency that would claim emergency powers not specified in the Constitution. His major initiatives rested on enumerated powers found in Article I: foreign commerce, and the banking power derived from the taxing and spending clause. He signed the Smoot Hawley Tarriff Bill designed to protect American farmers against competition from foreign imports and the statute establishing the Reconstruction Finance Corporation to provide emergency loans to failing major financial and industrial corporations. But he firmly opposed providing direct financial help to individuals for much the same reasons that Cleveland would not help Texas farmers. The Constitution provided no such authority and the receipt of such unearned aid would undermine individual responsibility and initiative.

Roosevelt took the opposite tack. In his First Inaugural Address, he announced that he would treat the task of economic recovery “as we would treat the emergency of a war” and he urged Congress to grant him “Executive power to wage a war against the emergency, as great as the power that would be given to me if we were in fact invaded by a foreign foe.” But FDR rarely had to invoke emergency powers because Congress supported his loose constitutional constructions.

The massive intervention of the New Deal into virtually all sectors of the economy—the granting of new rights to labor unions, the dispensing of relief aid to individuals, and the establishment of old age pensions—were based on loose construction of the Commerce Clause, the Necessary and Proper Clause and the General Welfare clauses all found in Article I. FDR interpreted “commerce” to mean almost any form of production, sale, or transport of goods or services that might in any way influence economic conditions in more than one state. For example, a federal law to regulate relations between labor and management was justified on the grounds that conditions of employment had an indirect, but nonetheless meaningful, impact on commerce.

Prior to the New Deal, the general welfare clause had never been invoked to justify a new law. The consensus of judges and law makers was that it had little meaning since it was followed by a specific enumeration of the powers of Congress. Why bother to enumerate powers if the Congress can simply act in the general welfare? FDR took the opposite view. Some very important New Deal policies were based on the claim that the federal government had broad authority to provide for the “general welfare.” In a similar vein, the Necessary and Proper Clause was taken to mean that a very wide variety of novel interventions by government into the economy were constitutional if they were valuable tools for serving the general welfare. By the 1940s, FDR and the Supreme Court were treating the commerce power as a power to preserve the health and vitality of the national economy; hence, the extension to wage and hours legislation, working conditions etc.

FDR believed that the new economic conditions brought about by the new industrial economy demanded the establishment of a set of positive economic rights—most importantly the right to economic security in one’s old age—to supplement the political rights propounded in the Declaration of Independence and secured in the Constitution. Political rights placed limits on what government could do. In FDR’s view, economic rights demanded positive action from government and, therefore, required a loose construction of the Constitution to enable government to secure them.

The President is sometimes called “Chief Legislator” in that he can use what Theodore Roosevelt called the “bully pulpit” to advocate for what he believes will be beneficial laws. The President’s understanding of the Constitution, therefore, will influence not only the degree to which he seeks to actively promote laws, but also the kinds of regulations he will propose.

Dr. Marc Landy is Professor of Political Science at Boston College. A graduate of Oberlin College, he earned his Ph.D. in Government from Harvard University. He has also co- authored several books, including American Government: Balancing Democracy and Rights and Presidential Greatness.