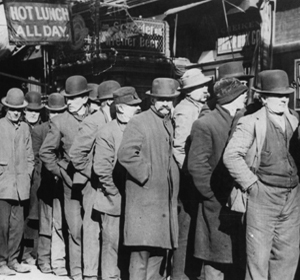 Did New Deal spending and programs succeed in restoring American capitalism during the Great Depression and should the government have spent more money to help the New Deal succeed, or did the New Deal spend unprecedented amounts of money on relief and recovery efforts but ultimately fail to stimulate a full economic recovery?

When President Franklin Delano Roosevelt gave his inaugural address on March 4, 1933, America was in the midst of financial collapse. Banking holidays closed banks in 28 states, and investors traded their dollars for gold to have tangible wealth. The president reassured Americans, “This great Nation will endure as it has endured and will revive and will prosper.” He listed three goals to shore up capitalism through his New Deal: banking regulation, laws to curb speculation, and the establishment of a sound currency basis. Roosevelt shored up the financial sector through regulation to restore the public trust that mismanaged banks and financial speculators had destroyed. His New Deal gave the federal government regulatory responsibility to smooth economic downturns. Over the next eight years, the New Deal’s economic practices and spending helped create recovery and restore capitalism.

By the time Roosevelt was inaugurated in the spring of 1933, almost 5,500 banks had failed and, in many cases, their customers had lost their deposits and life savings. Therefore, Roosevelt’s first task was to restore confidence in the banking system, and so, on March 6, he declared a four-day national bank holiday. While banks were closed, Congress quickly approved the Emergency Banking Relief Act to audit the financial viability of banks and provide emergency currency. When banks reopened, the federal government guaranteed that banks were safe, and, in fact, deposits outnumbered withdrawals. The next month, Roosevelt banned the use of gold for foreign exchange and increased its price to increase the U.S. gold supply and thereby cause inflation in a depressed economy suffering deflation. By June 1933, legislation required full disclosure for stock sales, and the Glass-Steagall Act separated consumer and investment banking to prevent bank speculation with consumer deposits. Congress created the Securities and Exchange Commission to regulate the stock market. These measures restored Americans’ faith in the financial system.

However, Roosevelt had another goal: to put the nation back to work. When Roosevelt took office, churches and city governments had run out of charity relief funds and Congress had appropriated only $500 million in the Emergency Relief Act. Unemployment was 25 percent nationwide and even higher in most industrial cities. In 1933, Congress created the Federal Emergency Relief Administration, which spent $3.1 billion dollars putting 20 million people to work over the next two years. Congress also created the Civilian Conservation Corps, which, by 1935, employed 500,000 young men on public forestry projects and allotted their families $25 a month to stimulate the economy. Because 82 percent of Americans supported the program, it could have been expanded with even higher appropriations. Also in 1933, Congress passed the Public Works Administration as part of the National Industrial Recovery Act and spent $3.3 billion on public works infrastructure projects such as schools and hospitals. Federal funds spent on direct-relief stipends and work programs increased personal spending to boost the economy.

By 1935, the financial system functioned more smoothly, but the economic situation remained dire. Production lagged. Unemployment had dropped from a high of 25 percent in 1933 to 22 percent. Personal income remained 20 percent below 1929 figures. So, in 1935, the Emergency Relief Appropriation Act created the Works Progress Administration (WPA). Roosevelt wanted to end direct relief to able-bodied workers, and the WPA employed them at a cost of $4.88 billion. Ultimately, the federal government under the WPA employed 8.5 million, or one out of every three unemployed people, doing everything from building dams to writing tourist guides to planting trees. These programs seemed to work, and the depression lifted by early 1937. In the first quarter of that year, unemployment dipped to 14 percent, production was up 40 percent over 1934, and gross personal income grew by 30 percent.

Buoyed by these figures, Roosevelt honored his 1936 reelection promise to balance the budget and cut $2 billion from public employment programs. Simultaneously, the Federal Reserve required banks to increase gold investments to 50 percent of their currency reserves. The result was a tight money supply and cuts in government-funded employment that curbed consumer demand. Industrial activity dropped to 1934 levels, unemployment figures shot up to 20 percent, and the stock market lost one-third of its value. Critics called it the “Roosevelt Recession.” Although Roosevelt and Congress responded by increasing federal spending in 1938 and secured $5 billion for public works and relief, unemployment remained high at 20 percent. He had made a strategic error.

Had New Deal spending continued through 1937 to fund economic growth, perhaps the nation would have been better equipped to mobilize against fascism in 1939. Battered by a decade of depression and the 1937 industrial downturn, the nation’s military hardware was antiquated and scarce. In November 1938, Roosevelt demanded the building of “airplanes and lots of them,” and in 1940, he secured $1.8 billion in new military spending. The military spending buildup helped defend Britain from German assaults and built the fighting force that enabled the United States to enter World War II. The wartime spending in the 1940s also finally ended the Great Depression.

In the spring of 1934, encouraged by Harvard law professor Felix Frankfurter, President Roosevelt sat down in the White House for a chat with British economist John Maynard Keynes. Keynes had initially risen to celebrity after World War I with a devastating critique of the Versailles Treaty. In 1936, he would publish his General Theory of Employment, Interest and Money, the most influential work of economic analysis since Adam Smith’s An Inquiry into the Wealth of Nations (1776). In the General Theory, with wit, bravado, and mind-numbing equations, Keynes sought to demolish the core assumptions of classical economics, which maintained a belief in a rational free market where supply and demand remained always self-correcting.

Since the stock market crash and the onset of the depression, Keynes and other British economists such as Roy Harrod had urged western governments to stop tinkering with monetary solutions and adopt an aggressive program of government spending, especially in the areas of public works and housing, to stimulate the economy during the depression. Keynes stressed these ideas in his session with Roosevelt, who soon complained to labor secretary Frances Perkins: “He [Keynes] left a whole rigamarole of figures. He must be a mathematician rather than a political economist.” Roosevelt’s comments about Keynes open a window on one basic reason why the president’s New Deal, despite unprecedented levels of federal spending, never achieved full economic recovery between 1933 and 1940. Although surrounded with key advisers such as Federal Reserve chairman Marriner Eccles, who understood Keynes and his central message about the importance of government spending, Roosevelt did not grasp these ideas intellectually. He remained at heart a fiscal conservative, little different from Herbert Hoover. Roosevelt condoned government spending when necessary to “prime the pump” for recovery and to combat hunger and destitution, but not as a deliberate tool of economic recovery.

Until the end of the decade, he remained an economic moralist who abhorred government deficits, not a convert to countercyclical Keynesian theory to spend more or cut taxes to stimulate the economy during a depression. Echoing Hoover, Roosevelt had pledged during the campaign of 1932 to reduce government spending and the Economy Act of 1933 did just that. It trimmed salaries, merged departments, and cut nondisability payments to veterans. When Congress authorized $3.3 billion for public works projects in the National Industrial Recovery Act, the President wanted that sum eliminated and soon appointed the parsimonious interior secretary Harold Ickes to dole out the dollars. “Honest Harold” spent only $2.8 billion of the original appropriation. Soon displaying his fiscal conservatism again, Roosevelt wielded the veto pen when Congress insisted that veterans receive their World War I cash bonus.

On April 8, 1935, Roosevelt signed the single largest expenditure in American history to that date, $4.8 billion in the Emergency Relief Appropriation Act, of which $1.4 billion would go directly to the new federal relief agency, the Works Progress Administration. Until its demise during the war, WPA spent more than $11 billion and employed more than eight million Americans who built roads, hospitals, schools, and airports or performed plays, composed music, and wrote oral histories. But the potential economic stimulus of this measure was offset by the Revenue Act of 1935, which raised the maximum personal income tax levy to 75 percent, and the Social Security Act, which soon imposed payroll taxes on working Americans and their employers. Tax reform, the regressive payroll tax, and a cut in work relief that Roosevelt endorsed finally sucked the air out of the economy and it tumbled back into a frightening recession in 1938. The stock market fell sharply, national income went down 13 percent, and federal relief rolls grew by 500 percent.

Faced with a Hoover-like crisis, Roosevelt asked Congress for another $3 billion in spending for the WPA, Public Works Administration (PWA), and other programs in 1938, but this whipsaw from belt tightening to fiscal expansion only fomented greater uncertainty and confusion, especially among businessmen who remained reluctant to invest in new plants or equipment. By the end of 1939, unemployment remained around 10 million persons. As one business leader stated: “Are we to have inflation or deflation, more government spending or less? Are new restrictions to be placed on capital, new limits on profits? It is impossible to even guess at the answers.”

Roosevelt’s fiscal caution and incoherence provides explanation for the New Deal’s failure to achieve recovery. To that can be added the president’s growing commitments to political and economic reforms, including taxation, labor relations, banking, and stock market regulations, which often left the business and financial leaders dazed, angry, and confused.