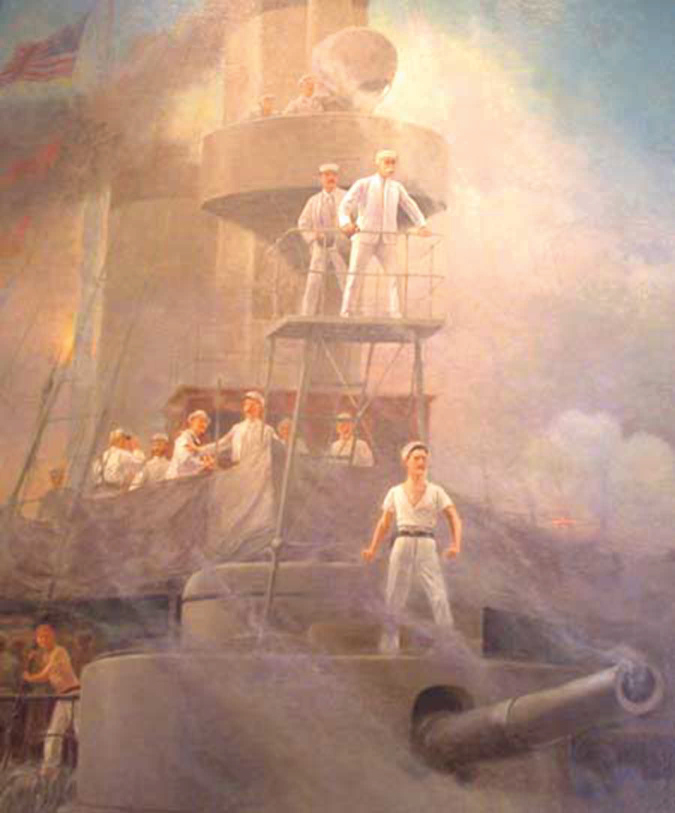 Use this Narrative with the Remember the  Maine! and Theodore Roosevelt and the Rough Riders Narrative and the Redfield Proctor vs. Mark Twain on American Imperialism, 1898-1906 Primary Source to explore the U.S. role in overseas conflicts.

The last quarter of the nineteenth century saw a new wave of American expansionism into the Pacific. A popular movement rooted in newfound industrial wealth, a desire for trade, strategic interests, and a sense of cultural and racial superiority, this “New Manifest Destiny” asserted spurious scientific foundations for its claims of racial and cultural superiority, as American writers echoed the widespread ideas of social Darwinism by applying the theory of natural selection to social, cultural, political, and racial issues and arenas.

Interest in trade with China led to several war scares and crises over the control of Pacific island bases, needed for refueling steam-powered vessels at coaling stations on the long voyage. American interest in Samoa nearly led to war with Germany in 1889 and again in 1899. The Sandwich Islands (now Hawaii) were targeted for annexation after American intervention in a local revolution and civil war in 1894. Expansionist fever aroused during the Spanish-American War led to the U.S. annexation of Hawaii on July 6, 1898. The Spanish Empire had imperial possessions around the world but had been slowly declining over the previous few centuries. Spain had lost most of its control over Latin America when countries there asserted their independence in the earlier part of the nineteenth century. Among other possessions, Spain still retained a tenuous hold on Cuba, Puerto Rico, Guam, and the Philippines, but growing American ambitions in the Caribbean and Pacific meant the Spanish might be challenged for those as well at the end of the century.

A worldwide depression starting in 1893 and a 40% American tariff that closed the United States to Cuban sugar imports worsened an old colonial dispute in Cuba. Intense poverty and Spanish brutality grew into rebellion against Spanish rule in 1895. Spanish general Valeriano Weyler, known as “the Butcher,” put many Cubans into concentration camps to isolate the rebels. President Grover Cleveland opposed widely popular demands for intervention, but he was replaced by President William McKinley in 1897. McKinley also opposed war, but the cause of intervention was stoked to a fever pitch by yellow journalists who favored expansionary foreign policies and by politicians like Theodore Roosevelt, then assistant secretary of the Navy. When the USS Maine, an armored cruiser, unexpectedly sank in Havana Harbor in early 1898, most likely because its boiler blew up by accident, the press and openly interventionist politicians blamed a Spanish mine. McKinley now bowed to public pressure and asked Congress for a declaration of war, which came on April 24, even though European pressure had already led Spain to concede virtually every American demand.

A key figure in what started as a wildly popular war against a feeble opponent was Theodore Roosevelt. The traditional story is that his secret machinations two months before the war ensured that the first shots were fired not in Cuba but in the Philippines. Yet a cable sent to Commodore George Dewey during the crisis, ordering him to prepare “for offensive operations in the Philippine Islands,” was actually a standard naval precaution. Dewey went to the Philippines under orders from the White House to destroy the Spanish Pacific Squadron based at Manilla Bay, led by Rear Admiral Patricio Montojo.

Under cover of dark on April 30, 1898, Dewey entered the bay with the U.S. Navy Asiatic Squadron, consisting of four modern cruisers, two gunboats, and several unarmed auxiliaries. On May 1, before dawn, he attacked the mostly obsolete, seven-ship Spanish Pacific Squadron. The battle was a lopsided affair in which the modern American warships easily outmatched the older Spanish vessels. Dewey steamed back and forth across the harbor in line formation, pounding the enemy from outside the range of the batteries on the shore.

Montojo ordered a desperate charge intending to ram the enemy ships, but his flagship was shot apart and retreated to shore, where it was scuttled. After a two-hour disengagement and a conference with his captains, Dewey recommitted to the fight and pounded the Spanish once again. It was a one-sided slaughter, with only a single American fatality reported but many hundreds of Spanish dead and more wounded. After shelling Spanish shore guns and forts, Dewey landed a party of marines on May 2 who completed the destruction of the shore forts and flotilla. However, he lacked sufficient troops to take Manilla until he was reinforced on June 30. By then, Britain and Germany had each sent powerful naval forces to the Philippines in a show of gunboat diplomacy.

With another flotilla destroyed at Santiago de Cuba in a second lopsided defeat on July 3, Spanish forces there surrendered to an American army on July 16. With its two fleets wiped out, Spain’s remaining land forces in the Philippines and Cuba were now stranded. The war thus ended when Madrid asked for peace terms after just 10 weeks of fighting. Americans were in a euphoric mood, which was captured by John Hay, soon-to-be secretary of State, who wrote: “It has been a splendid little war.” Public opinion and Congress demanded harsh treaty terms. McKinley essentially dictated a draft agreement to Spain, demanding surrender of all claims to Cuba and Puerto Rico, cession of Guam, and American military occupation of Manilla and its harbor pending agreement on the ultimate disposition of the Philippines, to be negotiated at Paris. Spain accepted a preliminary cease fire on August 12. Spanish forces in Manilla surrendered the next day. Formal treaty talks began in Paris on October 1.

The five-member U.S. delegation was dominated by expansionists who wanted greater global power for the United States in world affairs. Throughout the country, expansionists insisted the United States keep the Philippines as a base for expanding trade and influence in the Pacific. Advocates of American naval power, like Roosevelt, argued that if the United States did not keep the archipelago, Germany or Japan would take it instead. Business and trade interests quickly swung into action to invest in the Philippines. Yellow journalists proclaimed a new era of Manifest Destiny, while missionaries offered victory prayers and gratitude for providential righteousness. But just below the surface, the country was badly divided on what to do next.

In the treaty signed on December 10, Spain surrendered the Philippines for $20 million. Almost immediately, an anti-imperialist movement that included public figures like writer Mark Twain took shape in the United States. It argued that colonialism was un-American and unconstitutional, and that the annexation of the Philippines was a betrayal of the crusading liberal and idealistic war Americans had waged to liberate Cuba from colonial oppression. In a mood of division and animosity, the Treaty of Paris was approved by the Senate by just one vote more than the two-thirds majority needed.

Before Dewey took Manilla, the Spanish had crushed a Filipino nationalist revolt led by General Emilio Aguinaldo, who was forced into exile. Aguinaldo returned on an American warship when Dewey asked him to lead another revolt against Spain, as part of the American military effort. In three months, Aguinaldo’s Filipino army defeated the Spanish on land, except for the area around Manilla. On June 12, he declared an independent Philippine Republic. He thought he had the backing of the United States for this, because Washington had supported Cuban independence from Spain. However, Dewey saw Aguinaldo as a divisive and factional leader, incapable of uniting or properly defending the Philippine islands. With the transfer of the archipelago from Spain to the United States pending, Aguinaldo led a second revolt, this time against what nationalist Filipinos saw as an unjust American betrayal and colonial occupation. The Philippine Revolt (in older American terminology), or the Philippine-American War, is usually dated as lasting from February 4, 1899, to July 4, 1902.

Whereas Filipinos saw themselves as a nation at war with a foreign power, Americans insisted the fighting was an illegal insurrection against their authority. That provided legal cover to treat Filipinos as criminal rebels rather than legitimate combatants. The war quickly turned ugly as a result. Filipino forces outnumbered Americans but were badly underequipped and outgunned. Sometimes they resorted to bows and knives against rifles, machine guns, and artillery. Fighting was marked by small-unit guerrilla combat and ambush by Filipinos, and retaliatory sweeps that included massacres, torture, burning of villages, and other atrocities by American forces. U.S. generals adopted brutal “pacification” methods that Filipinos recognized from their hard war against Spanish colonial occupation: suppression tactics meant to physically isolate the guerrilla fighters from the civilian population in “zones of protection.” That policy contributed to large-scale civilian deaths in disease-ridden internment camps.

President Aguinaldo was captured in 1901, gutting the military and political leadership of the Filipino resistance and leading to intensification of the American counterinsurgency campaign. By the end of the Philippine-American War in 1902, more than 20,000 Filipino fighters and 4,200 American soldiers were dead. Perhaps as many as 200,000 Filipino civilian deaths can be attributed to war-related disease and starvation, but the final numbers remain controversial.

Annexation followed by a guerrilla war made the Philippines a flashpoint for a profound debate over the role of American empire in the Pacific. Many Americans repudiated the new colonial role, which became the subject of a bitter national political debate before World War I. The extension of American military power and trade interests into the Central Pacific, based on its focus on Guam, Hawaii, and, above all, the Philippines, was followed by the Spanish-American War and its related annexations. The United States was already a world power by the 1890s, though it had mixed views about accepting that role until World War II left it the dominant world power across the Atlantic as well. As for the Philippines, the Filipinos finally achieved independence on July 4, 1946, after forming a close alliance with the United States to resist Japanese occupation during World War II.

1. Expansionist fervor at the end of the nineteenth century led to the United States’ acquisition of all the following except

2. Anti-imperialists opposed the United States’ annexation of the Philippines because it would likely

3. How did the concept of social Darwinism affect the Philippine-American War?

4. The immediate context of the Philippine-American War was

5. The Filipino revolt against American governance at the beginning of the twentieth century occurred after

6. The actions of Uncle Sam as represented in the cartoon would be opposed by

“When I . . . realized that the Philippines had dropped into our laps I confess I did not know what to do with them. . . . I am not ashamed to tell you, gentlemen, that I went down on my knees and prayed Almighty God for light and guidance more than one night. And one night late it came to me this way I don’t know how it was, but it came: (1) That we could not give them back to Spain that would be cowardly and dishonorable; (2) that we could not turn them over to France and Germany our commercial rivals in the Orient that would be bad business and discreditable; (3) that we could not leave them to themselves they were unfit for self-government and they would soon have anarchy and misrule over there worse than Spain’s was; and (4) that there was nothing left for us to do but to take them all, and to educate the Filipinos, and uplift and civilize and Christianize them.”

1. The sentiments in this excerpt were most directly influenced by

2. The events described in the excerpt occurred in response to

3. The sentiments expressed in the excerpt contributed most directly to which of the following?