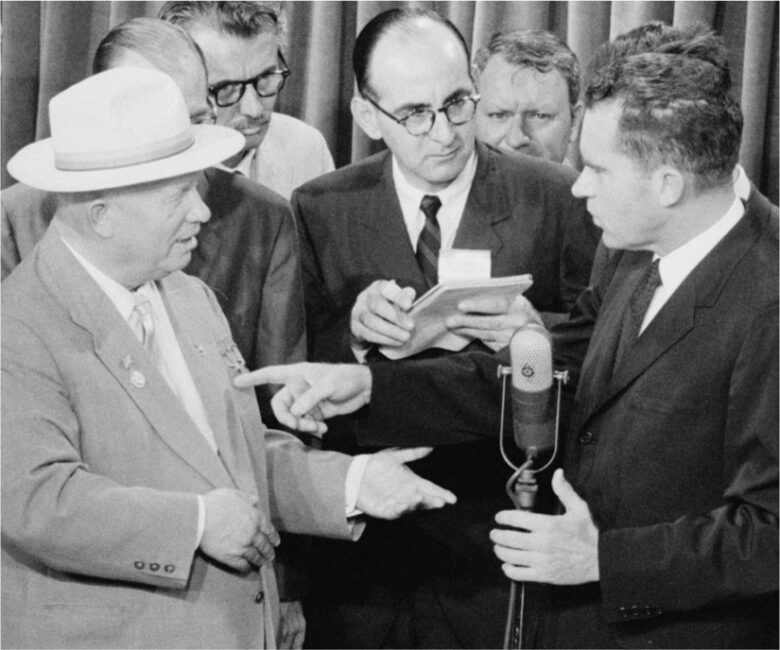 Use this narrative with the Richard Nixon, “Checkers” Speech, September 1952 Primary Source and the Kennedy vs. Nixon: TV and Politics Lesson to have students analyze the impact television made on the perception of politics in the 1950s and 1960s.

On July 24, 1959, at Sokolniki Park in Moscow, a remarkable exchange took place between two of the most powerful men in the world: Soviet Premier Nikita Khrushchev and U.S. Vice President Richard M. Nixon. Standing in a model of a typical U.S. home, the two leaders debated the relative merits of communism and capitalism, with video cameras capturing the event in color for rebroadcast in both the United States and the Soviet Union.

The “Kitchen Debate” had its origins in an agreement signed by Washington and Moscow the previous year. In it, each side pledged to construct an exhibit in the other’s country for the purpose of educating the population about what life was like in that country. The exercise was supposed to be part of a cultural exchange that would create mutual understanding and decrease Cold War tensions. A Soviet exhibit opened in New York in June 1959, and in the following month, Nixon traveled to the Soviet Union to be on hand for the opening of the U.S. exhibit in Moscow. That exhibit featured displays of consumer goods made by some 450 different companies, but the most memorable exchanges between Khrushchev and Nixon came in a model of a suburban home equipped with the latest modern conveniences, such as a dishwasher, refrigerator, and electric stove.

The encounter between the two men began in the Kremlin. Khrushchev hammered Nixon over a resolution just passed in the U.S. Congress recognizing the third week of July as “Captive Nations Week” and calling attention to the plight of the millions in Asia and Eastern Europe living under Communist rule. From there, the heated discussion continued at the exhibit, where Nixon took the opportunity to show off the standard of living available to ordinary Americans under capitalism. In the course of the so-called Kitchen Debate, the vice president emphasized that the model home and all the technological wonders within could be purchased for only approximately $14,000, well within the means of the average working family.

Khrushchev did not seem impressed. On the one hand, he appeared to question whether all the new devices were necessary, asking sarcastically whether American families had a machine that “puts food into the mouth and pushes it down.” He claimed that Soviet workers had access to products that were as good or better. Any Soviet citizen, he asserted, qualified for a house simply by being born in the U.S.S.R. Moreover, whereas U.S. builders designed homes to last no more than 20 years – so they “could sell new houses at the end” – Soviet homes were built “for our children and grandchildren.” Whatever they may lack now, Khrushchev assured Nixon, they would have in the near future.

“This is what America is capable of,” he quipped, “and how long has she existed? 300 years? 150 years of independence and this is her level. We haven’t quite reached 42 years, and in another 7 years, we’ll be at the level of America, and after that we’ll go farther. As we pass you by, we’ll wave ‘hi’ to you, and then if you want, we’ll stop and say, ‘please come along behind us'”.

Undoubtedly, the exchange between Khrushchev and Nixon became testy at times, but in many ways, the debate represented a healthy development in U.S.-Soviet relations. Each thought he had accurately portrayed the strength of the system he represented and won the debate. Before parting company, the two men agreed that their conversation would be aired on television in both countries, with their words translated into one another’s languages. Afterward, Nixon and Khrushchev headed to the Soviet leader’s personal residence, where they continued their discussions for another five hours, though the nature of those conversations was never made public. Building on the spirit of relative harmony, in September, Khrushchev became the first Soviet premier to visit the United States. He spent 12 days touring the country and meeting with President Eisenhower as well as other U.S. political figures, business leaders, and even celebrities, such as the singer Frank Sinatra and the actors Elizabeth Taylor and Marilyn Monroe.

That the debate occurred at all was noteworthy in itself. It certainly would never have been possible just a few years earlier, when Joseph Stalin ruled the Soviet Union and U.S. forces were fighting against Soviet-backed Chinese and North Korean troops in Korea. But it was also striking that in their conversation, neither man sought to prove the superiority of his social system by pointing to numbers or types of weapons systems such as bombers or tanks, or the amount of land under his respective government’s control. Instead, each leader insisted that his country’s way of life was better able to provide for the well-being of ordinary citizens.

The Kitchen Debate was aired on U.S. television on July 25 and on Soviet television two days later (although it was shown late at night in the Soviet Union, and with Nixon’s comments only partially translated). The reaction in the United States was mixed. The New York Times dismissed it as little more than a political stunt by Nixon. However, it is likely that it gave a boost to Nixon’s popularity, making him a more credible contender for the Republican nomination in the upcoming presidential election. As Time magazine put it, “Nixon was getting through to the Russian people with a message that told of a man, a system, and a country dedicated not to war, as Communist propaganda had insisted, but to prosperity and peace.” Most importantly, however, the debate demonstrated that the Cold War had moved into a new phase, one characterized less by the threat of looming military conflict between the United States and the Soviet Union, and more by a contest to win over the people of the developing world.

1. The discussions between Nixon and Khrushchev in July 1959 are often referred to as the “Kitchen Debate” because they

2. The main purpose of Nixon’s visit to the Soviet Union in July 1959 was

3. The primary focus of Nixon’s discussions with Khrushchev in July 1959 was

4. At the start of the “debate” with Vice President Richard Nixon, Nikita Khrushchev expressed his anger at

5. In the ongoing debate between Nixon and Khrushchev, the main topic of conversation was the superiority of each side’s

6. The American press concluded that a major outcome of the Kitchen Debate was that the Cold War was becoming more of a(n)

“But the day was highlighted by the sharp informal exchanges that took place between Mr. Nixon and Mr. Khrushchev.

The exchanges started in Mr. Khrushchev’s quiet offices in the Presidium Building of the Kremlin. They reached a high point in an hour-long debate in the kitchen of a model house at the exhibition, and they wound up with laughs, finger-shakings and more argument at the formal opening of the exhibition.

But both agreed that each nation wants peace.

Mr. Nixon appealed to Mr. Khrushchev not to let the Big Four Geneva conference of foreign ministers on Germany end in failure. He said it was now stalemated and that a way must be found to get it moving toward a solution.

Mr. Khrushchev and Mr. Nixon debated with strong words and forceful arguments. But their talk was straightforward and there was no hint of ill feeling in their fast and furious interchanges.”

Harrison E. Salisbury, “Nixon and Khrushchev Argue In Public As U.S. Exhibit Opens; Accuse Each Other Of Threats”

1. This excerpt can be placed in which of the following contexts?

2. A source of tension between the United States and Soviet Union that immediately preceded the event described in the excerpt was the

3. How do the sentiments about U.S. foreign policy in the 1950s expressed in the excerpt compare with those in the late nineteenth century?