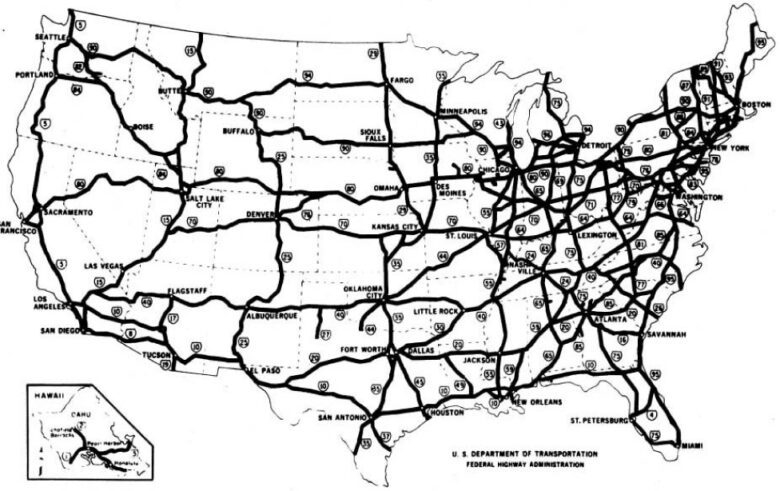 Use this narrative with the Nam Paik, Electronic Superhighway, 1995 Primary Source to analyze the impact that interstate highways and infrastructure improvements had on the United States.

In June 1956, President Dwight Eisenhower signed into law the National Defense Highway Act, the largest public works project in American history. The Act envisioned a network of interstate highways modeled on the German autobahn, which was constructed by the Nazis before World War II to employ workers idled during the Great Depression. Eisenhower had seen the road network in Germany after the war and proposed a similar multilane, divided highway system for America in the 1950s.

The Highway Act had two goals: first, to develop and construct a network of highways as a mixed federal-state program that would provide transportation for Americans driving in their private automobiles, and second, to ease transportation for the military in the event of a major war, including the evacuation of urban areas if a dreaded nuclear exchange with the Soviet Union occurred. The act passed the Democratic Congress, whose members saw the potential for employment and economic growth the construction of the interstate system would bring. The impact of its construction (which took decades) was immense in transforming the American economy, travel, and culture.

The lack of first-rate highways in America at the turn of the twentieth century meant that in midwestern states like Iowa, rural road conditions were appalling. The problem led to the development of the Good-Roads Movement to lobby for the construction of hard-surfaced roads that could link rural areas with towns and cities. The states took the lead in constructing macadam-surfaced thoroughfares to allow farmers to get their crops to railroad terminals and to markets. Many cities had hard-surfaced roads made of bricks or paving stones, but the Good-Roads Movement offered a vision for a national highway network funded by states and federal aid. In 1916, Congress had passed the Federal Road Aid Act, which allowed the federal government to grant funds to the states to construct a national highway system (known today as U.S. highways). But World War I intervened and much of the construction was delayed until the 1920s, when automobiles and trucks became key transportation alternatives to the railroads.

The railroads initially supported the Good-Roads Movement because it enhanced the ability of farmers and shippers to get their goods to market. But by the 1920s, the rail industry was suffering the loss of passenger traffic to the automobile and of freight traffic to trucks. The industry suffered greatly as cars and trucks operated on government-subsidized highways that the railroads had helped pay for through taxes, which ate into their profitability and accelerated their decline. More than 15,000 miles of interurban lines, electrified railroads that developed in the early twentieth century for linking rural areas with towns, had been laid between 1900 and the 1920s. These trolley systems were destroyed by new competition from roads, and the vast majority were abandoned during the 1930s. Highways and cars gradually replaced railroads for suburban Americans commuting to work in the cities and for vacationers touring the country.

Lieutenant-Colonel Eisenhower gained first-hand experience with the inadequate highway system in America when he volunteered to participate in an Army-sponsored transcontinental motor convoy in 1919. The convoy departed Washington, DC, and took 62 days to reach San Francisco, suffering the same problems motorists had been suffering from for some time: inadequate roads, mud, washouts, inadequate bridges, and bad weather, dust, and storms. It certainly made an impact on the future president, as did his experience with the German autobahn system after the war.

During the 1930s, the Roosevelt administration had begun the construction of turnpikes and highways in several states as part of its public works projects designed to offer employment during the Depression. Various New Deal agencies, as well as the states, participated in building two-lane highways, completing the Lincoln Highway across the nation (U.S. 30) and building highways in eastern states like New York and Pennsylvania. The war delayed further construction of highways until Eisenhower saw it as a domestic priority in the 1950s.

States and cities moved in to take over construction where the federal government would not in the era between the New Deal and the 1950s. As the federal aid program embodied in the Federal Road Aid Act dwindled, it was primarily the states that constructed highways. Even cities stepped in, like Chicago, which floated $350 million in bonds to build 33 miles of road. More than 200,000 miles of highways had been constructed in America since the 1920s, but the suburbanization of the United States in the postwar era led to crowded roads, air pollution, and increased road accidents as the federal government refused to act because of the cost.

Finally, Eisenhower proposed a significant increase in spending to fund a superhighway system. His plan, revealed at a governor’s conference by Vice President Richard Nixon, proposed $50 billion in spending over 15 years. This significantly increased the federal budget, which was then $72 billion. Some 40,000 miles of highway were to be built across the country, funded by bonds. But high interest costs on the bonds, which accounted for as much as $11 billion of the total appropriated, led to a political debate in Congress regarding the funding. Senator Al Gore Sr. (D-TN) wanted the highways to be paid for without borrowing. On the other side were the engineers, contractors, and users of the highways, who supported Eisenhower’s plan. The impasse led to a resounding defeat of the original bill in the House and Senate in 1955. Frustrated, Eisenhower was ready to compromise to get a highway bill passed.

In 1956, the compromise was reached. The American Trucking Association agreed to pay a fee of $1.50 per 1,000 pounds of weight for use of the highways, but Congress whittled this down, favoring the truckers in the final bill. The grand compromise was reached in the House, where a financing plan called the Highway Trust Fund was created. Funded by a tax on gasoline and truck tires, which touched all users directly, the fund was to be a self-perpetuating machine that would not be accountable to anyone. Users paid for the highways every time they filled their tank, and highway contractors had an endless supply of funds without needing additional appropriations from Congress. With the Highway Trust Fund in place, Eisenhower signed the National Defense Highway Act, also called the Federal Aid Highway Act, in June 1956, appropriating $27 billion to cover the costs of initial construction.

Thousands of miles of roadways were constructed immediately, and the results were astounding. In urban areas, massive superhighways cut through and destroyed neighborhoods and housing, much of it in poor neighborhoods. In rural America, the new superhighways typically ran alongside major railroad rights of way, because those routes had been engineered already and proved the best path through the country. Bypassed were small towns and rural merchants, who saw their livelihoods decline, especially if their towns were not on the interstate system. New corporations, like McDonald’s, Holiday Inn, and Howard Johnson, provided restaurants and hotels for interstate travelers that did not require them to venture away from the road. Americans had already embraced the automobile, but in the suburbs, it now became virtually the only way to get anywhere. Taking advantage of this, developers created the suburban shopping mall, usually at the intersection of major highways. Urban shopping declined as department stores and other major retailers were increasingly found in the booming suburbs.

Travel by rail also declined as fewer Americans rode trains, despite the railroad industry’s efforts to attract patrons with sleek stainless-steel carriages. By the early 1960s, train passengers had declined to 5 percent of the traveling public, yet railroads were not allowed to abandon their trains easily (government subsidies for airports and passenger air travel also took their toll on the railroads). The two largest passenger haulers, the Pennsylvania Railroad and the New York Central Railroad, experienced a combined deficit of $500 million by the late 1950s. Soon, all the railroad companies had abandoned passenger trains, leading to the creation in 1971 of Amtrak, a quasi-public, government-subsidized corporation meant to take over the burden of long-haul passenger operations from the suffering railroads.

In major urban areas, superhighways allowed for an exodus to the suburbs of whites who commuted to city jobs by driving along large, multilane expressways. Interstate highways even led the Brooklyn Dodgers and New York Giants baseball clubs to move to the west coast by 1957, because their stadiums, in crowded urban areas, could not be reached easily by fans who had moved out of the cities. But the new stadiums constructed at Chavez Ravine in Los Angeles (Dodgers) and Candlestick Park in San Francisco (Giants) had ample parking for automobiles.

Certainly, the interstate system proved a major developmental project, but its construction and the nation’s increasing dependence on the automobile had unintended consequences over the next half century. The debate over highways still influences public policy regarding America’s transportation systems today.

1. The Interstate Highway Act was originally to be funded with $50 billion paid for by

2. The motivation for the Democratic-controlled Congress to overwhelmingly pass a Republican president’s plan for a national highway system in 1956 was

3. Interurbans could be best described as

4. The Interstate Highway System affected the American economy in the same manner as which nineteenth-century feature?

5. Eisenhower’s creation of the Interstate Highway System was similar to

6. The advent of American superhighways had an impact on all the following except

1. Which of the following statements most accurately reflects the road pattern in the provided map?

2. The routes on the provided map had a significant impact on which of the following?

3. The routes on the provided map were created in the context of

Eisenhower Statement Upon Signing the Highway Act of 1958. https://www.presidency.ucsb.edu/documents/statement-the-president-upon-signing-federal-highway-act-1958

Goddard, Stephen B. Getting There: The Epic Struggle Between Road and Rail in the 20th Century. Chicago: The University of Chicago Press, 1994.
Rose, Hark H. Interstate: Express Highway Politics, 1941-1956. Lawrence, KS: University Press of Kansas, 1979.