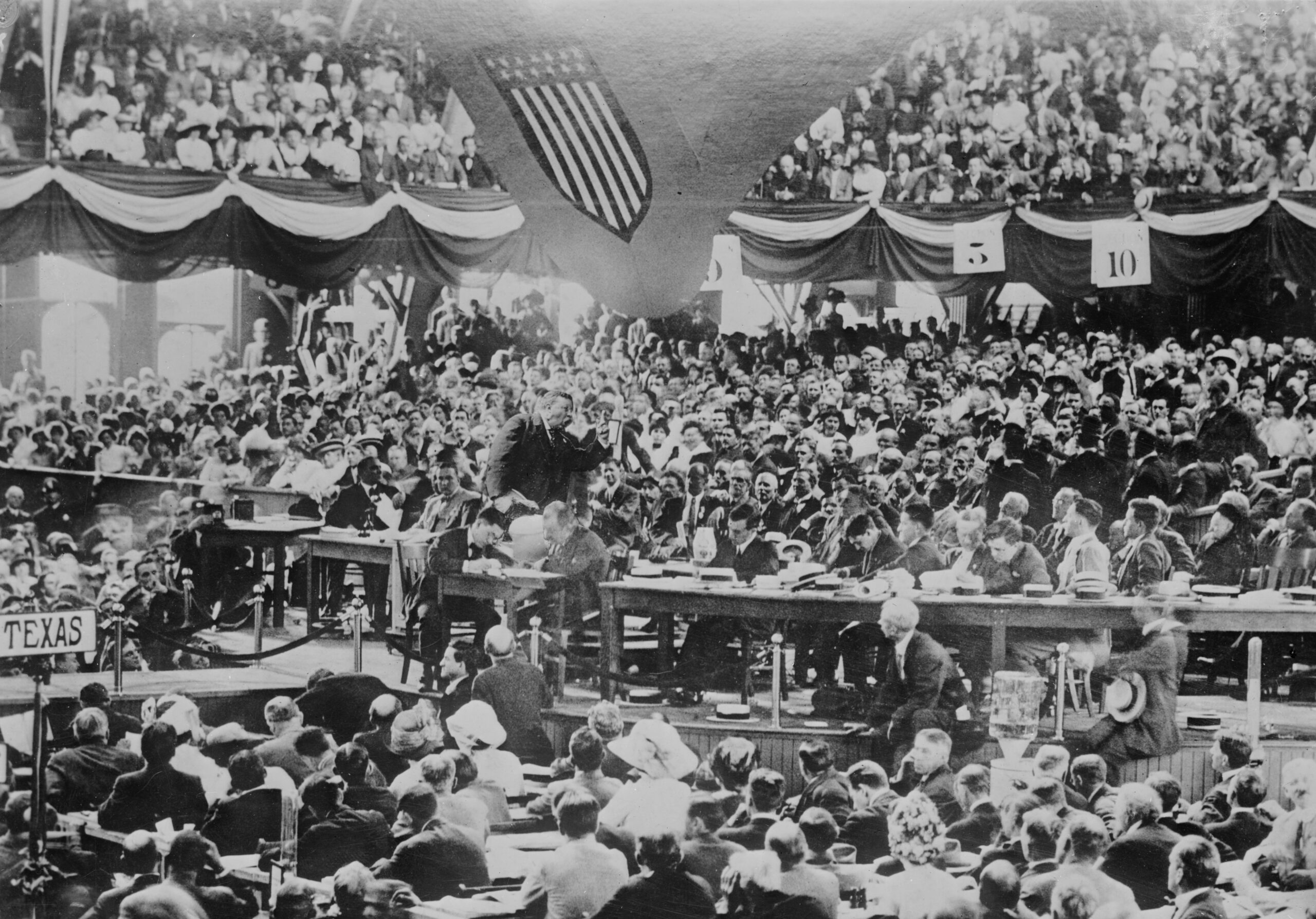 Written by: Joseph Postell, University of Colorado – at Colorado Springs

Use this Decision Point before the Wilsonian Progressivism Narrative to allow students to explore how Wilson became president and the friction between the political parties during the early twentieth century.

The 1912 presidential election offered the nation not two but four candidates with competing visions for addressing the nation’s growing problems. Each candidate had to decide whether to enter the race and how to articulate a vision for a nation beset by rapid social and economic changes brought about by industrialization, urbanization, and immigration. The candidates also had to present their idea of the proper government response. They had to consider America’s strategic and economic policies as a growing world power. Their contending visions offered American voters an opportunity to select what they thought was the best path forward.

Former president Theodore Roosevelt climbed into the open-air automobile that would take him to give one of his final speeches at the tail end of a long, grueling campaign. Although he had declined to run for another term in office in 1908, he was back now, four years later, seeking election to the most powerful office in the land.

As the car made its way to the Milwaukee Auditorium, a shot suddenly rang out. It was fired from a revolver just a few feet away, and Roosevelt knew immediately he had been hit. Reaching into his coat, he felt the bullet hole in his side. But after coughing into his hands several times and seeing no blood, he guessed the wound was not fatal. Although a doctor told Roosevelt’s driver to take him to the hospital, Roosevelt demanded to be taken to the auditorium to give his speech.

“I don’t know whether you fully understand that I have just been shot; but it takes more than that to kill a Bull Moose,” Roosevelt said to the crowd upon his arrival. He pulled his speech from his coat pocket. The 50-page remarks had been pierced by a ragged bullet hole. Roosevelt told the crowd (accurately) that the folded speech “probably saved me from [the bullet] going into my heart. The bullet is in me now, so that I cannot make a very long speech, but I will try my best.”

Approximately an hour and a half later, Roosevelt concluded his speech. He had periodically opened his coat to reveal his bloody shirt to the audience. Already a legendary political figure, he captivated the nation with this act. His performance also punctuated one of the most unpredictable, and important, presidential elections of the twentieth century.

In addition to Roosevelt, William Howard Taft, the sitting president, was running for reelection. Taft was once Roosevelt’s good friend (and his secretary of War), but the relationship had gone sour. Both men were Republicans, and when Roosevelt announced he would run for president in 1912, attempting to wrest the GOP nomination from Taft, it threatened to tear both their friendship and the party apart. The Republican Party was the home of both conservatives and progressives, and each group now had a candidate, with Taft representing the conservatives and Roosevelt the progressives.

Democrats also had a challenge selecting their nominee in 1912. Champ Clark, who had become speaker of the House after the Democratic takeover of that branch in the 1910 elections, appeared to be the frontrunner for the nomination, but William Jennings Bryan threw his support to Woodrow Wilson at the last hour, and on the forty-sixth ballot, Wilson was selected as the nominee. Meanwhile, the Socialist Party, a relatively small party concentrated in the Midwest, nominated Eugene Debs. The Socialist Party platform called for the nationalization of railroads, telephones, and all other means of transportation and communication.

The election focused on two issues that would define American politics for decades. The first issue, fought between Taft and Roosevelt, was whether political party organizations should have the power to decide who their candidates would be, or whether the party’s voters should make that decision. Taft was supported by the Republican Party officials, many of whom were unpledged delegates free to vote for any presidential candidate at the party’s national convention. Roosevelt, on the other hand, took his case directly to the voters, winning primary elections against Taft in Illinois, in California, and even in Taft’s home state of Ohio. Roosevelt won most of the pledged delegates, who were required to then vote for the winner of their state’s primary at the party convention.

The nomination battle was tight. At the Republican convention in Chicago, the delegates were to decide whether Taft or Roosevelt delegates were to be recognized in Alabama, Arizona, and California, determining the outcome of the convention. Elihu Root, once Roosevelt’s closest advisor, presided over the convention, but he engineered a victory for Taft, believing that protecting the party was more important than nominating his former friend. As Root argued in a speech at the convention (with his podium surrounded by barbed wire to protect him from Roosevelt supporters), the nomination contest was a “test of a party’s fitness to govern.” This test depended “upon the loyalty of party members to the party itself, to the great organization whose agency in government they believe to be for the best interests of the nation.” Roosevelt, by going directly to the voters, sought to undermine party loyalty to Taft, the sitting president. Therefore, Root unapologetically supported Taft and helped him win the nomination.

Taft may have won the battle, but Roosevelt won the war. He ordered his supporters to leave the convention and form their own party, the Progressive Party. (It is often called the Bull Moose Party because of Roosevelt’s nickname.) The Progressive Party, of course, nominated Roosevelt, who accepted the nomination in a speech famous for his declaration that “We stand at Armageddon, and we battle for the Lord.” The Progressive Party Convention resembled a religious revival more than a party convention. Gospel hymns were sung in which Jesus’s name was replaced by Roosevelt’s. When Roosevelt arrived to accept the nomination, he was greeted by a 55-minute standing ovation.

Although he did not win the Republican nomination, Roosevelt had struck a blow against the idea that parties should nominate their candidates, rather than voters selecting them through primaries. As Hebert Croly, a journalist and Roosevelt supporter, later explained, “by popularizing the mechanism of partisan government the state has thrust a sword into the vitals of its former master.” “The really important question,” he argued, “is whether progressivism. . . will not destroy the two-party system itself, and substitute for it a more satisfactory method of organizing majority rule.” Indeed, Taft was backed by the establishment of the Republican party, and Roosevelt ran for the Progressive Party, which was created primarily for the purpose of advancing a single candidate in a single election.

With Taft mostly out of the picture, Roosevelt could focus on Wilson, the Democratic nominee. And the contest between them revealed the second major issue resolved in 1912: what to do about the trusts. Trusts were large combinations of companies in related industries that threatened to eliminate competition and establish monopolies over major parts of the economy, from railroads to steel production. These combinations acted like monopolies when they conspired to manipulate prices, undercut their competitors to knock them out of the market, then raise prices when competition was gone, to increase profits.

Woodrow Wilson, in a campaign he called the “New Freedom,” insisted on the breakup of monopolies to restore competition. There was already a law on the books, the Sherman Antitrust Act, that forbade combinations in restraint of trade, and Wilson wanted to enforce this law to restore competition and weaken corporate power. Theodore Roosevelt took the opposite position in his “New Nationalism” campaign. He distinguished between good trusts and bad trusts; in his view, not all trusts should be broken up. Most of them, he argued, should be subjected to governmental control rather than eliminated. A powerful administrative commission, he believed, could keep these trusts in place but make sure they worked for the good of the people. The New Nationalism called for increased government control of the economy, whereas the New Freedom took a more traditional approach, seeking to restore competition rather than relying on government control.

Once again, however, Theodore Roosevelt lost the battle but won the war: When Woodrow Wilson entered office, he governed according to the principles of the New Nationalism, not his own New Freedom. He worked with Congress to enact laws establishing the Federal Reserve and the Federal Trade Commission, placing the economy under the kind of government control envisioned by Roosevelt rather than breaking up monopolies and relying on competition.

The 1912 election, therefore, influenced American politics for decades after its conclusion. Although he did not win the presidency, and did not even win his own party’s nomination for president, Theodore Roosevelt had a much greater impact in defeat than his competitor had in victory. Roosevelt weakened party power, laying the groundwork for a shift to primary elections rather than nominating conventions. He made the case for greater government control of the economy, which Wilson opposed during the campaign but adopted while in office. Roosevelt’s Progressive Party paved the way for many progressive reforms that transformed government at the beginning of the twentieth century and beyond.

1. The 1912 United States presidential election was significant because

2. In the 1912 U.S. presidential election, the Socialist Party

3. A major Progressive Era criticism of trusts was that they

4. During the 1912 presidential campaign, Theodore Roosevelt’s view of trusts, compared with Woodrow Wilson’s, was

5. During the 1912 presidential campaign, Woodrow Wilson’s New Freedom called for

6. Which of the following statements best summarizes the outcome of the 1912 presidential election?

1. This political cartoon was created in response to

2. The events depicted in this cartoon most directly led to

3. A historian might use this image to support the contention that

Flehinger, Brett. The 1912 Election and the Power of Progressivism: A Brief History with Documents. Boston: Bedford, 2002.

Gould, Lewis. Four Hats in the Ring: The 1912 Election and the Birth of Modern American Politics. Lawrence, KS: University Press of Kansas, 2008.