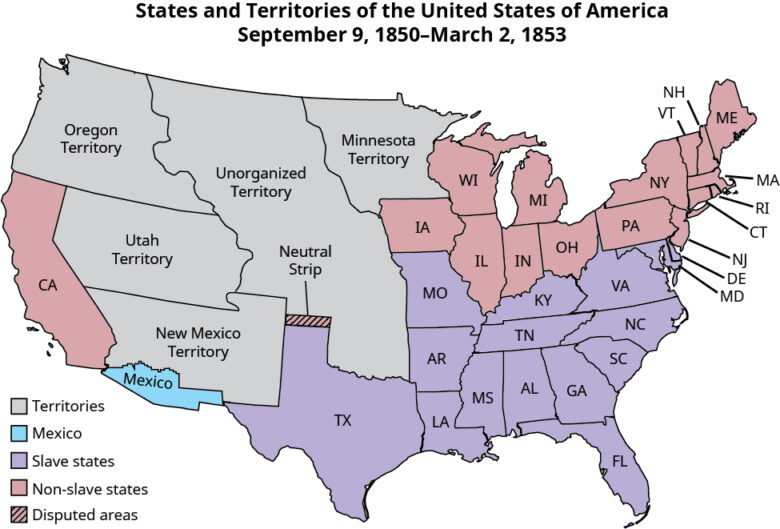 Use this Decision Point with the Thomas Sims and the Fugitive Slave Act of 1850 Narrative for a comprehensive look at the Compromise of 1850.

When the first session of the 31st Congress opened on December 3, 1849, 30 states were represented: 15 had slaves and 15 prohibited slavery. In the House of Representatives, members from free states outnumbered those from the South 140 to 91. The basis of representation in this Congress was the census of 1840. The enormous flow of European immigrants into the United States in the mid to late 1840s, especially into the North, meant that the next census, in 1850, would widen the already lopsided ratio of free- to slave-state representatives. This growing imbalance in the House heightened the importance to the South of parity in the Senate. That parity was immediately put at risk when President Zachary Taylor called for Congress to act favorably on the imminent application of California for statehood, and his notice that New Mexico would soon follow with its application. Both territories were certain to seek admission as free states. The South feared for its future with slavery if representation in the Senate became imbalanced.

In 1849, sectional division between the South and North was somewhat muted by the presence in each section of two national parties, the Democrats and the Whigs. The Whig President, Zachary Taylor, faced Democratic majorities in each chamber. Each party, however, had representatives and senators from both sections, providing a framework in which a compromise could be forged. But it was not to be easy. Leadership was important, and the 31st Senate had “the Great Triumvirate” of Henry Clay (a Whig representing Kentucky), John C. Calhoun (a Democrat representing South Carolina), and Daniel Webster (a Whig representing Massachusetts). All gave famous speeches at what proved to be the end of their senatorial careers (Calhoun died a few weeks after his speech was read for him; Clay and Webster died in 1852). The debates of 1850 also became a springboard for the national careers of two other Senate giants, William H. Seward of New York, a Whig; and Stephen A. Douglas, Democratic Senator of Illinois. Considering the issues of 1849–1850 from the perspectives of these five men reveals the complexity of the decision-making the national government faced.

The treaty that concluded the Mexican-American War in March 1848 ceded to the United States all of present-day California, Nevada, and Utah, most of Arizona, half of New Mexico, and portions of Colorado and Wyoming. In 1846, the controversial Wilmot Proviso would have prohibited slavery in all this territory. The Proviso passed the House but was defeated in the Senate, where the South had a one-delegate advantage from 1846 to 1848 and parity from 1848 to 1850. If only free states were carved out of the Mexican Cession, southern interests would be overwhelmed in both houses, and their champions, most influentially Calhoun, warned the South would withdraw from a Union that did not protect its interests. If free states had growing majorities in both the House and Senate, they might move to abolish slavery in the South. On the other hand, the North viewed parity as an evil precisely because it provided protection to slavery and gave southern states with smaller populations a significant measure of political equality with vastly larger northern ones.

California had been the big prize President James Polk craved from the Mexican-American War, though by 1848, only about 350 American settlers had traveled to the area. In his last annual message that December, however, Polk confirmed reports that gold had been discovered in California, and some 42,000 people rushed there in 1849, followed by more than 55,000 in 1850. This explosive migration was the reason President Taylor’s address in December 1849 called on Congress to approve California statehood.

After a month of intense debate, Senator Henry Clay offered eight resolutions: that (1) California be admitted without federal determination of the slavery question; (2) Congress not introduce slavery into New Mexico; (3) an imprecise boundary (that disadvantaged slave-owners) be established between New Mexico and Texas; (4) the federal government reimburse Texas for costs incurred in its war for independence and compensate it for territory relinquished to New Mexico; (5) it was inexpedient to abolish slavery in Washington, DC, while retaining it in Maryland unless the people there consented and the slaveholders were compensated; (6) it was expedient to ban the slave trade in the national capital; (7) more effective fugitive slave legislation be enacted; and (8) Congress had no power to abolish slavery in the states, which possessed exclusive authority over the question. Clay followed his resolutions a week later with a two-day speech explaining and defending his package as a comprehensive settlement of outstanding issues that should be voted on as a single bill, an omnibus.

During the first two weeks of March, Senators Calhoun, Webster, Seward, and Douglas delivered four of the most memorable speeches in Senate history. On March 4, Calhoun, too weak from tuberculosis to speak, sat while a colleague read his speech rejecting Clay’s compromise as sacrificing the sectional balance so essential to securing southern interests. “How can the Union be saved?” Calhoun asked in his speech. He called for a constitutional amendment that would preserve “the equilibrium” but did not specify how.

On March 7, Webster began famously, “I wish to speak to-day, not as a Massachusetts man, not as a northern man, but as an American, and a member of the Senate of the United States . . . I speak today for the preservation of the Union. Hear me for my cause.” He identified grievances of both sections but supported redressing the South’s complaint about runaway slaves with a strong Fugitive Slave Act, thereby incurring lasting condemnation in his own state, the epicenter of abolitionism.

On March 11, New York’s Senator Seward rose to oppose compromise of any kind. In a memorably controversial line, he sought to undercut the Constitutional protection for slavery: “But there is a higher law than the Constitution, which regulates our authority over the domain, and devotes it to the same noble purposes. The territory is a part—no inconsiderable part—of the common heritage of mankind, bestowed upon them by the Creator of the universe.”

On March 13 and 14, Stephen Douglas spoke as a moderate from the West. He applauded Clay’s omnibus bill for setting “the ball in motion to restore peace and harmony.” Responding both to Seward and Calhoun respectively, he insisted that the Constitution was the highest law in the land and emphasized that it took no notice of sections, only of states. Furthermore, he emphasized that state sovereignty, not congressional legislation, had worked to expand freedom and constrict slavery. States had always decided the issue, and it should be left to their determination in the future under a principle he later called “popular sovereignty.”

The need to reach a decision was heightened by the Calhoun-inspired Nashville Convention, a meeting of delegates from nine southern states that had been called to strategize resistance, including possible secession, if Congress banned slavery from the new territories. It met from June 3 to 12 and took a “wait and see” position regarding the proceedings in Washington, where in June alone, 16 U.S. Senators proposed 28 amendments to the omnibus bill. In the House, 58 members delivered one-hour speeches from May 8 to June 11. Prospects for the omnibus worsened when President Taylor became sick after eating at a hot July 4 celebration and died of severe gastroenteritis five days later. Finally, on July 31, each major section of the omnibus bill was voted down. Clay left Washington in despair.

Stephen Douglas now pushed to have each part of the bill considered separately. During the last two weeks of August, he managed bills through the Senate and then shifted his attention to the House, where he and a few colleagues worked the floor informally to gain support. Finally, on September 9, President Millard Fillmore signed this Compromise of 1850 into law. The compromise included California’s admission as a free state, the organization of New Mexico Territory with a boundary adjustment that required paying Texas $10 million, and the organization of the Utah Territory. New Mexico and Utah were organized into territories with no restrictions of slavery. On September 18 came the new Fugitive Slave Act, which allowed federal warrants to be used to arrest suspected fugitives, provided for federal marshals to capture fugitives, and punished anyone who obstructed the execution of the law. Two days later, another part of the compromise went into effect when Congress abolished the slave trade in Washington, DC. Many northerners thought the slave markets in the nation’s capital compromised the country’s principles and were an embarrassment to foreign visitors.

The Compromise of 1850 failed to settle the tensions that continued to divide the nation during the next decade and did not establish a principle that could be applied unequivocally to territories outside the Mexican Cession. Extremists in both sections were displeased with the Compromise. Over the next decade, the Fugitive Slave Act set off a firestorm of protest and mob violence in the north and caused significant sectional divisions. More sectional conflict resulted from the explosive Kansas-Nebraska Act of 1854, ironically also initiated by Douglas.

1. What did the South fear most if California and New Mexico were admitted as states?

3. Senators Henry Clay, John C. Calhoun, Daniel Webster, William H. Seward, and Stephen Douglas participated in what has been called the “golden age of the Senate” (1820–1850). Choose the reason that best explains why this period earned the name.

4. How did the Compromise of 1850 try to placate the South for the loss of sectional balance in the U.S. Senate?

5. That neither the Whigs nor the Democrats had a clear sectional majority in the 1840s allowed for

“And now the simple, bold, and even awful question which presents itself to us is this: Shall we, who are founding institutions, social and political, for countless millions; shall we, who know by experience the wise and the just, and are free to choose them, and to reject the erroneous and the unjust; shall we establish human bondage, or permit it by our sufferance to be established? Sir, our forefathers would not have hesitated an hour. They found slavery existing here, and they left it only because they could not remove it. There is not only no free state which would now establish it, but there is no slave state, which, if it had had the free alternative as we now have, would have founded slavery. Indeed, our revolutionary predecessors had precisely the same question before them in establishing an organic law under which the states of Ohio, Indiana, Michigan, Illinois, and Wisconsin, have since come into the Union, and they solemnly repudiated and excluded slavery from those states forever. I confess that the most alarming evidence of our degeneracy which has yet been given is found in the fact that we even debate such a question.”

1. This excerpt was written in response to

2. In establishing his argument, Seward refers to the legislative precedent established by the

3. Which event of the 1840s and 1850s would most strongly challenge the views expressed by Seward?

Waugh, John C. On the Brink of Civil War: The Compromise of 1850 and How It Changed the Course of American History. Wilmington, DE: Scholarly Resources, 2003.