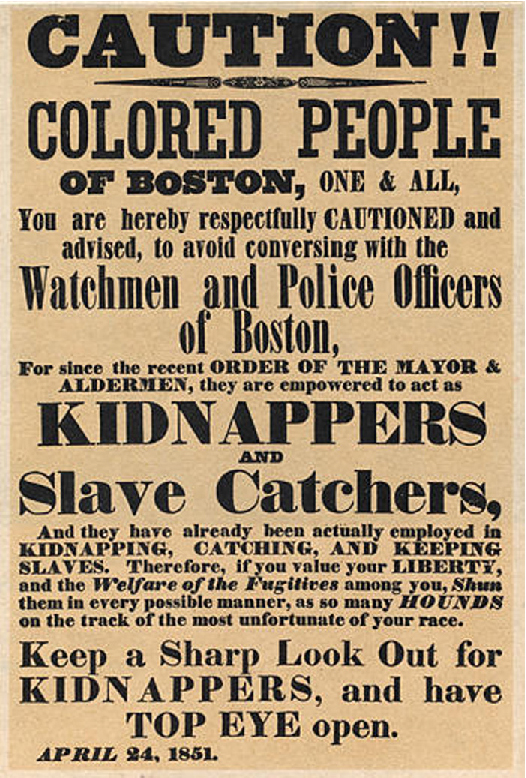 In the early morning dampness on Saturday, April 12, 1851, police and federal troops mustered near the weak light of a single gas lamp outside the courthouse in Boston’s city center. More than 100 police officers armed with double-edged Roman swords, plus another 100 volunteers wielding clubs, drilled for more than an hour, their heavy boots clomping upon the dirt-packed street. The police had practiced their formation for several days in preparation for what would happen in the next few minutes.

One of Boston’s most militant abolitionists, the fiery Unitarian minister Thomas Wentworth Higginson, described the chill he felt as he watched the troops “marching and countermarching, drawing their cutlasses, and forming up into a horrible hollow square.” Within that hollow square, the troops would soon escort a lone man to the ship that would carry him back to slavery. He was Thomas Sims, a 23-year-old runaway slave from Georgia whom the police had captured nine days earlier. In compliance with the recently strengthened Fugitive Slave Act, part of the controversial sectional Compromise of 1850, the antislavery city of Boston was returning Sims to bondage.

Boston had always taken pride in its instrumental role in the antislavery movement, but it was not until this embarrassing and shameful event of the city sending a free man in the North back to slavery that its abolitionists began to harden from philosophical opponents of slavery into relentless activists. The bitterness of Sims’s capture, the spectacle of his imprisonment, and their inability to prevent his return galvanized abolitionists and showed them a lesson no victory could teach. It was one that forever changed the slavery debate.

By the time Thomas Sims fled to Boston, the city had been home to a vocal antislavery movement for decades. Transcendentalist writers and Unitarian ministers were passionate abolitionists. Boston’s African American community had become increasingly active since the turn of the nineteenth century, especially through its churches. William Lloyd Garrison began publishing his antislavery newspaper, The Liberator, in 1831 and had continued without interruption for 20 years. Although a broad cross-section of Bostonians still rejected abolition as too radical, the city’s antislavery ardor took shape early.

In the wider nation, regional differences had reached a near-breaking point by 1850. California had just been admitted to the union as a free state, upsetting a fragile balance of 15 slave states and 15 free. Proslavery southerners, already whispering the word “secession,” had demanded concessions in return for a “free California” and forced the Compromise of 1850, whose main component was the toughened Fugitive Slave Act. This act expanded the powers of U.S. commissioners to enforce federal law and attempted to supersede the provisions of state law by requiring northern law enforcement and legal entities to assist slave hunters in the capture, detention, and return of runaways. It also denied accused fugitives a jury trial and the right to testify in their own defense. Boston’s abolitionists were furious about the law, which they viewed as one of the great miscarriages of justice in the country’s history. Many were members of the Boston Vigilance Committee, which helped to protect escaped enslaved persons from slave catchers and became especially active in the wake of the Fugitive Slave Act. They were just as outraged that their own senator, Daniel Webster, had played a key role in drafting it and vilified him for it. They feared free blacks as well as runaways would be swept up by the slave catchers and enslaved.

Only a few months before, in mid-February 1851, an escaped slave from Norfolk, Virginia, named Shadrach was captured and arrested in Boston. While he was being held at the courthouse, an angry crowd of mostly African Americans gathered to rescue him. They stormed the courthouse, recovered Shadrach, and helped him flee to Canada to elude the slave catchers.

Yet abolitionists did little more than watch after Sims was captured on April 3. Higginson, who demanded action to free Sims, was disgusted by his colleagues’ unwillingness to respond. He and a handful of others hastily devised a secret scheme that called for Sims to jump to freedom from his third-story jailhouse window onto a pile of thick mattresses below; however, the plot fizzled when authorities, apparently tipped off, ordered workers to install iron bars across the open window on the day of the scheduled escape. But beyond this, most Boston abolitionists took no concrete steps to free Sims. A chagrined Higginson decried their timidity; even Garrison seemed more concerned about “preparing next week’s editorial” than rescuing the man.

Legal efforts failed, too. A Massachusetts judge refused to rule the Fugitive Slave Act unconstitutional. Later, the court issued a certificate attesting that Sims was, indeed, the property of his Georgia slaveholder and identified the former enslaved man as chattel. Despite Sims’s protestations to his lawyer “I will not go back to slavery” the court ordered his return to Savannah.

At 4:15 a.m., as most of the city slept, police officers assembled in the hollow-square formation and marched silently to the east side of the courthouse. Despite the early hour, nearly 200 horrified spectators looked on as the door opened and a tearful Sims appeared. Abolitionists accompanied him and his armed guards down State Street toward the pier, hissing and shouting “Shame!” and “Infamy,” but one witness noted that, even at this point, “no other attempt at disorder was made.”

The entire mass arrived at Long Wharf, where the brig Acorn, its sails unfurled, glimmered in the dawn breaking across Boston Harbor. As Sims was led to Acorn’s deck, a man standing on the wharf cried out: “Sims! Preach liberty to the slaves!” With the last words he uttered in Boston, Sims returned a sharp rebuke to his captors: “And is this Massachusetts liberty?”

Within two minutes, at just after 5:00 a.m., the Acorn was moving toward open sea, transporting its human cargo back to Georgia. Boston abolitionists were further disheartened when they received word one week after the fugitive’s departure that, upon his arrival in Savannah, Sims was whipped with 39 lashes across his bare back in the public square, the penalty for running away. Former slave and prominent black abolitionist Frederick Douglass expressed his fury at the news: “Let the Heavens weep and Hell be merry!”

It did not take long for Sims’s dramatic capture to shift attitudes in Boston and throughout the North. On April 24, two weeks after Sims’s departure, the Massachusetts Legislature elected the vociferous antislavery candidate Charles M. Sumner to the Senate (senators were not yet elected directly by the people). Sumner became one of the country’s most influential abolitionist voices. At the same time, the Massachusetts Senate petitioned Congress (unsuccessfully) to repeal the Fugitive Slave Act, calling it “unconstitutional, inhumane, and wicked.”

In the three years after Sims’s return to bondage, Boston abolitionists, still ashamed of the city’s actions, helped more than 300 fugitive slaves avoid recapture, providing them with warnings about kidnappers, as well as money, food, clothing, alibis, and safe passage along the Underground Railroad network.

Boston’s renowned literary community, including Ralph Waldo Emerson, Henry David Thoreau, Herman Melville, Nathaniel Hawthorne, Henry Wadsworth Longfellow, Louisa May Alcott, among others, also turned their energies to the cause. Emerson, especially, regretted Boston’s official behavior in the Sims case: “The reverse of what it should have been . . . it should have placed obstruction at every step,” he wrote. In 1852, with the Sims case fresh in his mind, Boston publisher John Jewett released Harriet Beecher Stowe’s novel Uncle Tom’s Cabin in book form. The then-controversial work became the nation’s greatest literary phenomenon of the nineteenth century and profoundly shaped antislavery attitudes in the North.

Boston’s efforts inspired courageous abolitionists in New York, Rhode Island, Pennsylvania, and Ohio to work tirelessly and assume great risk for the antislavery cause. The Sims affair also influenced widespread northern reaction to later events in Boston. In 1854, the city sent its second fugitive slave back to bondage. This time, Higginson and a group of men smashed courthouse doors with axes and stabbed a federal marshal to death in a daring, though unsuccessful, attempt to free runaway Anthony Burns; afterward, as Burns was led away, more than 50,000 Bostonians jammed streets and rooftops in full-throated protest. Things were never the same in Boston or America after the day in 1851 when a hollow square of armed guards marched Thomas Sims back to bondage, an act that ignited a national movement.

1. A strengthened Fugitive Slave Act was one component of the

2. A vocal antislavery movement developed in Boston because

3. Passage of the Fugitive Slave Act in 1850 resulted in

4. What impact did the passage of the Fugitive Slave Act have on escaped enslaved persons and free blacks in the North?

5. Immediate response to the passage of the Fugitive Slave Act included

6. Changes to the provisions of the Fugitive Slave Act in 1850 were designed to

“Sect. 15. Any sheriff, deputy sheriff, jailer, coroner, constable or other officer of this Commonwealth, or the police of any city or town, or any district, county, city or town officer, or any officer or other member of the volunteer militia of this Commonwealth, who shall hereafter arrest, imprison, detain or return, or aid in arresting, imprisoning, detaining or returning, any person for the reason that he is claimed or adjudged to be a fugitive from service or labor, shall be punished by fine not less than one thousand, and not exceeding two thousand dollars, and by imprisonment in the State Prison for not less than one, nor more than two, years.

Sect. 16. The volunteer militia of this Commonwealth shall not act in any manner in the seizure, detention or rendition of any person for the reason that he is claimed or adjudged to be a fugitive from service or labor. . . .

Sect. 19. No jail, prison, or other place of confinement belonging to, or used by, either the Commonwealth of Massachusetts or any county therein, shall be used for the detention or imprisonment of any person accused or convicted of any offence created by either of the said acts of congress mentioned . . .”

Chap. 0489 An Act to protect the Rights and Liberties of the People of the Commonwealth of Massachusetts, 1855

1. What was a direct result of the provisions of the act in the excerpt

2. This act was written in response to

3. The passage of the act most directly reflects which continuity in American history?

Emerson, RW. The Complete Works of Ralph Waldo Emerson, Volume 2. Edited by Edward Waldo Emerson. Cambridge, MA: Riverside Press, 1904. See Emerson’s May 3, 1851, speech entitled “Address to the Citizens of Concord on the Fugitive Slave Law,” in which he castigated Boston citizens for permitting the arrest of Sims.

Massachusetts Senate no. 51: General court. Joint Special Committee. “Joint Special Committee on So Much of the Governor’s Address as Relates to Slavery and on Petitions Praying to the Legislators to Instruct Their Senators and to Request Representatives in Congress to Endeavor to Procure a Repeal of the Fugitive Slave Law.” March 24, 1851. https://babel.hathitrust.org/cgi/pt?id=loc.ark:/13960/t89g5rc9w

Delbanco, Andrew. The War Before the War: Fugitive Slaves and the Struggle for America’s Soul from the Revolution to the Civil War. New York: Penguin, 2018.