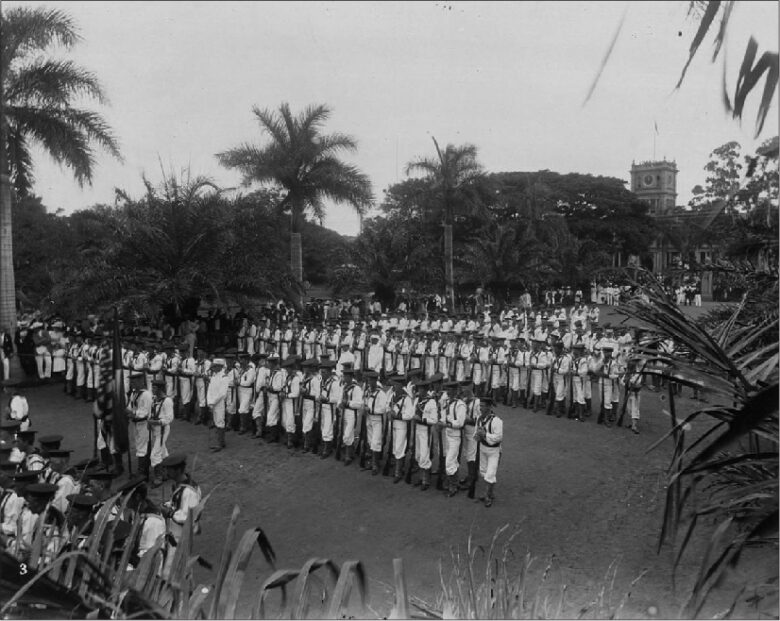 This Narrative can be used along with The Annexation of Hawaii DBQ Lesson to show how American policymakers and businesses looked outside U.S. borders to continue expanding American influence.

American and British missionaries came to Hawaii as early as the 1820s to convert the Hawaiians to Christianity. They reported back in glowing terms about the climate’s ideal conditions for planting sugar cane and attracted business investors who acquired large tracts of land. These investors replaced traditional Hawaiian agricultural practices with a plantation economy based on capitalist systems of private land ownership, taxation, and wage labor. Discussions about the possible annexation of Hawaii to the United States began in the 1850s during the rule of King Kamehameha III, when Hawaii’s whaling and sugar industries became increasingly tied to U.S. trade. King Kamehameha III was willing to support annexation to bring political stability, but after his death in 1854, his nephew and successor, Alexander Liholiho, halted the effort. The United States, then distracted by sectional tensions and then the Civil War, put the prospect on hold. By the 1870s, American business interests dominated Hawaii’s sugar industry, and this powerful planter class exerted great influence over the weakened native monarchy.

In 1875, the Hawaiian economy became even more intertwined with the U.S. economy when the U.S. and Hawaiian governments signed a reciprocity agreement that gave Hawaii duty-free access to export certain products, like sugar, to the United States. In return, Hawaii’s sugar industry had to serve American markets only, a policy that had the effect of making Hawaii economically dependent on U.S. trade. By 1890, Hawaii was shipping 99 percent of its exports to the U.S. mainland and receiving 76 percent of its imports from the United States.

The reciprocity agreement gave American sugar planters in Hawaii an economic advantage over other sugar-producing countries so they could corner the U.S. market; to preserve this special status, they had to ensure the monarchy continued to facilitate economic ties to the United States. In 1888, the planter elite pressured the Hawaiian government, then headed by King David Kalakaua, to pass a new constitution that limited monarchical authority and established property qualifications for voting. This new constitution preserved political power in the hands of the land-owning planter class and denied suffrage to native Hawaiians, as well as to the large Chinese and Japanese immigrant population laboring in the sugar fields. The monarch had little choice because the American planters controlled the legislature.

In 1890, Congress passed the McKinley Tariff, which annulled the exclusive reciprocity arrangement between the United States and Hawaii. It undermined Hawaii’s special status by allowing other nations and territories, like Cuba, to export sugar to the United States without paying duties. Hawaii no longer retained an edge over other sugar-producing states, which led to an immediate drop in the price of sugar and gave Hawaiian sugar interests added incentive to press for annexation. Not long after, in 1891, King Kalakaua died and his sister, Queen Liliuokalani, took the throne. The Queen, a Christian woman fluent in English, was determined to break Hawaii’s economic dependence on the United States and restore the political rights of native Hawaiians. She took immediate steps toward establishing a new constitution. Not surprisingly, the planter elite perceived the Queen as a threat to their political and economic ascendancy. They decided she had to be deposed.

In January 1893, a group of these elite businessmen in Hawaii, most of whom were Americans, overthrew Queen Liliuokalani’s regime with the support of the U.S. government. The U.S. minister to Hawaii, John L. Stevens, landed an American warship, the U.S.S. Boston, along the shore at the time of the coup. Fearing an invasion, the Queen abdicated her throne, and Sanford B. Dole, the son of Protestant missionaries in Hawaii, set up a provisional government. Dole assumed the presidency of the new republic of Hawaii and made an immediate appeal to U.S. President Benjamin Harrison for annexation.

It was February 1893, toward the latter part of Harrison’s term, when the annexation treaty came before the Senate, but it did not come up for a vote. Grover Cleveland, Harrison’s successor, soon took office. Believing that Queen Liliuokalani had been unjustly deposed, President Cleveland withdrew the treaty from Senate consideration. So far, political conditions were not yet favorable for Hawaiian annexation to pass.

This was not the first time the United States had tried to annex Hawaii and failed. President Franklin Pierce and Secretary of State William H. Seward (serving under President Andrew Johnson) had tried to secure annexation in 1854 and 1867, respectively. In both cases, there was not enough support for the measure to pass.

Between 1893 and 1898, the nation fiercely debated Hawaiian annexation. Those in favor argued that Hawaii was ideally located as a gateway to Eastern markets and could provide rich commercial advantages. They also recognized the strategic importance of Pearl Harbor, which could serve as a military outpost and coaling station for merchant ships in the Pacific. Critics of annexation, including President Cleveland who thought it unwise and immoral, denounced the sugar interests for their plot to depose the Queen and reproached Minister Stevens for making the U.S. government a conspirator in the coup. Because Hawaii was not part of the continental United States, some anti-annexationists saw the taking of this overseas territory as a departure from the progress of westward expansion and a violation of American principles. They raised concerns about the constitutionality of annexation and argued that the United States could have a thriving trade with Hawaii and secure access to Pearl Harbor without the burdens of official annexation.

Racist perceptions of the Hawaiian people further motivated the opposing side. They feared annexation would give native Hawaiians, along with the islands’ sizable Chinese and Japanese immigrant population, a pathway to American citizenship. Over the course of the nineteenth century, the native Hawaiian population had been decimated by disease, dropping from more than 130,000 in 1832 to fewer than 35,000 by 1890. The resulting labor shortage created incentives for workers from Japan and China, derogatively called coolie laborers, to immigrate to Hawaii, soon becoming the second-and third-largest ethnic groups, respectively, in the islands. Antipathy toward Chinese and Japanese immigrants in the United States had led to the passage of stringent exclusionary policies to prevent their arrival in the mainland. Hawaiian annexation, however, raised the prospect of undermining those restrictions. As a result, language was written into the annexation treaties that came before the Senate prohibiting future immigration from East Asia into Hawaii, to ease concerns about an increasing Asian presence in the United States.

When President William McKinley took office in 1896, he officially endorsed Hawaiian annexation in his presidential platform. He also pressed for a revision of the tariff policy and favored the idea of resuming the earlier reciprocity arrangement. Members of the sugar trust, particularly the Western Sugar Refining Company of San Francisco, felt threatened by McKinley’s willingness to grant tax advantages to Hawaiian sugar interests, fearing it might endanger their sugar monopoly in the United States. Despite their opposition, however, McKinley resubmitted the annexation treaty to the Senate on January 16, 1897. Unable to achieve the necessary two-thirds majority to pass it, pro-annexationist Senators tried to bypass the constitutional requirement by getting the treaty passed through joint resolution, which required only a simple majority from both the Senate and the House of Representatives. Even with this tactical move, the joint resolution did not have enough support. The annexation of Hawaii had failed yet again.

What ultimately tipped the balance in favor of annexation was the Spanish-American War of 1898. Immediately after Admiral George Dewey defeated the Spanish fleet in the first major naval engagement of the war, the Battle of Manila Bay in the Philippines, annexationists resubmitted the joint resolution that had been pending since 1897. President McKinley lobbied Congress to pass it, calling annexation a necessary war measure and claiming the U.S. military would greatly benefit from using Hawaii as a coaling station and naval base in its fight against the Spanish Navy in the Pacific. On June 15, 1898, the House passed the resolution by a vote of 209 to 91; three weeks later, the Senate passed it by vote of 42 to 21. Annexation had finally succeeded, passed by a joint resolution rather than by treaty.

In signing the joint resolution, President McKinley did not ask for the consent of the Hawaiian people, nor did he compensate Queen Liliuokalani in any way. Annexation was a critical part of his larger vision to expand U.S. influence overseas. Along with Hawaii, upon victory in the war, McKinley acquired from Spain the nation’s first colonial acquisitions: Cuba, Puerto Rico, Guam, and the Philippines.

Dole’s government arrested the Queen in 1895 for having knowledge of treasonous activity against his regime, and she was placed on house arrest. With the passage of Hawaiian annexation in 1898, her control of the throne was permanently lost, and Hawaii became a U.S. territory. After a referendum in which 93% of Hawaii voters supported statehood, Hawaii became the fiftieth U.S. state in 1959.

1. What became the crucial justification for finalizing Hawaiian annexation?

2. Under which U.S. president did the annexation of Hawaii occur?

3. All the following were reasons some Americans opposed Hawaiian annexation except

4. When Americans first began to visit and then settle in Hawaii, their main motivation was to

5. The ruling Hawaiian monarch who was receptive to American annexation of the islands was

6. In addition to the fact that Hawaii had a climate conducive to growing a profitable sugar crop, a major argument put forth by American businesspeople (who lived in Hawai’i) for annexation was that

I, Liliuokalani of Hawaii, by the will of God named heir apparent on the tenth day of April, A.D. 1877, and by the grace of God Queen of the Hawaiian Islands on the seventeenth day of January, A.D. 1893, do hereby protest against the ratification of a certain treaty, which, so I am informed, has been signed at Washington by Messrs. Hatch, Thurston, and Kinney, purporting to cede those Islands to the territory and dominion of the United States. I declare such a treaty to be an act of wrong toward the native and part-native people of Hawaii, an invasion of the rights of the ruling chiefs, in violation of international rights both toward my people and toward friendly nations with whom they have made treaties, the perpetuation of the fraud whereby the constitutional government was overthrown, and, finally, an act of gross injustice to me. . . .

Because said treaty ignores, not only the civic rights of my people, but, further, the hereditary property of their chiefs. Of the 4,000,000 acres composing the territory said treaty offers to annex, 1,000,000 or 915,000 acres has in no way been heretofore recognized as other than the private property of the constitutional monarch, subject to a control in no way differing from other items of a private estate.

Queen Liliuokalani of Hawai’i, Official Protest to the Treaty of Annexation, June 17, 1897

1. Queen Liliuokalani’s protest claims violation of all the following rights except

2. Queen Liliuokalani’s main argument is based upon the fact that

3. With respect to its goals and political and economic debates, annexation of Hawaii was most similar to what other event?

4. The annexation of Hawaii is most closely associated with the

Miller, Bonnie M. From Liberation to Conquest: The Visual and Popular Cultures of the Spanish American War of 1898. Amherst, MA: University of Massachusetts Press, 2011.