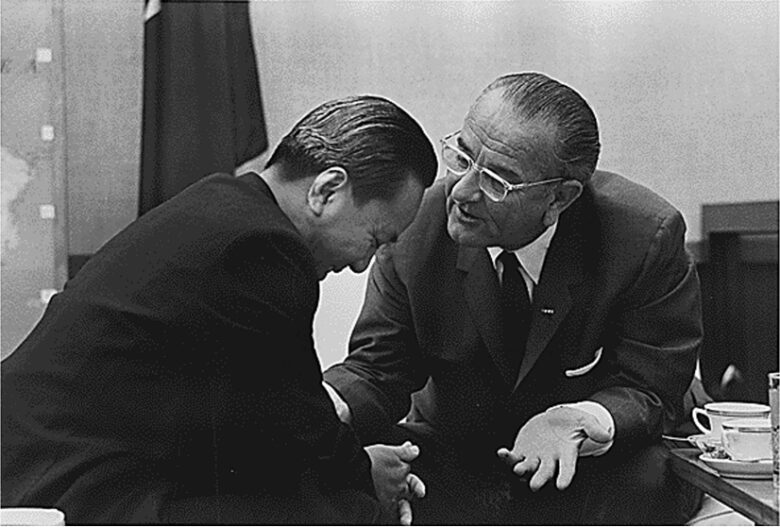 Use this decision point after discussion of the Vietnam War and its unpopularity to discuss how it affected the presidential election in 1968 and LBJ’s decision not to run in the election.

As 1968 dawned, President Lyndon B. Johnson had every expectation that, notwithstanding the growing unpopularity of the Vietnam War, he would easily receive the Democratic Party’s nomination that summer to serve a second four-year term and then cruise to re-election against his Republican opponent in November. He had pushed through his ambitious legislative agenda to create a “Great Society” at the beginning of his term. He had presided over a booming economy, due to a large 1964 tax cut for businesses and taxpayers. He had received authorization from Congress to send troops to Vietnam to fight communism and was confident the country was winning the war. Senator Eugene McCarthy had recently announced he would challenge Johnson for their party’s nomination, but the Minnesotan’s bid struck the president, his chief political advisers, and most observers as inconsequential and even unrealistic. Johnson’s decision to run was easy, because he sought to become a great president, like his political hero, Franklin Roosevelt.

However, the Tet offensive, launched on January 30 by America’s North Vietnamese and Viet Cong enemies and aimed at toppling the U.S.-supported Saigon regime, upset Johnson’s optimistic assumptions in dramatic fashion. It set the stage for one of the most tumultuous presidential elections in modern U.S. history.

The North Vietnamese forces (regular North Vietnamese Army and the Viet Cong guerrillas) failed to achieve their more ambitious goals with the Tet attacks. They were unable to rally significant popular support for the uprising they wanted in South Vietnam, they could not hold any of the cities and towns they had targeted, and they failed to overthrow the South Vietnamese government. North Vietnam’s bold gamble did succeed, nonetheless—and spectacularly so—in puncturing the illusion of progress that the Johnson administration had been holding before the American public. Support for the administration’s policies began to erode steadily in the wake of Tet. Before the offensive, 50 percent of those polled believed the United States was making progress in bringing the war to a successful conclusion; after Tet, only 33 percent held that view. A remarkable 49 percent expressed the opinion that the United States never should have intervened in Vietnam in the first place.

On February 8, New York Senator Robert F. Kennedy, a sworn political enemy of Johnson and an increasingly outspoken opponent of the war, offered a withering critique of administration policy that resonated with the growing ranks of skeptics. “Our enemy, savagely striking at will across all of South Vietnam, has finally shattered the mask of official illusion with which we have concealed our true circumstances, even from ourselves,” he declared in a major public address. Kennedy called for immediate negotiations aimed at a peaceful settlement, emphasizing that the United States appeared “unable to defeat our enemy or break his will—at least without a huge, long and ever more costly effort.”

Johnson’s own political party, dominant since the New Deal of the 1930s, was by then profoundly split over the war. That point was driven home when, on March 12, McCarthy nearly defeated Johnson in the first presidential primary in New Hampshire. Then, just four days later, the charismatic Kennedy announced his bid for the Democratic presidential nomination, confronting Johnson with a much more formidable political foe than the introverted, less-well-known McCarthy. Meanwhile, from the other end of the political spectrum, Republican contender Richard M. Nixon and third-party hopeful George Wallace—a former Democratic governor of Alabama, ardent segregationist, and supporter of the war—were readying their challenges to the globalism and liberalism of an increasingly fractured Democratic Party.

The embattled Johnson responded to mounting political pressures and those shifting popular opinions by announcing, on March 31, a major shift in U.S. policy in the Vietnam War. In an address to a nationwide television audience, the president said he was ceasing nearly all bombing raids against North Vietnam and called upon Hanoi to enter into formal negotiations with the United States to secure a peace settlement. Just before the close of his address, Johnson shocked his listeners by declaring he would neither seek nor accept his party’s presidential nomination. Johnson’s decision was not easy, because he was driven by deep political ambition, but he was greatly troubled by the divisions and turbulence in American society and by an increasingly unpopular war that was so closely tied to his administration.

Formal peace talks opened in Paris in May 1968, but unrest in the United States enormously complicated the prospects for a resolution of the diplomatic issues separating Washington, Hanoi, and Saigon. The assassination in April of civil rights icon Martin Luther King Jr.; the dozens of bloody and destructive race riots that followed, including in Washington, DC, itself; the assassination of Robert F. Kennedy two months later; the protests, street fighting, and heavy-handed police crackdown that accompanied the Democratic convention in Chicago that August; and the bitterly contested three-way election pitting Vice President Hubert H. Humphrey against Nixon and Wallace—all served to persuade North Vietnam not to compromise with a lame-duck U.S. leader. Johnson’s final months in office were thus buffeted by a bloody stalemate on the ground in Vietnam and a frustrating impasse around the peace talks’ conference table in Paris, each unfolding against the backdrop of a highly contentious election campaign. Nixon heralded his secret plan to end the Vietnam War and insisted he would reinstitute “law and order” throughout American society, appealing to voters unsettled by a seemingly unending conflict and the domestic unrest and disorder brought in its train. Humphrey sought to distance himself from Johnson’s Vietnam War policies without actually breaking from the notoriously thin-skinned Oval Office patron whose support he needed.

In a last-ditch effort to break the diplomatic deadlock, Johnson approved a complex compromise with North Vietnam that allowed South Vietnamese and National Liberation Front participation in the Paris peace talks. The seeming breakthrough was made possible only by Hanoi’s sudden abandonment of its longstanding opposition to participation by the American-backed “puppet” Nguyen Van Thieu of South Vietnam. The South Vietnamese dragged their feet, nonetheless, with President Thieu charging that the compromise amounted to a “clear admission of defeat” by the United States. At this juncture, the South Vietnamese president was quite obviously awaiting the outcome of the American election, calculating that he could cut a better deal with Republican nominee Nixon than with the White House’s current occupant. Signals to that effect were being conveyed clandestinely to Thieu’s representatives by representatives from inside the Nixon camp. This was a treasonable offense, if proved, and one that Johnson learned about to his fury and disgust via telephone taps, intercepts, and surveillance.

On October 31, in a final attempt to end the deadlock—and to help bolster his vice president’s electoral prospects as well—Johnson announced a complete halt of all U.S. bombing operations against North Vietnam. It proved too little, too late. Once again, Thieu balked. A furious Clark Clifford, Johnson’s new secretary of defense, thought the South Vietnamese leader guilty of double dealing and duplicity. Only after another two weeks had elapsed did the South Vietnamese leader reluctantly agree to send a delegation to Paris. By that time, Nixon was the president-elect, having defeated Humphrey by a razor-thin margin.

The election of 1968 proved pivotal to the course of modern American history in numerous respects. It demonstrated the efficacy of the “backlash” tactics pioneered by Nixon and Wallace to highlight and condemn the perceived excesses of liberal permissiveness, the welfare state, the anti-war movement, and the counterculture. It also brought to the White House a chief executive dedicated to extricating the United States from the chaos of Vietnam, but to do so slowly and deliberately, without compromising the credibility of U.S. commitments, without diminishing America’s commanding status as a global superpower, and without threatening his plans for dealing with China and the Soviet Union. In political terms, it heralded the high-water mark of the New Deal order and the onset of a new era of Republican ascendancy.

1. Republican candidate Richard Nixon played on all the following concerns in his 1968 presidential campaign except

2. The Tet Offensive in January 1968 marked a turning point because it

3. The third-party candidate who complicated the 1968 election was

4. President Lyndon B. Johnson responded to the events of 1968 by

5. South Vietnam did not commit to a decision at the 1968 peace talks, because

“I don’t accept the idea that this is just a military action, that this is just a military effort, and every time we have had difficulties in South Vietnam and Southeast Asia we have had only one response, we have had only one way to deal with it – month after month – year after year we have dealt with it in only one way and that’s to send more military men and increase our military power and I don’t think that’s what the kind of a struggle that it is in Southeast Asia. . . .

Robert F. Kennedy, Remarks at the University of Kansas, March 18, 1968

1. The provided excerpt most directly contributed to

2. The excerpt most directly reflected a growing belief that