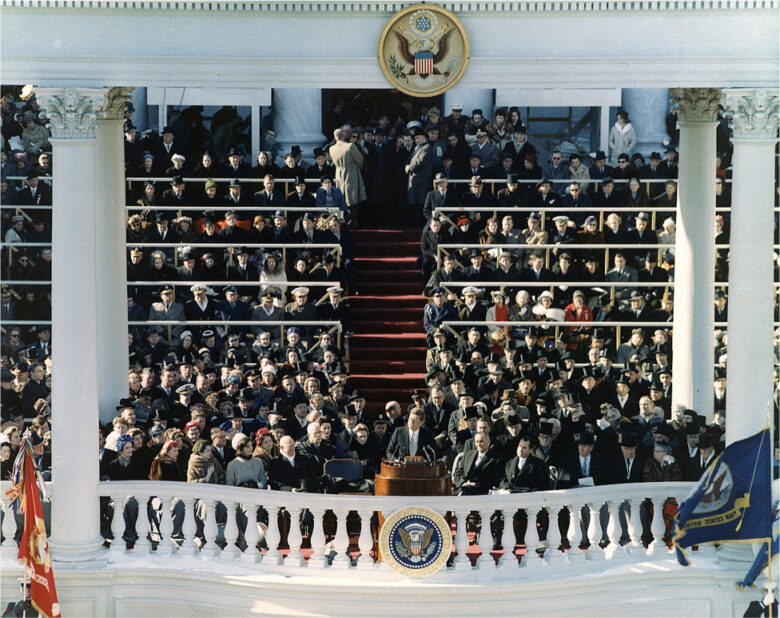 Use this narrative with The Cuban Missile Crisis Narrative and the John F. Kennedy, Inaugural Address, January 20, 1961 Primary Source to cover President Kennedy’s inauguration and his approach to the United States’ relationship with the Soviet Union.

President John F. Kennedy’s inaugural address on January 20, 1961, remains one of the most widely recognized examples of presidential oratory. Kennedy’s speech was brief and thematic, using paradoxical turns of phrase that suggested poignancy and a new perspective on the meaning of political participation. Several phrases that appeared in the address entered into the national vocabulary. The speech’s main points were to encourage public service and provide an expansive foreign policy vision for Cold War America.

Kennedy began preparing his inaugural address in earnest in the closing weeks of his transition into office, in early January 1961. He asked his confidant and advisor, Theodore Sorensen, to help him draft it. The president-elect was aware that his victory in the 1960 election the previous November had been narrow (the popular-vote margin was two-tenths of 1 percent) and that his campaign had been characterized by generalities rather than specifics. However, he opted to prepare an inaugural address that would continue to appeal to general principles rather than specific policies. He also wanted to look to the future with hope and optimism for a rising generation of Americans. He asked Sorensen whether he could identity the “secret” of Lincoln’s Gettysburg Address and draft a speech draft with that in mind.

Sorensen concluded that an important characteristic of Lincoln’s address was the preference for small words and short phrases that could capture a point more profoundly than long, wordy passages. Kennedy said he wanted his address to be one of the briefest of presidential inaugurals, and he wanted it to give foreign policy precedence over domestic policy on the grounds that the nation could unify on the Cold War outlook in foreign affairs but was necessarily divided about political issues at home.

Sorenson completed a draft in early January that was fewer than 1,900 words. He had studied the vast record of Kennedy’s political speeches (Kennedy had given upward of 15 speeches a day while running for president) and identified material that would suit the inaugural. Sorensen’s work was largely a collection of lines Kennedy had already voiced on the campaign trail in 1960 or during his career in the Senate since 1953, adjusted to meet the circumstances of the beginning of his presidency. Kennedy worked on Sorensen’s draft extensively in the two weeks before the inaugural, mainly at his father’s home in Palm Beach, Florida, refining it into the finished product that became the inaugural address of January 20.

Whether Sorensen or Kennedy principally wrote the inaugural address has long been an issue of historical debate, stemming from questions that had arisen in 1957 when Kennedy’s book Profiles in Courage won the Pulitzer Prize. Critics claimed that Sorensen had substantially written that book. In response, Kennedy successfully pressured news organizations to retract such claims or face a lawsuit. The balance of the evidence today indicates that Kennedy was largely the author of his book and his inaugural address. The ideas and language originated with Kennedy, and Sorensen collaborated on the writing.

Kennedy’s inauguration day followed a night of elegant parties in Washington, DC, as well as a violent snowstorm. The parade preceding the ceremony was in doubt until an army of workers removed the many cars on Pennsylvania Avenue that had been buried in the snow. Robert Frost was supposed to read a poem he had written for the occasion, but the sun was so brilliant that he could not read his script. Instead, he recited from memory another poem, “The Gift Outright,” a song to the settlement of the United States that he had composed in 1941.

Immediately after taking the oath of office at midday, Kennedy delivered his address, hatless and without an overcoat in 20°F weather. After brief opening pleasantries, the president began the substantive part of his speech with the paradoxes that would characterize it as a whole. “Man holds in his mortal hands the power to abolish all forms of human poverty and all forms of human life,” he said, referring to what he saw as the responsibility of the industrialized nations to help developing nations and the superpowers to rid the world of nuclear weapon arsenals.

The speech committed the United States to the defense of freedom during the Cold War. After his first point, Kennedy spoke a line that soon became famous: “Let the word go forth to friend and foe alike, that a torch has been passed to a new generation of Americans.” Kennedy was the first president born after 1900 and was part of the “Greatest Generation,” forged in the challenges of the Great Depression and World War II. After he briefly expanded on this idea, he made his signature remark announcing an expansive foreign policy goal of defending global freedom: “Let every nation know, whether it wishes us well or ill, that we shall pay any price, bear any burden, meet any hardship, support any friend, oppose any foe to assure the survival and the success of liberty.” When the Vietnam War intensified after Kennedy’s death, criticism of this line arose, implicating it in fostering ill-advised military intervention in Vietnam. The inaugural did not render itself immune from such criticisms; its next line was, “This much we pledge – and more.”

Kennedy mentioned communism explicitly in the address, in a section concerning the poorer “half [of] the globe” (the “Third World,” a term that had arisen in the 1950s), saying that, “To those peoples, we pledge our best efforts to help them help themselves, ‘not because the communists may be doing it,’ but because it is right.” This point was emphasized later in the speech, with Kennedy stating, “If a free society cannot help the many who are poor, it cannot save the few who are rich.” President Kennedy fulfilled this part of his vision by working with Congress to establish the Peace Corps, the Alliance for Progress (for Latin America), and the Agency for International Development to promote economic growth in developing nations.

Alluding to the Cold War struggle against the Soviet Union, Kennedy addressed those communist nations, led by the Soviet Union, that together stood as an “adversary” of the United States. He affirmed that the United States would maintain a strong defense even as it acknowledged the incomparable danger of nuclear annihilation. Therefore, he raised the prospect of sincere and earnest negotiations between the superpowers. He mused that “not all this will be finished in the first, ‘one thousand days, nor will [this work] be finished’ perhaps in our lifetime on this planet.” But he pledged he would be willing to begin the process with the Soviet Union.

Kennedy closed the speech with a call to public service and sacrifice even amid postwar plenty. He issued a “trumpet summons”, not as a call to battle, though embattled we are. Being “embattled” referred to the preparedness of the American people to defend themselves whatever the potential cost to their burgeoning prosperity. Kennedy’s call was one of responsibility, as a global and strategic superpower, to serve other nations and the cause of peace. He said he did not think Americans would shirk their responsibilities regardless of the difficulties. “I do not believe that any of us would exchange places with any other people or any other generation.” He finished the speech by asking Americans to face the daunting tasks ahead. “And so, my fellow Americans: ask not what your country can do for you – ask what you can do for your country.” Echoing Lincoln at Gettysburg and perhaps inadvertently Frost in “The Gift Outright,” he closed with a call to “go forth to lead the land we love,” before invoking “God’s blessing.”

Ten days later, Kennedy gave his first State of the Union message. It was a long and detailed policy program, much of it having to do with domestic spending. In this way, it was complementary to the inaugural, whose large thoughts and interesting turns of phrase now were accompanied by the elucidation of practical details. How much the thousand days of the Kennedy presidency may have flowed from the impulses of the inaugural remains a difficult question. During his administration, Kennedy affirmed U.S. commitments in Latin America, began the tradition of signing arms limitation treaties with the Soviet Union, and started the Peace Corps, all as generally suggested in the address. But he also grew in his office and met challenges with solutions not contained in the inaugural address. His two major legislative accomplishments – the civil rights and tax cut bills introduced in 1963 and made law in 1964 – remain hard to connect to the themes to which he had dedicated himself in the speech.

1. Which of the following best summarizes a main point of Kennedy’s inaugural address?

2. President John F. Kennedy did not discuss which of the following topics in his inaugural address?

3. For inspiration in the drafting of this inaugural address, President John Kennedy turned to which historic example?

4. John F. Kennedy wanted to focus on foreign policy in his inaugural speech primarily because

5. In his inaugural address, President Kennedy stated it was the responsibility of industrialized nations to

6. The “greatest generation” refers to those Americans who dealt with the challenges of

“The torch has been passed to a new generation of Americans born in this century, tempered by war, disciplined by a hard and bitter peace, proud of our ancient heritage and unwilling to witness or permit the slow undoing of those human rights to which this Nation has always been committed, and to which we are committed today at home and around the world.

Let every nation know, whether it wishes us well or ill, that we shall pay any price, bear any burden, meet any hardship, support any friend, oppose any foe, in order to assure the survival and the success of liberty.

Finally, to those nations who would make themselves our adversary, we offer not a pledge but a request: that both sides begin anew the quest for peace, before the dark powers of destruction unleashed by science engulf all humanity in planned or accidental self-destruction.”

1. Which of the following actions of the Kennedy administration best reflects the message in the excerpted address?

2. The ideas expressed by Kennedy in the excerpt were most similar to which twentieth-century policies?

Clarke, Thurston. Ask Not: The Inauguration of John F. Kennedy and the Speech That Changed America. New York: Penguin, 2010.