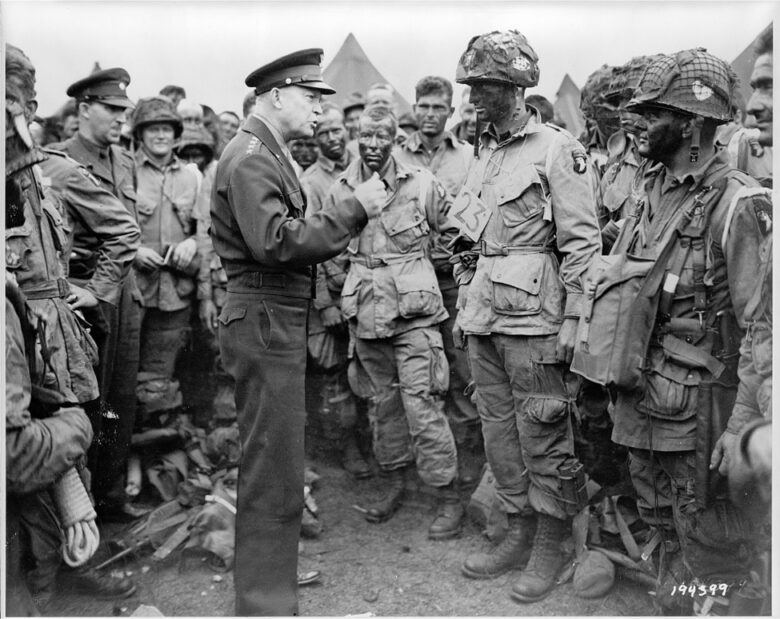 Use this narrative with the Dwight Eisenhower, D-Day Statement, 1944 Primary Source to give students a fuller understanding of the campaign. This narrative can also be used with the Raising the Flag on Iwo Jima Narrative and the Phil “Bo” Perabo, Letter Home, 1945 Primary Source to showcase American soldiers’ experiences during WWII.

Allied leaders had debated opening a second front in German-occupied western Europe as early as 1942. Soviet Premier Joseph Stalin’s pressure to launch such a front was unrelenting and reiterated at every Allied conference. Developing the means to launch a successful invasion was far from easy, however. Until 1944, the United States and Great Britain lacked the forces and the means to attack the Germans in France and successfully open a beachhead to invade Normandy. And success was all important. If a large-scale invasion failed, the results would be disastrous, and not just in terms of troops lost. Assembling another invasion might take years.

By the spring of 1944, however, the outlines of what came to be called Operation Overlord were complete. Five divisions of American, Canadian, and British troops, supported by three airborne divisions of paratroopers and glider-borne soldiers, were to land on beachheads in Normandy. After securing the landing beaches, establishing a firm perimeter, capturing the port of Cherbourg, establishing portable harbors there for resupply, and assembling armored reinforcements, Allied forces could drive inland to begin the liberation of France.

Several moving pieces had to be put in place before the plan could get underway. First, adequate naval support, and especially transport and landing craft, had to be secured – an especially difficult undertaking given the demands of warfare in both Europe and the far-flung Pacific, where amphibious landings on the Japanese-held islands were frequent. Second, American and British air forces had to work in complete coordination with ground forces, not only placing paratroopers and glider-borne forces on target but also preventing German efforts to move reinforcements and especially panzer divisions toward the beaches. Third, Free French forces, some owing allegiance to General Charles De Gaulle and others not, had to be alerted to the invasion and their support coordinated. Finally, an elaborate campaign of deception was established to convince the Germans that the primary Allied invasion would take place not in Normandy but at the heavily defended and more centrally located Pas de Calais, at the narrowest point of the English Channel.

Coordinating these factors, many under the control of disparate personalities who had different ideas about how the invasion should take place, took months. The Allied Supreme Commander General Dwight D. Eisenhower, working with British General Bernard Law Montgomery (in command of the invading ground forces) and British commanders of the supporting naval and air forces, finally thought he had his pieces assembled at the beginning of June, but there was one final decision to be made. Because of the tides and other factors, the Allies could land at the beaches of Normandy only on certain dates, but weather reports suggested unsettled weather in early June. In a tense meeting at his headquarters in Bletchley Park, England, Eisenhower elected to gamble on a break in the weather and said “Go” for the invasion on June 6, 1944.

At this critical moment, Eisenhower’s leadership abilities came to the fore. Rather than remaining at headquarters, he made a point of visiting, encouraging, and even joking with the troops assembled to carry out the invasion. He dispatched a message to them declaring, “You are about to embark upon a great crusade, toward which we have striven these many months. The eyes of the world are upon you. . . . I have full confidence in your devotion to duty and skill in battle. We will accept nothing less than full Victory. Good luck! And let us all beseech the blessing of Almighty God upon this great and noble undertaking.” But the general also penned a draft dispatch to be sent in case the invasion failed, taking full responsibility upon himself.

American and British airborne troops carried out the first phase of the invasion by landing around the coastal villages behind German beach defenses on the night of June 5-6. Although badly scattered and forced to work in small, poorly armed groups, they succeeded in their primary mission of seizing – and, where necessary, destroying – important bridges and crossroads to hold back enemy reinforcements. U.S. Army Rangers carried out a heroic and costly assault against German cliffside emplacements at Pointe du Hoc overlooking Omaha Beach, only to discover that the enemy had already dismantled their heavy guns.

The primary invasion took place on five Normandy beaches, code-named (from west to east) Utah, Omaha, Gold, Juno, and Sword. British and Canadian troops landed at the latter three beaches against weaker-than-expected enemy opposition and quickly seized their immediate objectives. At Utah, thanks in part to airborne support inland, the U.S. 4th Division landed successfully and laid the groundwork for the capture of the Cotentin Peninsula and the all-important port of Cherbourg.

At Omaha Beach, however, facing strong tides and mistakes by inexperienced infantry and naval forces, the invasion nearly foundered. Here, troops of the U.S. 29th and 1st Divisions (the famous “Big Red One”) faced a strong defense from well dug-in and determined German infantry that they struggled to overcome. Heavy casualties on the beaches led General Omar Bradley, commanding the U.S. First Army, briefly to consider abandoning the beachhead. But the infantry refused to give up and, with great courage and sacrifice, they finally managed to break the German defenses and establish a defensive perimeter. Fortunately, Allied ground attack aircraft also succeeded in their primary missions of supporting airborne troops inland and inflicting heavy casualties on German armored and infantry forces as they rushed toward the beaches.

Although casualties had been heavy at places like Omaha Beach, overall Allied losses for June 6 totaled 4,900 killed, wounded, and missing – far lower than Eisenhower and his generals had anticipated. The five Allied beachheads were linked together by June 12, and by the end of the month, Cherbourg had been captured. Firmly entrenched and supplied, thanks in part to elaborate and expensive portable harbors codenamed Mulberry that were established on the Normandy beaches (although one was destroyed by a storm on June 19), the Allies had succeeded in forming the long-awaited second front. Although the drive inland proved far more difficult than anticipated, the process of the liberation of Western Europe had begun.

The outcome of the events depicted in the photograph resulted in

2. The Allied leader overseeing D-Day was

3. One of the key concerns in Allied planning for Operation Overlord was

4. The D-Day invasion marked the

5. The Normandy invasion in World War II was considered necessary to

6. The night before the D-Day landings American and British troops successfully

“SUPREME HEADQUARTERS ALLIED EXPEDITIONARY FORCE Soldiers, Sailors, and Airmen of the Allied Expeditionary Force! You are about to embark upon the Great Crusade, toward which we have striven these many months. The eyes of the world are upon you. The hope and prayers of liberty-loving people everywhere march with you. In company with our brave Allies and brothers-in-arms on other Fronts, you will bring about the destruction of the German war machine, the elimination of Nazi tyranny over the oppressed peoples of Europe, and security for ourselves in a free world. Your task will not be an easy one. Your enemy is well trained, well equipped and battle-hardened. He will fight savagely.”

1. The sentiments expressed in Eisenhower’s “Order of the Day” most directly led to

2. The situation referred to in the excerpt from Eisenhower’s Order of the Day was directly shaped by

3. The sentiments in the excerpt were most directly shaped by

Keegan, John. Six Armies in Normandy: From D-Day to the Liberation of Paris. New York: Viking, 1983.

McManus, John C. The Dead and Those About to Die: D-Day: The Big Red One at Omaha Beach. New York: Dutton Caliber, 2014.