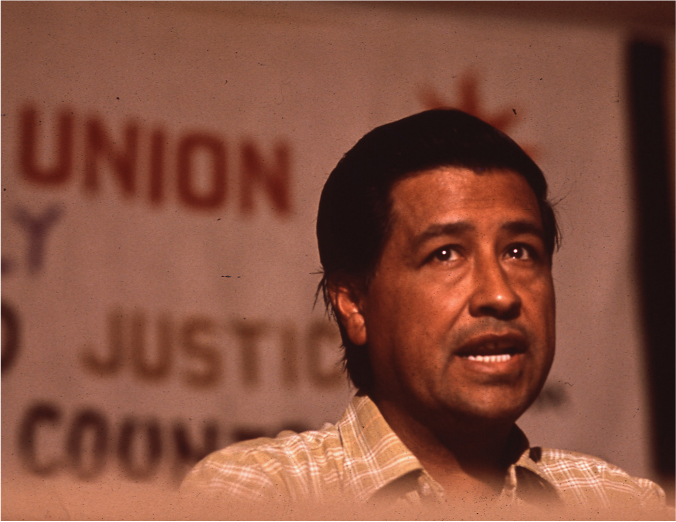 Use this Narrative with the Art as Protest: Images from the United Farm Workers of America, 1973-1978Primary Source while talking about the various civil rights movements occurring during the 1970s.

César Chávez was born near Yuma, Arizona, in 1927, on the farm his grandparents had settled in the 1880s. Like thousands of others, his family lost their land during the Great Depression, forcing them to join throngs of itinerant laborers crowding California in search of work. Chávez’s childhood as a migrant farmworker would forever shape him as he experienced firsthand the injustices of brutally long hours, back-breaking labor, corrupt labor contractors who deducted high rents from workers’ pay, and extremely low wages. Worse, although the Depression led to the creation of new labor laws, including the 1935 National Labor Relations Act, many of those protections did not apply to farm workers.

War ended the suffering of the Depression, and Chávez joined the U.S. Navy in 1944, at the age of 17. After his discharge, he returned to Delano, California, a community in the San Joaquin Valley famous for its table grapes. There he met and married Helen Fabela in 1948, and together the couple had seven children. In 1952, Chávez met Fred Ross, an organizer for the Community Service Organization (CSO), who was allied with radical Saul Alinsky’s Industrial Areas Foundation. Alinsky, a community organizer and activist, wanted poor people to organize and become politically active to pressure governments to be more attentive to their needs. Alinsky and Ross hoped to convince farmworkers to organize, and Chávez, despite having only an eighth-grade education, became a powerful speaker and leader in the CSO. Although he broke with the organization in 1962, his experiences informed his creation of theUnited Farm Workers (UFW).

Chávez’s decision to create a farmworker’s union changed his life and the lives of migrant workers in the United States. Dolores Huerta, a fellow CSO organizer, was the first person he approached to assist in the creation of the National Farm Workers Association (NWFA). It was a collaboration that would endure for the rest of his life. Two years later, the NWFA had more than 1,000 members, mostly in California. Chávez and Huerta hoped a union of farmworkers could agitate for higher wages and help with rising rents in migrant camps (as migrants, they rented houses or campsites, often from the very people for whom they labored).

In 1965, the NFWA joined several other organizations in a strike against grape growers in Delano that began with Filipino workers from the Agricultural Workers Organizing Committee (AWOC). The Filipino workers were upset that they received only $1.25 per hour compared with the $1.40 hourly wage of farmworkers who were part of the bracero program (a guest worker program started during World War II). Embracing the principles of nonviolence that Martin Luther King Jr. endorsed, the groups staged strikes and protests. In addition, they organized a successful consumer boycott of grapes that attracted international attention. In 1970, the growers relented and signed labor contracts with the strikers. Never before had migrant workers won such a major victory. By this time, the NFWA and AWOC had merged into the United Farm Workers.

Soft-spoken and thoughtful, Chávez had a leadership style marked by his devout Catholicism. He staged a march from Southern California to the state capitol in Sacramento, which he saw as a kind of spiritual penanceas much as a way of raising awareness for farmworkers’ rights. In 1968, after a UFW protest turned violent, Chávez staged a hunger strike as punishment for himself and his movement, the first of several hunger strikes he would undertake during his life. His commitment to nonviolence and justice won him many supporters. But every leader needs good lieutenants who can make up for their shortcomings, and Chávez’s number two, Dolores Huerta, was molded from tougher material.

Huerta grew up in a poor but diverse neighborhood in Stockton, California. Her single mother worked hard to support her and her two brothers. Her mother eventually opened a restaurant and hotel, which provided a lower-middle-class income for her children. Dolores, meanwhile, excelled in school, but societal expectations were low for Mexican American women. Following her mother’s example, she became a fiercely independent woman who saw herself as equal to men. After graduating high school, she attended community college but eventually dropped out, marrying her high school sweetheart in 1950. Not unlike feminist leader Betty Friedan, Huerta found herself wanting more and, as her marriage failed, she threw herself into civic organizations. These women’s organizations, however, did not address deeper social issues (e.g., poverty and racism) that increasingly drew her attention. Eventually, she joined the CSO, where she met Chávez.

Huerta’s contributions toLa Causa(the cause of farm workers rights) were many. She excelled at organization and detail, much more than Chávez. She believed in tackling issues head-on and was comfortable handling many confrontations. She and Chávez argued incessantly, and although she deferred to him publicly, in private she made her opinions known. She tangled with other leaders of the UFW, its members, and, of course, the growers. Such behavior was shocking in the Mexican American community, where women were not supposed to be active and assertive in public. Huerta’s strength of personality, however, undoubtedly helped propel the UFW forward.

After several successful boycotts, the UFW turned to raising awareness of other issues facing immigrant workers. California, pressured by the UFW, passed the first law governing farm-labor organizing, which eventually led to the establishment of the Agricultural Labor Relations Board(ALRB). Chávez endorsed the California law and became friendly with the new Democratic governor, Jerry Brown, who supported it. The law, passed in 1975, included provisions such as the right to boycott and strike, union voting rights for seasonal workers, and secret-ballot union elections.

Although the UFW had success in the 1970s, the 1980s brought challenges. The new presidential administration of Ronald Reagan (a former governor of California) opposed unions, and many in the American public had come to agree with his view. Unions struggled with internal corruption and other problems in the 1980s, and deindustrialization changed the nature of work for millions of Americans with the loss of factories that were going overseas. Even protests, strikes, and boycotts, the UFW’s chief tools, came to be seen as relics from the turbulent 1960s. In California, the ALRB was packed with pro-grower representatives who stifled the efforts of the UFW in labor disputes. Internal strife also plagued the union, with several high-profile leaders leaving, and union membership declined from a high of 30,000 in 1976 to only 12,000 by the early 1980s.

Worse, growers increasingly turned to undocumented workers for labor. Mexican nationals had legally worked in the fields since the bracero program of World War II, but increasingly people arrived without work visas, and their legal status made it impossible for the UFW to organize them. Growers could pay these workers less and undercut the UFW. The union tried to dissuade migrants from crossing illegally into the United States, but these efforts largely failed. Chávez accused the Immigration and Naturalization Service (INS)of working with growers to allow illegal immigrants to enter the country, and he demanded stricter enforcement of immigration laws to curtail illegal immigration.

The issue of pesticide poisoning offered Chávez a chance to revitalize the union and return it to the national spotlight. Many farmworkers, exposed to pesticides while working in the fields, were coming into medical clinics with symptoms of poisoning. Although the potential dangers of pesticides had first reached the public consciousness two decades earlier with Rachel Carson’s bestselling book Silent Spring, the effects on farmworkers had never caught the public’s interest before. Chávez figured he could attract the attention of Americans by focusing on the dangers of pesticides to workers and consumers. The UFW staged a new grape boycott and produced a film titled The Wrath of Grapes (a pun on the classic John Steinbeck novel of the Depression, The Grapes of Wrath). The union also organized marches and protests, and Chávez staged another high-profile hunger strike. For 36 days he subsisted entirely on water.

Although Huerta claimed the hunger strike was “a spiritual thing with him,” it also had the effect of refocusing national attention on the UFW’s call to boycott grapes. Celebrities, including actor Martin Sheen, participated in their own shorter hunger strikes to raise awareness. Although the boycott did hurt growers, it did not achieve Chávez’s larger goal of revitalizing the union. Lawsuits by growers also hurt the UFW, including a 1991 court decision that the UFW pay a fine of $2.4 million in damages from a 1979 strike. To deal with these problems, Chávez continued his usual frenetic pace of work. Another fast took too much out of him, however, and his friends convinced him to break it early. That evening, April 23, 1993, he retreated to bed exhausted and passed away in his sleep.

Although Chávez is remembered as the creator of an important union and a champion of social justice, in death he became much more. President Bill Clinton called him an “authentic hero,”and for Latinos, especially Mexican Americans, he became an icon and an inspiration. His rallying cry “Si se puede” (“Yes, we can”) continues to inspire social reformers today.

1. The event that led to the Chávez family’s losing their land in Arizona was

2. The law that allowed unions like the UFW to organize and negotiate with growers was

3. César Chávez’s most significant collaborator during his time as head of the UFW was

4. How did the National Labor Relations Act protect migrant workers?

5. The United Farms Workers was formed primarily to

6. The UFW’s influence began to diminish because

“The growers even went to India for labor, and in the early twenties they were recruiting in the Philippines. When they saw that many Mexicans were leaving their country because of the Revolution, they saw an opportunity. One grower explained that Mexicans were good for California land work because they were short and close to the ground. The growers went further than they ever went before. During World War II, our own government became the recruiter for laborers, braceros. Even today, as I stand here talking to you, we cannot choke off production on the great farms for one simple reason. The regulations on immigration are not being enforced. Our own government is the biggest strikebreaker against the union. The biggest weapon in the hands of the growers is the “green card” commuter.”

1. With which of the following issues of the time period was César Chávez most concerned?

2. Which of the following groups would most likely support the sentiments expressed in the excerpt?

3. The issues described in the excerpt most closely resemble which issues faced by American workers in the nineteenth century?

Garcia, Matt. From the Jaws of Victory: The Triumph and Tragedy of Cesar Chaves and the Farm Worker Movement. Berkeley, CA: University of California Press, 2012.