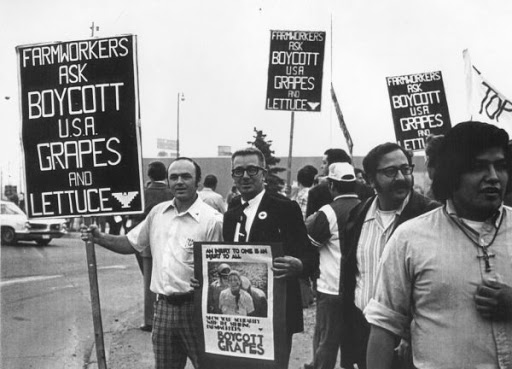 Migrant workers provided an important source of labor for agriculture in the California and the Southwest. Many of these workers were exposed to harmful pesticides, were poorly paid, and spent their lives in poverty. Efforts at striking or organizing prior to the 1960s were largely unsuccessful because the workers could not unionize and the growers were able to bring in other groups to harvest and break any strike. In 1962, Cesar Chavez, himself a former migrant worker, helped found the National Farm Workers Association, which later became known as the United Farm Workers (UFW). Chavez believed in the use of nonviolence and studied the tactics of Mohandas Gandhi and Dr. Martin Luther King Jr. Over the next few decades, Chavez organized several strikes, marches, and boycotts to protest conditions for farm workers and bring attention to their cause. His supporters created a variety of images during boycotts to encourage Americans not to purchase farm products in order to pressure growers to agree to the UFW’s demands. Chavez’s famous saying, “Sí se puede” (“Yes we can”), helped galvanize his supporters and is still used by activists today.