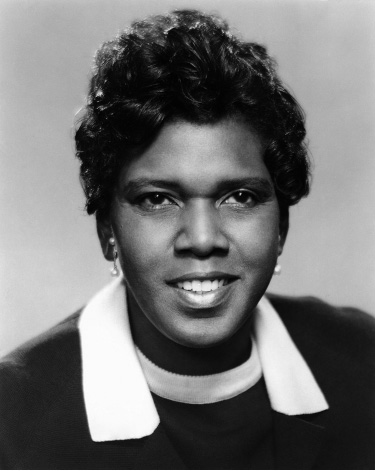 Barbara Jordan spent only six years in national politics, but they were full of significance. For most of American history, prominent African American political figures, including Frederick Douglass, Booker T. Washington, and Martin Luther King Jr., had operated largely outside formal political structures. Even Supreme Court Justice Thurgood Marshall’s most important contributions came before his public service on the bench. By the 1970s, thanks to the civil rights gains of the previous decade, a number of African Americans were serving in Congress and national office. But Jordan was the first whose reputation rose above mere politician to stateswoman. That reputation was rooted primarily in her gift for oratory, which so unexpectedly fixed America’s attention during the investigations into President Nixon’s conduct in the Watergate scandal.

Jordan’s was a quintessentially American story of humble beginnings overcome through talent, true grit, and faith in the promise of America. Raised in Houston, Texas, in the middle of the twentieth century, Jordan went to segregated schools until she attended Boston University School of Law. During her time at Texas Southern University (formerly Texas State University for Negroes), she had been a national champion debater. Her team defeated opponents from Ivy League schools such as Brown and Yale and tied with Harvard. After a few years in private law practice and a couple of unsuccessful runs for the Texas House of Representatives, Jordan was elected to the Texas Senate in 1966, where she was a very productive legislator.

During this time, she came to know Lyndon Johnson, whose patronage opened several doors for her and whose mentorship Jordan cherished. She belonged to the liberal wing of the Texas Democratic Party and was a committed partisan, but she was also pragmatic. She maintained good relationships with the more conservative wing of the party, which was associated with Governor John Connally, and gained a reputation for wheeling and dealing as a political operator like her mentor, Johnson. When she ran for the U.S. Congress in 1972, one of her opponents smeared her as a racial “sell-out,” too accommodating to Houston’s business class and too chummy with her white fellow politicians. But Jordan’s predominantly black congressional district was not persuaded by these charges and elected her with 80 percent of the vote. Jordan attributed the victory to her constituents’ practicality rather than her race. They wanted someone in Washington, DC, “who gets things done.”

Leon Jaworski, president of the American Bar Association and another close friend of Lyndon Johnson, saw in Jordan more than mere partisanship or pragmatism. He believed she was first and foremost a patriot. In a special ceremony held in Jordan’s honor in the Texas Senate chamber, Jaworski introduced her as a champion of “the principles of American citizenship.” Jordan “gained the respect and admiration of her community and state,” he continued, “not merely because she is an articulate and brilliant woman, but because she also believes in the processes of a democracy, upholding those standards that made this country great and deploring those which would erode its greatness.”

Soon Jordan was in Washington, where President Nixon became the focus of her first two years as a member of Congress. In 1972, Nixon had just won reelection in one of the greatest landslide victories in American presidential history. Therefore, he argued, the people had given him a mandate to govern, which meant he thought he could wield presidential power with little regard for Congress’s constitutional role or checks and balances. The Constitution, for example, gives Congress power over taxing and spending and gives presidents the power only to sign or veto the budget bill as a whole. Nixon thought he could sign budget bills and then simply refuse to spend money allocated for certain purposes. The “impoundment” of funds, as it was called, had been used by previous presidents going back to Jefferson, but Nixon was the first to use it to directly challenge Congress’s authority, replacing its spending priorities with his own.

As James Madison had predicted in The Federalist Papers, the dynamics of a properly constituted separation of powers created an institutional contest between branches of the government. “Ambition must be made to counteract ambition,” Madison insisted, if we are to prevent dangerous accumulation of power in a single set of hands. He wrote in Federalist Paper No. 51: “The interest of the man must be connected to the constitutional rights of the place.” Because Nixon was a Republican president, his actions raised the partisan hackles of Jordan and her fellow Democrats, but there were more fundamental principles at stake. Representatives and senators of both parties fought to maintain the constitutional authority of Congress among the three branches. Many feared that the rise of an “imperial presidency,” in which twentieth-century presidents had amassed too much power at the expense of Congress, was a threat to American democracy. With the exposure of Watergate, Jordan decided to help lead the effort to protect American institutions from criminal behavior by public officials who imagined themselves above the law.

Jordan saw early on the necessity of engaging the dispute with Nixon on the level of constitutional authority rather than party. In preparation for this challenge, she spent many hours at the Library of Congress reading history, law, the Federalist Papers, and other Founding documents to support her constitutional arguments. She presented her conclusions in her very first speech before the House. In sum, she argued, Nixon was trying to usurp power belonging to Congress. “These impoundments,” Jordan said, “reflect an unparalleled contempt for the laws of Congress, as the President ignores appropriation laws which he has sworn faithfully to execute.” She continued to return to the threat posed by Nixon’s contempt for the law, which violated his presidential oath of office.

In January 1974, the House Judiciary Committee, on which Jordan served, had been charged with investigating whether grounds existed to impeach the president for the Watergate cover-up and related crimes. Just as she had previously studied the separation of powers, Jordan now set out to read everything that “had ever been written, said, or uttered about impeachment.” She was determined to make the right decision, based on the good of the country and her duty as a member of Congress. She concluded that Nixon should be impeached for high crimes and misdemeanors and that she would vote to do so. Before a final vote of the committee, 15-minute slots were scheduled for each member to give a brief speech. Television cameras were let in so people around the country could see and hear.

Demonstrators in Washington, DC, in 1974 calling for the impeachment of President Nixon.

Instead of arguing directly for Nixon’s impeachment, Jordan’s speech struck a note of high-minded devotion to the country, to the Constitution, and to the solemn task before the committee, some of whose members had not yet made up their minds how to vote. Though her ancestors were slaves and she herself grew up a second-class citizen in the segregated South, Jordan claimed her place among the Constitution’s “We the People.” “My faith in the Constitution is whole, it is complete, it is total,” she said. “I am not going to sit here and be an idle spectator to the diminution, the subversion, the destruction of the Constitution.” She then presented a brief civics lesson on the purposes of the impeachment power, with many references to James Madison and other Framers of the Constitution. Again and again, she returned to the theme: “A president is impeachable if he attempts to subvert the Constitution.” She delivered her concluding words with great rhetorical effect: “If the impeachment provision in the Constitution of the United States will not reach the offense charged here, then perhaps that 18th century Constitution should be abandoned to a 20th century paper shredder.”

Jordan’s speech held the room spellbound and the committee chair in tears. The reaction beyond the chamber, among ordinary Americans, was even more momentous. Jordan became a household name, and letters poured in from every part of the country and from citizens holding many different viewpoints. Only a decade after the Civil Rights Act, Barbara Jordan’s speech challenged the president to obey the constitutional rule of law. Recognition of her impact was especially significant to the nation’s black citizens, whose trust in government had diminished since King’s assassination. When the Judiciary Committee voted to recommend impeachment and President Nixon abruptly announced his resignation, Jordan’s words seemed to take on even greater significance; they have been widely credited with contributing to Nixon’s decision.

1. Which president was a mentor to Barbara Jordan?

2. Barbara Jordan was a member of the House of Representatives from

3. What was the focus of Barbara Jordan’s most significant speech before the House Judiciary Committee?

4. Barbara Jordan’s speech before the House Judiciary Committee in January 1974 is best described as a

5. Barbara Jordan’s speech before the House Judiciary Committee was primarily motivated by

6. Which of the following best describes the immediate impact of Barbara Jordan’s speech before the House Judiciary Committee?

“I suggest, it is a misreading of the Constitution for any member here to assert that for a member to vote for an article of impeachment means that that member must be convinced that the President should be removed from office. The Constitution doesn’t say that. The powers relating to impeachment are an essential check in the hands of the body of the Legislature against and upon the encroachments of the Executive. The division between the two branches of the Legislature, the House and the Senate, assigning to the one the right to accuse and to the other the right to judge, the Framers of this Constitution were very astute. They did not make the accusers and the judgers—and the judges the same person. We know the nature of impeachment. . . . It is chiefly designed for the President and his high ministers to somehow be called into account. It is designed to ‘bridle’ the Executive if he engages in excesses. . . . The Framers confided in the Congress the power if need be, to remove the President in order to strike a delicate balance between a President swollen with power and grown tyrannical, and preservation of the independence of the Executive.”

1. With which of the following issues was Representative Jordan most concerned in her address?

2. The constitutional concept that influenced Representative Jordan’s speech is

3. Which of the following most directly resulted from the events surrounding the excerpted speech?

Jordan, Barbara. “Statement on the Articles of Impeachment.” July 25, 1974. https://www.americanrhetoric.com/speeches/barbarajordanjudiciarystatement.htm