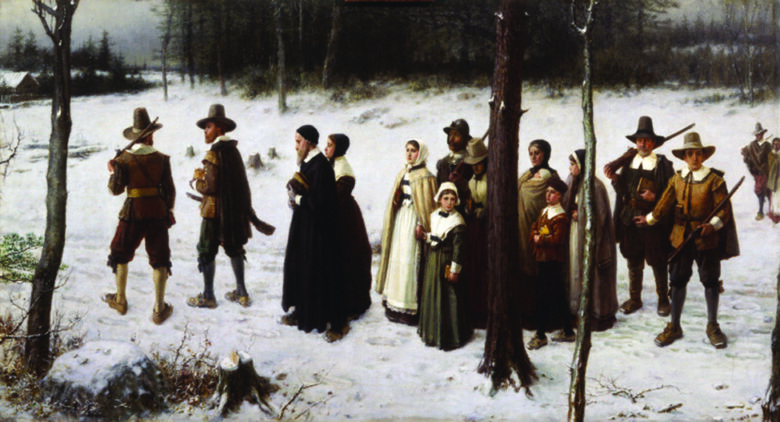 This Narrative should follow or accompany The English Come to America, The Founding of Maryland, and the William Penn and the Founding of Pennsylvania Narratives to explore the founding and development of regional differences in the colonies. Students can further explore the topic of religious dissent in the Ne

In the summer of 1630, a fleet of eleven ships bearing more than one thousand settlers landed in Massachusetts. The new arrivals were Puritans whose governor, John Winthrop, preached a sermon in which he announced that their errand was to establish a “city upon a hill” to serve as an example of a purified church and godly society. The Puritans believed the survival of the Massachusetts Bay Colony depended upon a common vision and unity based upon their mutual covenant.

Puritan theology was rooted in a belief in predestination – the idea that God, from the beginning of time, had determined who would be saved in heaven and who damned in hell. Individuals’ future status in the afterlife thus did not depend on their actions on earth, though it did manifest itself during the course of their lives. The Puritans believed that individuals who were among “the Elect,” the saved, underwent a conversion experience in which they sensed an overpowering feeling of salvation. Members of the Elect showed outward signs of God’s grace in moral and upright behavior that demonstrated they were “Visible Saints.”

Men and women were members of the Elect. Women could not be ministers or hold other positions of leadership, although they could hold spiritual meetings in their homes. They gathered in small groups to pray, read the Bible, and review sermons from Sunday services and Thursday lectures.

In 1634, Anne and William Hutchinson moved to the Massachusetts Bay Colony with their several children. William was a wealthy textile merchant who served in several government and church positions. Anne was the daughter of a Puritan clergyman who had run afoul of the authorities of the Church of England and was arrested for his dissenting views. Nevertheless, her father had educated Anne and instructed her thoroughly in scripture and theology. She was a follower of the controversial minister Reverend John Cotton, who had migrated to Massachusetts Bay and started the First Congregational Church. Anne Hutchinson soon became known as an outspoken troublemaker who frequently challenged authority (though otherwise conformed to social expectations as a woman and mother).

As was common in the colony, Hutchinson began to hold meetings for women in her home. At first, small gatherings of five or six women assembled at her house; however, she was soon hosting two meetings per week for large groups of more than sixty women and men. Participants listened raptly as she spoke from her chair, providing scriptural analysis and commentary on the sermons of the ministers. Women could repeat the content of sermons but were not supposed to comment on them, especially for men. Like Reverend Cotton, however, Hutchinson began to criticize the idea of “visible sainthood” as constituting a doctrine of “good works,” which resembled what Puritans thought was a corruption of the Catholic Church. She insisted upon a covenant of grace instead, in which individuals were justified by their faith alone. She even walked out of several Sunday services to express her displeasure with differing religious ideas preached from the pulpit. In some ways, her Puritan theology was even more strict than that of the other Puritans of the colony.

In the summer of 1637, the General Court ordered Hutchinson to stop holding meetings. The government and church authorities thought women should neither teach men nor criticize ministers, because it upset the patriarchal structure of Puritan society in which men ruled families, churches, and government. Their overriding goal was social harmony and obedience to a prescribed set of ideas. Nevertheless, Hutchinson persisted because she felt a duty to attend to her fellow Puritans’ spiritual needs and to discuss biblical and doctrinal truths with them.

By November, however, the authorities had had enough of Hutchinson’s public opinions and defiance. At age forty-six years and pregnant, she was arrested and put on trial for sedition before Governor John Winthrop and forty other deputies of the court. As the proceedings opened, Winthrop read the charges against Hutchinson: She had seditiously criticized the ministers and taught heretical religious views contrary to common opinion. Her views were dangerous to the colony because they threatened to “seduce many honest persons” and spread heresy that would destroy the common good. The governor thought this especially perilous because Hutchinson was a woman. As Winthrop pointed out to her directly, expressing these views was “a thing not tolerable nor comely in the sight of God nor fitting for your sex.”

Hutchinson was intelligent, quick-witted, and profoundly knowledgeable about scripture. She ably and courageously defended herself against the charges of the mostly hostile panel of judges and challenged them to point out specifically how she had violated the law or scripture with her views. “I am called here to answer before you,” she said, “but I hear no things laid to my charge.” When Winthrop asked why she held her weekly meetings, she vehemently replied, “It is lawful for me to do so.” When he asked whether it was appropriate for her to teach men, she wryly responded, “Why do you call me to teach the court?”

In making its case against her, the court called six ministers to testify about Hutchinson’s preaching. These men noted that she was “not only difficult in her opinions, but also of an intemperate spirit.” Hutchinson withstood the inquiry, answering questions boldly and honestly. Two days into the trial, she openly claimed to have learned God’s will through an immediate revelation. Deputy Governor Thomas Dudley scoffed, “How! An immediate revelation.” Hutchinson replied without hesitation, “By the voice of His own spirit to my soul.”

With those words, her fate in the colony was sealed. The ministers would not accept this challenge to their spiritual authority, especially from a woman. They did not accept the claim that a person could experience an immediate divine revelation. Expecting the worst, Hutchinson vowed, “Now if you do condemn me for speaking what in my conscience I know to be truth, I must commit myself unto the Lord.”

After several days of testimony, Winthrop issued the court’s verdict. “The court,” he said, “hath already declared themselves satisfied concerning the things you hear, and concerning the troublesomeness of her spirit and the danger of her course amongst us, which is not to be suffered.” Hutchinson was convicted of sedition and heresy and sentenced to be jailed and then banished from the colony as a woman “unfit for our society” the following spring. Because of the idea of a covenant that bound New England society together religiously, politically, and socially, the community could not keep an unrepentant heretic among them or they would be punished collectively by God. When Hutchinson demanded, “[Why] I am banished?” Winthrop replied, “Say no more. The court knows [why] and is satisfied.”

Hutchinson was also excommunicated from the church. The next year, 1638, she, her husband, their fourteen children, and sixty of her followers moved to the island of Aquidnick (Rhode Island), a haven for religious dissenters. In 1642, after the death of her husband, Hutchinson and her youngest children moved to the Dutch colony of New Netherlands (New York). The Siwanoy Indians on Long Island launched a retaliatory raid against several outlying settlements there a year later and killed Hutchinson and all but one of her children.

Although some interpreters paint Hutchinson as a victim of Puritan repression or a hero of modern feminism, the truth is more complex. A woman who risked everything for the courage of her convictions, she was silenced pushing the boundaries of patriarchy. Yet, she was also uncompromising in her orthodox religious beliefs and held views that challenged the unity of the fledgling colony. The banishment of Anne Hutchinson revealed many tensions within Puritan society.

1. Anne Hutchinson was a follower of which Massachusetts Bay Colony Puritan minister?

2. Why did Anne Hutchinson persist in holding meetings to discuss the Bible and doctrinal truths after she had been ordered by the General Court to stop this practice?

3. Why did the General Council prohibit Anne Hutchinson from holding meetings in 1637?

4. At her trial, Anne Hutchinson most likely sealed her fate when she referred to which of the following?

5. What sentence was pronounced on Anne Hutchinson?

6. What was the fate of Anne Hutchinson?

“Mrs. H.: If you please to give me leave I shall give you the ground of what I know to be true. Being much troubled to see the falseness of the constitution of the Church of England, I had like to have turned Separatist. . . . The Lord knows that I could not open scripture; he must by his prophetical office open it unto me. So after that being unsatisfied in the thing, the Lord was pleased to bring this scripture out of the Hebrews. he that denies the testament denies the testator, and in this did open unto me and give me to see that those which did not teach the new covenant had the spirit of antichrist, and upon this he did discover the ministry unto me; and ever since, I bless the Lord, he hath let me see which was the clear ministry and which the wrong. Since that time I confess I have been more choice and he hath left me to distinguish between the voice of my beloved and the voice of Moses, the voice of John the Baptist and the voice of antichrist, for all those voices are spoken of in scripture. Now if you do condemn me for speaking what in my conscience I know to be truth I must commit myself unto the Lord. Mr. Nowel [assistant to the Court]: How do you know that was the spirit? Mrs. H.: How did Abraham know that it was God that bid him offer his son, being a breach of the sixth commandment? Dep. Gov.: By an immediate voice. Mrs. H.: So to me by an immediate revelation. Dep. Gov.: How! An immediate revelation.”

Excerpts from The Examination of Mrs. Anne Hutchinson at the Court at Newton, 1637

1. What passage in the excerpt provided most seriously violates Puritan beliefs of the mid-seventeenth century?

2. Based on the excerpt of Anne Hutchinson’s testimony, which statement is not true?

3. The excerpt provided supports which generalization about the seventeenth-century Massachusetts Bay Colony?