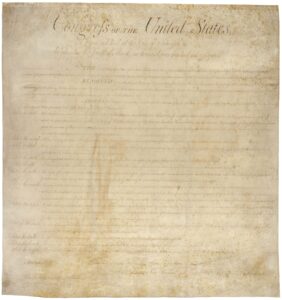 The first 10 amendments to the Constitution make up the Bill of Rights. James Madison wrote the amendments, which list specific prohibitions on governmental power, in response to calls from several states for greater constitutional protection for individual liberties. For example, the Founders saw the ability to speak and worship freely as a natural right protected by the First Amendment. Congress is prohibited from making laws establishing religion or abridging freedom of speech. The Fourth Amendment safeguards citizens’ right to be free from unreasonable government intrusion in their homes through the requirement of a warrant. The Bill of Rights was strongly influenced by the Virginia Declaration of Rights, written by George Mason. Other precursors include English documents such as the Magna Carta, the Petition of Right, the English Bill of Rights, and the Massachusetts Body of Liberties. One of the many points of contention between Federalists, who advocated a strong national government, and Anti-Federalists, who wanted power to remain with state and local governments, was the Constitution’s lack of a bill of rights that would place specific limits on government power. Federalists argued that the Constitution did not need a bill of rights, because the people and the states kept any powers not given to the federal government. Anti-Federalists held that a bill of rights was necessary to safeguard individual liberty. Madison, then a member of the U.S. House of Representatives, altered the Constitution’s text where he thought appropriate. However, several representatives, led by Roger Sherman, objected, saying that Congress had no authority to change the wording of the Constitution. Therefore, Madison’s changes were presented as a list of amendments that would follow Article VII. The House approved 17 amendments. Of these, the Senate approved 12, which were sent to the states for approval in August 1789. Ten amendments were approved (or ratified). Virginia’s legislature was the final state legislature to ratify the amendments, approving them on December 15, 1791.

The Bill of Rights – Full Text

A well regulated militia, being necessary to the security of a free state, the right of the people to keep and bear arms, shall not be infringed.

No soldier shall, in time of peace be quartered in any house, without the consent of the owner, nor in time of war, but in a manner to be prescribed by law.

The enumeration in the Constitution, of certain rights, shall not be construed to deny or disparage others retained by the people.