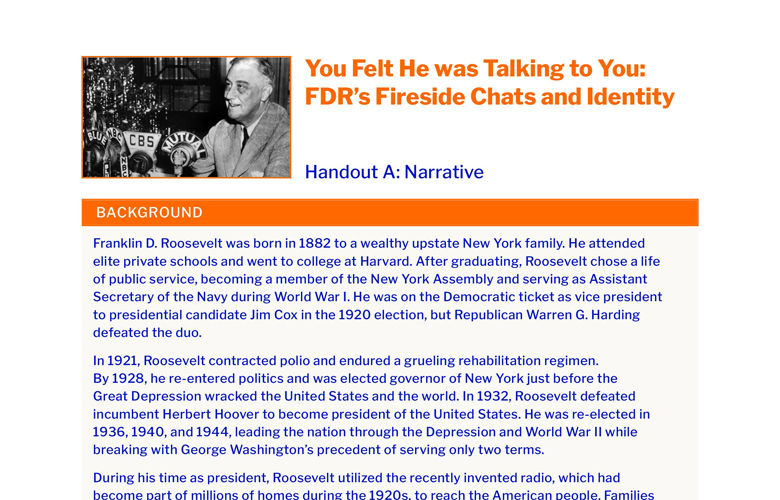 Franklin D. Roosevelt was born in 1882 to a wealthy upstate New York family. He attended elite private schools and went to college at Harvard. After graduating, Roosevelt chose a life of public service, becoming a member of the New York Assembly and serving as Assistant Secretary of the Navy during World War I. He was on the Democratic ticket as vice president to presidential candidate Jim Cox in the 1920 election, but Republican Warren G. Harding defeated the duo.

In 1921, Roosevelt contracted polio and endured a grueling rehabilitation regimen. By 1928, he re-entered politics and was elected governor of New York just before the Great Depression wracked the United States and the world. In 1932, Roosevelt defeated incumbent Herbert Hoover to become president of the United States. He was re-elected in 1936, 1940, and 1944, leading the nation through the Depression and World War II while breaking with George Washington’s precedent of serving only two terms.

During his time as president, Roosevelt utilized the recently invented radio, which had become part of millions of homes during the 1920s, to reach the American people. Families would gather around the radio in living rooms, and groups of friends and strangers would meet in public to listen to a boxing match or baseball game. While he was governor, Roosevelt had experimented with giving an informal address directly to the people rather than a formal speech. Given his success, Roosevelt decided to deliver “Fireside Chats” 30 times throughout his presidency. The president used these messages to assuage American’s fears during the Depression and World War II, as well as to promote his policies.

When Roosevelt spoke, he developed an intimate link with listeners, who felt as if the president was speaking directly to them. The American people believed they had a friend in Roosevelt; someone who cared about their problems and offered consolation, answers, and encouragement.

On the evening of Sunday, March 12, after only a week in the White House, Roosevelt sat at a desk filled with microphones. The announcer introduced Roosevelt, stating, “The president wants to come into your house and sit beside your fireside for a little fireside chat.” As he began his chat, FDR didn’t attempt grand, sweeping oratory, but instead spoke in genial, intimate terms. Roosevelt later said he tried to identify with each of the listeners as if they were a “mason at work on a new building, a girl behind a counter, a farmer in his field.”

In this first chat, which reached about 60 million Americans, Roosevelt discussed the banking crisis sweeping the nation. His simple terms soothed the fears of average people who were concerned about losing their money. Confidence in the nation’s banks was bolstered, and many re-opened. Humorist Will Rogers joked that Roosevelt explained the banking crisis in such clear terms, even the bankers could understand it. One reporter said, “You felt he was talking to you, not to 50 million others but to you personally.” That was the goal Roosevelt was trying to achieve. Many people would stop First Lady Eleanor Roosevelt and tell her, “He used to talk to me about my government.” She believed that the president had created a dialogue with millions of Americans.

On Dec. 29, 1940, people began filtering out of movie theaters and restaurants to make sure they arrived home before 9 p.m. to hear Roosevelt address the country about helping Britain face down Nazi Germany. “We must be the great arsenal of democracy,” Roosevelt thundered. “For this is an emergency as serious as war itself. We must apply ourselves to our task with the same resolution, the same sense of urgency, the same spirit of patriotism and sacrifice as we would show were we at war.” Letters and telegrams to the White House supported the president’s speech by a ratio of a hundred to one On May 27, 1941, as the nation slid closer to war, Roosevelt went on the air to declare that there was an “unlimited national emergency” that required greater preparations for war. Listeners heard the president’s grim determination over the airwaves, and Eleanor Roosevelt reported that she saw the “weight of responsibility” he bore. Sixty-five million Americans listened to the Fireside Chat, and millions more listened overseas to determine the future of American involvement in World War II. The New York Times reported, “For almost an hour, a whole nation here stilled itself to listen to his words.”

On Dec. 7, 1941, Japan attacked Pearl Harbor. FDR asked for and received a declaration of war from Congress; two days later, Roosevelt’s Fireside Chat created a sense of shared purpose, unity, and sacrifice amongst the American people. “We are all in it—all the way. Every single man, woman, and child is a partner in the most tremendous undertaking in American history. We must share together the bad news and the good news, the defeats and the victories—the changing fortunes of war,” Roosevelt proclaimed. In the coming months, Japan would conquer several islands and other territories throughout the Pacific, and Germany would advance deep into Russia. Despite this, Americans felt as if their president would lead them to eventual victory.

Novelist Saul Bellow remembered what it was like to listen to a Fireside Chat. He was walking on a Sunday evening in Chicago just as the summer sun was setting, and wrote, “Drivers had pulled over, parking bumper to bumper, and turned on their radios to hear Roosevelt.” They rolled down their windows and opened their doors, and any pedestrian who walked by could hear his words. “You could follow [the chat] without missing a single word as you strolled by. You felt joined to these unknown drivers, men and women smoking their cigarettes in silence, not so much considering the President’s words as affirming the rightness of his tone and taking assurance from it.”

Roosevelt had mastered the use of the new technology of radio not merely to reach Americans with a speech or campaign for office. He utilized it to forge a deep bond with the American people that endured for decades after he died in 1945. They felt that they knew him and that he cared about them. Roosevelt’s identity as the leader of the U.S. through the Great Depression and WWII was inextricably linked to his Fireside Chats.