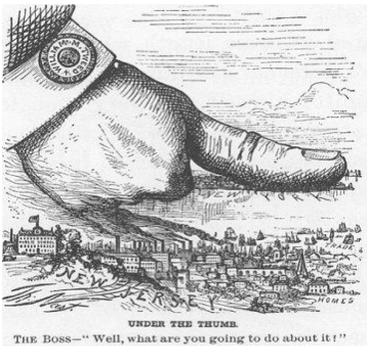 Were urban bosses corrupt politicians who manipulated the political system for their own control and gain, or were they providing essential services for immigrants and enabling the growth of cities despite corrupt means?

“So, you see, these fool critics don’t know what they’re talking about when they criticize Tammany Hall, the most perfect political machine on earth,” explained George Washington Plunkitt, the son of Irish immigrants who grew up in squalor in New York City’s Five Points neighborhood and later became a prominent figure in Tammany Hall, the most well-known urban political circle in American history. William “Boss” Tweed was the powerful leader of Tammany, the machine that eventually became synonymous with the Democratic Party of New York City. Bosses like Tweed worked their way up to the top of well-run political circles by securing political positions through patronage and the spoils system. By delivering on promises of socioeconomic and political improvement in exchange for votes, bosses built urban empires with supporters in various city (and, at times, state-level) positions working continuously to ensure a voter base. In return, voters afforded the bosses power to secure their own political and, in many cases, financial gains. Bosses typically had no qualms with engaging in questionable and often downright corrupt money-for-politics schemes, securing political positions to guarantee financial benefits to their supporters in the form of contracts for public building projects or favorable city tax and regulation codes. Plunkitt responded to the charge of corruption from many of the growing army of muckraking journalists; however, it is the characterization of the bosses as criminals who preyed on the many immigrants in cities in return for votes—“buying” political support from those who were most economically, politically, and socially vulnerable and in the process tainting America’s democratic process—that encourages historians to describe them as vultures of the Gilded Age. Urban bosses bribed and exploited immigrants for political gain and tossed them to the side when they were no longer needed. But this simplistic view of men like Boss Tweed ignores the social services that urban bosses provided to the downtrodden in the complex and often labyrinthine environment of America’s Gilded Age cities.

Urban bosses assisted immigrants in ways beyond simply providing food, jobs, and shelter in exchange for votes. Assistance for immigrants was more rooted in providing ways for immigrants to function in the cities rather than just providing them with material goods. Gilded Age cities were dangerous, unscrupulous, and exclusionary spaces for newly arriving immigrants. Neighborhoods such as Five Points were often cut off from basic services and resources provided to the wealthier inhabitants of the more upper- and middle-class sections of New York, leaving immigrants stranded and isolated. Long before the bosses gained power, politics in cities was ironclad and run and operated by elites, a pattern that became more engrained as industrial capitalists and millionaires gained influence in the political system by the late nineteenth century. Furthermore, with little legal assistance and lacking a clear path to naturalization, many immigrants remained voiceless and powerless to change the environment they lived in and the dangers they faced daily.

Enter the urban bosses who allowed immigrants to gain a foothold in American society through increased political participation (albeit a monetary and perverted form of political participation). Tweed’s influential political “ring” included various judges in New York’s municipal courts, and before the election of 1868, Tweed used these connections to turn the courts into “naturalization mills” to produce approximately 1,000 new American citizens per day—providing him with a new voter base. Many historians simply focus on Tweed’s practice of “buying” votes or having immigrants commit voter fraud to explain his rise to power, but more commonly, he assisted immigrants with the naturalization process and ensured the victory of his machine in a way that also provided immigrants with long-term benefits. Once naturalized, immigrants were now on a path to obtain jobs in city government as the Irish did in droves during the late nineteenth century. In return, these immigrants-turned-citizens were required to drum up continuous support for the political machine. Nonetheless, bosses provided immigrants with an opportunity for socioeconomic advancement, a pattern that created. as Plunkitt noted. political machines in various cities across the United States that lasted long into the twentieth century.

“For good service,” a city boss allegedly protested, “what’s a little 5 percent taken on the side?” Constituent service was the chief defense machine politics gave for the payoffs it gave to its grafters and crooks: the so-called paint-eaters, so greedy they supposedly gobbled the very paint off the walls of the offices they were given; the paper pushers who kicked back “rice pudding,” part of their salary to the man at the top; the city councilmen whose inside information let them take advantage of the city by contracting to build its roads and sewers at inflated prices; the lawmakers who fattened their bank accounts every time they handed out streetcar line franchises. Who were the voters to complain if Richard Croker, Tammany Hall’s chief, worked for his pocket, the same as they? In return, the machine boasted that it acted as the fair broker between all the conflicting interests of the city. It fixed broken street lamps, it expanded sewer lines and paving, and gave every inhabitant a chance to find not just a cold, impersonal bureaucratic justice but help.

It sounded so convincing—ballyhoo usually does. Reformers answered that city dwellers should expect good service without the payoff—the cash in the patrolman’s hand to keep a saloon open on Sundays or keep a grocery store from being harassed for every supposed regulatory infraction, the entry fee for appointment to a civil service job. Thriving on patronage, protection, and privilege giving, the bosses handed out monopoly rights to transit companies that charged workers as much as 20 percent of their daily wage to get to and from work. They squeezed money out of prostitutes and gamblers to let them keep breaking the law. They turned the police and fire departments into political armies. Any crook or con artist could depend on machine-appointed judges to dismiss all charges, if he was politically well connected.

When Detroit’s sewer system crumbled because the preferred contractors put too much sand in the concrete, when the city’s schools starved for lack of cash, when more than 100 New York women died in the Triangle Shirtwaist fire because even the most rudimentary safety conditions had not been met and those laws on the books went unenforced, was that good service? Was it good service, seeing to it that Jersey City had more than 10,000 more registered voters than the total number of eligible adults, or when “Boss” Tweed could confess it was not the voters who made the results in an election, but the counters of votes? In the very neighborhoods that gave Tammany Hall’s machine its heaviest majorities, the garbage piled up so high in some streets that it blocked doorways. Cholera throve in urban drinking water, and tuberculosis found a home in every apartment building of the slums—this when health inspectors, chosen for their political connections, confessed that although they were not sure what the word “hygiene” meant, they were pretty sure the city had a sufficient supply on hand. Importers learned that if they wanted their food shipped into New York before it rotted, generous bribes to machine bureaucrats were needed. The Christmas banquets that “Big Tim” Sullivan threw for every needy person on New York’s Lower East Side got headlines, but what about the consumers robbed by the special interests whose privileges the Sullivans endowed on them? That scuttle of coal a tenement-dweller got at Christmastime from the local ward heeler was chicken feed, paid for in crime-infested streets and squalid living conditions.

A successful “machine” operator had an open hand and a hearty smile for anyone, regardless of race or gender. And well he might smile! Politics paid enough to buy them suburban estates or race horses and ushered them into the most genteel society. And why not? The biggest beneficiaries of bossism, often as not, were the biggest bankrolls. It was they who got the lucrative privileges, the inexplicably low property-tax assessments, the building permits, and zoning exemptions. They, as much as local boss George Washington Plunkitt, could have said, “I seen my opportunities, and I took ’em.” Only, as usually happened with boss-run cities, it was the common people who were taken.