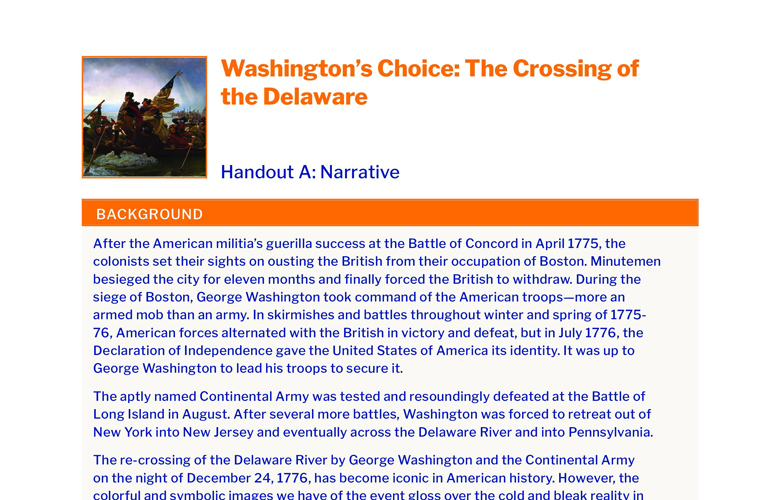 After the American militia’s guerilla success at the Battle of Concord in April 1775, the colonists set their sights on ousting the British from their occupation of Boston. Minutemen besieged the city for eleven months and finally forced the British to withdraw. During the siege of Boston, George Washington took command of the American troops—more an armed mob than an army. In skirmishes and battles throughout winter and spring of 1775-76, American forces alternated with the British in victory and defeat, but in July 1776, the Declaration of Independence gave the United States of America its identity. It was up to George Washington to lead his troops to secure it.

The aptly named Continental Army was tested and resoundingly defeated at the Battle of Long Island in August. After several more battles, Washington was forced to retreat out of New York into New Jersey and eventually across the Delaware River and into Pennsylvania.

The re-crossing of the Delaware River by George Washington and the Continental Army on the night of December 24, 1776, has become iconic in American history. However, the colorful and symbolic images we have of the event gloss over the cold and bleak reality in which the action took place. The nation was on the edge of defeat, needing the hope that could only come from a victory. The courage of George Washington and his men restored hope that against all odds, the young nation could survive.

The winter of 1776 was a miserable one. The wet and frozen ground over which the ill-equipped men of America’s army marched left summer as a distant memory. Washington’s troops were mostly made up of farmers, merchants, and laborers—not professional soldiers. Even his generals were novices. Many, like Nathaniel Greene of Rhode Island, had no military experience at all. Even Washington himself had only experienced combat as a British militia commander during the French and Indian War, which had ended thirteen years before.

Throughout 1776, the American army had suffered defeat after defeat. Hungry, exhausted, defeated, and demoralized, the army trudged through the frozen Pennsylvania countryside. Adding to Washington’s difficulties was the fact that the government of the new nation he represented was destitute. The new Congress could not provide money or basic supplies for his troops. The soldiers’ original enlistments were ending, and many more were deserting in hopes of receiving pardons from the British. The cause of independence stood on a knife’s edge.

The burden of saving it fell to Washington. The pressures on him personally and professionally were immense. Doubts were certainly at the forefront of his mind, but Washington knew he had to act. Washington’s experience as a militia commander taught him how to command a volunteer army. Good morale and hope were as essential to its survival as arms and munitions. Supplies were tough to obtain. Washington wrote pleading letters to Congress begging for reinforcements, for supplies, for money to pay his troops, for any support the former colonies could provide. Maintaining hope would take courage.

In a rhetorical move to boost hope, he had Thomas Paine’s pamphlet, The American Crisis, read aloud to his men on December 19th. “These are the times that try men’s souls,” it read, “Tyranny, like hell, is not easily conquered; yet we have this consolation with us, that the harder the conflict, the more glorious the triumph. What we obtain too cheap, we esteem too lightly: it is dearness only that gives everything its value.” These lines were a call upon the spirit of the army; a call to remind them of the incredible daring of the cause they had taken up.

However, stirring words could only do so much. A bold move against the enemy was essential. The British had taken up their winter quarters outside the city of Trenton, New Jersey. Washington’s troops were just across the Delaware River in Pennsylvania. If he could move his forces across the river and concentrate them against the British, a victory might be possible. Though the position of forces was in his favor, everything else seemed to be against him. Before Washington could even come into contact with the British, he’d have to conquer his environment. Significant snow accumulation meant that concentrating his men, cannons, horses, and supplies would be extremely difficult. Once they were concentrated, he needed dozens of boats to ferry his army across, which he did not have. Adding to this difficulty, the increasingly cold weather had created massive ice jams across the river. However, Washington knew what he had to do—on December 25th, they would cross the river.

Washington decided to attack at night, using the darkness to mask his movements and surprise the British encamped at Trenton. Although the darkness would improve the chances of surprise, it also added a challenge to what was already a daunting task. If he were able to concentrate his men successfully and lead them across the ice-choked river, he would need to then lead them into combat. This fight would not be against British regulars, however, but against Hessian mercenaries in the service of the English King. These Hessian troops were from central Germany and were renowned for their extremely effective discipline and vast experience. Facing these soldiers was a truly intimidating prospect for the young and exhausted force of laborers and farmers and the General commanding them.

The key to success was effective planning. Washington’s strategy was to divide his army into three sections, each of which would cross the river in a different place. Two would cross to the south of Trenton and one, commanded directly by Washington, to the north. These three parts of the army were then to converge on and attack Trenton. The password to identify friend from foe was to be “Victory or Death.” As preparation for the attack continued, the weather steadily worsened.

The troops were drummed out of camp at 2 p.m. on December 25th, and the mission was on. As the men marched down toward the river, the wind picked up, and rain started to fall. The men struggled to load cannon, horses and themselves into the slab-sided boats that would take them across the river. As the evening wore on, darkness settled and the weather continued to worsen, changing to snow and  hail with strong cold winds, freezing the wet men and equipment. The weather got so bad that the two parts of the army to the south were forced back from the river, unable to cross. If Washington were to lose courage and call off the attack, now would be the time.

After a mighty struggle that Henry Knox, one of Washington’s generals, described as being of “almost infinite difficulty,” Washington was able to get the men of his section across. The attack was now three hours behind schedule. Any chance of surprising the enemy seemed gone. Now with only one-third of his men in enemy territory and with the river at his back, Washington again had to decide. Could he push his wet, cold and tired soldiers to attack an enemy that had been comfortably installed in their warm homes all night? Or should he turn back and risk being caught and attacked on the river by the enemy?

After the battle, Washington would explain his decision in a letter to John Hancock. In it, he wrote, “I well knew we could not reach it [Trenton] before day was fairly broke, but as I was certain there was no making a retreat without being discovered and harassed on repassing the river, I determined to push on at all events.”

Washington would drive forward, for victory or death. Not only were his life and the lives of his men in the balance, but also the fate of the revolution. Ultimately, the attack proved a resounding success. Against all odds, as the weather continued to worsen, Washington successfully marched his men, horses, guns, and wagons to Trenton. After gaining the east bank of the Delaware River, the courageous, freezing army marched over nine miles to the Hessian camp at Trenton. Washington himself rode up and down the column of men, exhorting them to press on. There, they defeated the German mercenaries and won a huge psychological victory.

The war would drag on for seven more long and arduous years until finally, in 1783, independence was secured. Without Washington’s courageous decision to act decisively against the British, at the moment of the greatest danger for the colonial army, that may not have been the case.