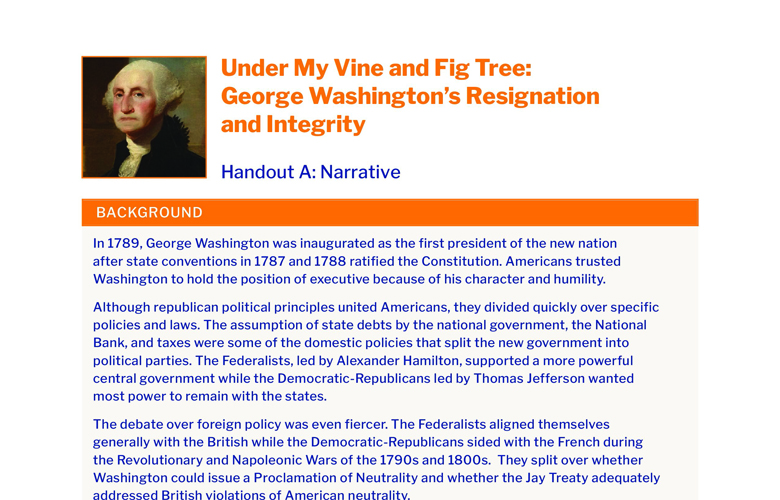 In 1789, George Washington was inaugurated as the first president of the new nation after state conventions in 1787 and 1788 ratified the Constitution. Americans trusted Washington to hold the position of executive because of his character and humility.

Although republican political principles united Americans, they divided quickly over specific policies and laws. The assumption of state debts by the national government, the National Bank, and taxes were some of the domestic policies that split the new government into political parties. The Federalists, led by Alexander Hamilton, supported a more powerful central government while the Democratic-Republicans led by Thomas Jefferson wanted most power to remain with the states.

The debate over foreign policy was even fiercer. The Federalists aligned themselves generally with the British while the Democratic-Republicans sided with the French during the Revolutionary and Napoleonic Wars of the 1790s and 1800s. They split over whether Washington could issue a Proclamation of Neutrality and whether the Jay Treaty adequately addressed British violations of American neutrality.

All of the partisan contentions gravely concerned President George Washington. He had a reputation for integrity and unifying the country around republican principles. He worried about the fate of the republic, fearing that the partisanship that was dividing the country would eventually tear it apart.

In the late spring of 1792, President George Washington sat down in Philadelphia to write a letter to Representative James Madison. He faced a momentous decision that would affect both his personal life as well as his young country. As he wrote frequently while commander of the Continental Army in 1783, he once again ardently wished to finish the rest of his days “on the banks of the Potomac, and under the shadow of my own Vine and my own Fig tree, free from… the busy scenes of public life.” He wished to resign after doing his duty for one term as president.

However, he feared that there could be “disagreeable consequences of retiring” because the young nation might still need his leadership. He was also profoundly concerned about the rise of political parties that were dividing the country into separate camps. Nevertheless, Washington intended to retire and asked Madison to draft a farewell address for his retirement. Madison had joined the ranks of the opposition to Washington’s administration, and the president hoped to promote unity by reaching out to him.

Washington wanted above all else to be seen as a man motivated by the public good and not personal ambitions. He came to fear that announcing retirement would appear to be vain because “it may be construed into a Maneuver to be invited to remain.” On the other hand, he did not want to be elected and then “to decline afterwards.” Washington knew he was setting precedents for the republic and sought to possess a reputation for an upright character. His profound integrity in serving the public was the reason people entrusted him with power during the Revolutionary War and the first presidency.

As the summer faded and the leaves started to fall, Washington felt increasing pressure to decide on whether he would continue in office. He wanted to retire, but his own Cabinet and the government had split into political parties, which he saw as rooted in ambition, self-interest, and faction rather than the public good. With a heavy heart and a more than a little anger, he composed letters to his Cabinet members to stop their in-fighting and quell their party spirit.

Washington told Secretary of State Thomas Jefferson, “How unfortunate, and how much is it to
be regretted then . . . that internal dissensions should be harrowing and tearing our vitals.” The president wished Jefferson and others to have “more charity” for other opinions and a sense of their own fallibility. He dressed down Alexander Hamilton, telling the Secretary of the Treasury that “differences in political opinions” are expected but should not lead to so much discord. “The Seeds of discontent, distrust, and irritations which are so plentifully sown,” could only weaken and destroy the republic, he told Attorney General Edmund Randolph.

In the end, the desire to promote national unity compelled Washington to stay in office for four more years. He yearned for the comforts of Mount Vernon but believed his presence was necessary. “To say that I feel pleasure from the prospect of commencing another tour of duty would be a departure from the truth,” he told one correspondent. While he was honored by the “public approbation and confidence,” his decision to remain caused “long and painful conflict” as it was his “fixed determination to return to the walks of private life.”

If anything, Washington’s second term witnessed even further political divide, which caused him to lament the disunity that he believed shrouded politics in a gloomy future. He pined for Mount Vernon more than ever. He planned to retire from the presidency after two terms. Other statesmen had to take up the helm of the state since the United States was a republic, not a monarchy. Surrendering power was a mark of Washington’s incredible virtue and integrity.
Most others in history—Alexander the Great, Julius Caesar, Oliver Cromwell, Napoleon, Adolf Hitler, Joseph Stalin—ambitiously sought to amass power rather than give it up.

In May 1796, Washington asked Alexander Hamilton to write his farewell address. Washington purposefully sent Hamilton a copy of Madison’s farewell draft as an expression of reconciling the different partisan views in the country and promoting public unity. Washington understood that Thomas Jefferson and other opponents of the administration had seen Madison’s draft. He hoped they would be appeased by seeing their ideas promulgated in the final farewell copy. Washington laid out some general principles for Hamilton, who composed the draft and then submitted it to the president for his approval.

On September 19, George Washington’s Farewell Address appeared in the pages of the American Daily Advertiser. The address focused on unity as an essential foundation for a lasting republic. Among the themes that endorsed this principle, Washington warned of the “baneful effects of the Spirit of Party.” He averred that the “spirit of revenge natural to party dissention…is itself a frightful despotism.” A system of quibbling political parties threatened “the ruins of Public Liberty” because “it agitates the Community with ill-founded jealousies and false alarms, kindles the animosity of one part against the other.”

After a quarter century of public service during the Revolutionary War, the Constitutional Convention, and the first presidency, George Washington finally retired to his beloved Mount Vernon with his wife Martha. He had successfully won a war and created a republic based upon his virtuous character. He had not ended the political parties which he thought were antithetical to national unity, but his example of serving the republic and then retiring from
office would help unify the country and set a model of integrity.