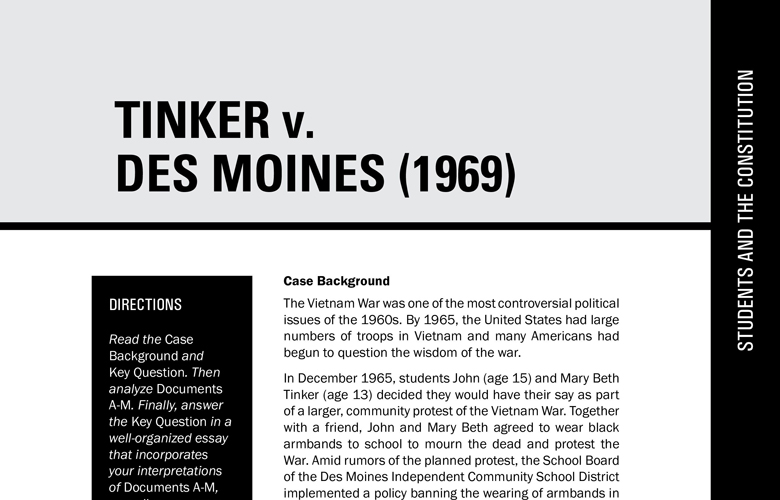 STUDENTS AND THE CONSTITUTION

The Vietnam War was one of the most controversial political issues of the 1960s. By 1965, the United States had large numbers of troops in Vietnam and many Americans had begun to question the wisdom of the war.

In December 1965, students John (age 15) and Mary Beth Tinker (age 13) decided they would have their say as part of a larger, community protest of the Vietnam War. Together with a friend, John and Mary Beth agreed to wear black armbands to school to mourn the dead and protest the War. Amid rumors of the planned protest, the School Board of the Des Moines Independent Community School District implemented a policy banning the wearing of armbands in school. Any offending students would be suspended. The three students continued with their plans and wore their armbands to school. All three were suspended until they agreed not to wear the armbands.

The Tinkers argued that by banning the armbands and suspending students for wearing them, public school officials had violated the First Amendment. The case eventually went to the Supreme Court in 1968. The Court had to address two central questions: 1) was the expressive behavior of the students an exercise of “speech” that warranted protection under the First Amendment’s speech guarantee? and 2) how can individual liberties be balanced with the need for discipline, the rights of others, and the “special characteristics” of the public school environment? (The decision would not apply to private schools.)