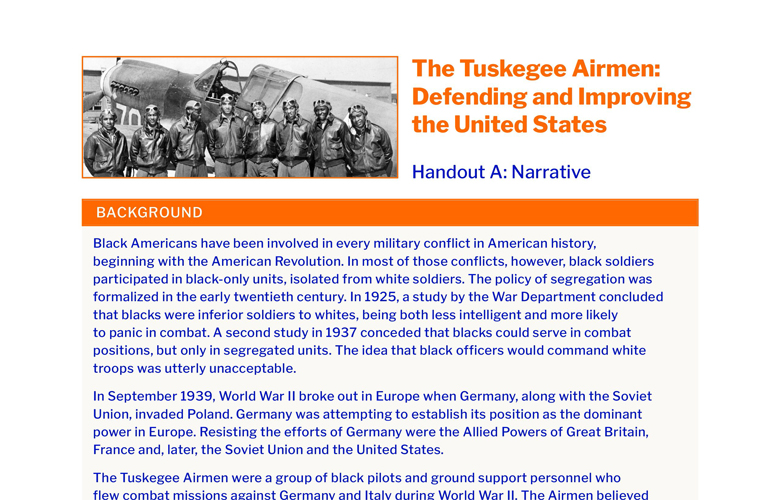 Black Americans have been involved in every military conflict in American history, beginning with the American Revolution. In most of those conflicts, however, black soldiers participated in black-only units, isolated from white soldiers. The policy of segregation was formalized in the early twentieth century. In 1925, a study by the War Department concluded that blacks were inferior soldiers to whites, being both less intelligent and more likely to panic in combat. A second study in 1937 conceded that blacks could serve in combat positions, but only in segregated units. The idea that black officers would command white troops was utterly unacceptable.

In September 1939, World War II broke out in Europe when Germany, along with the Soviet Union, invaded Poland. Germany was attempting to establish its position as the dominant power in Europe. Resisting the efforts of Germany were the Allied Powers of Great Britain, France and, later, the Soviet Union and the United States.

The Tuskegee Airmen were a group of black pilots and ground support personnel who flew combat missions against Germany and Italy during World War II. The Airmen believed they had a responsibility to both destroy the fascist regimes of Italy and Germany and to challenge the system of segregation which rested on the idea of black inferiority. They sought to be respected for their abilities, not shunned for the color of their skin.

By the late 1930s, it was becoming clear that war was coming in Europe, and the United States began making plans to recruit and train more pilots. In 1938, Congress established the Civilian Pilot Training Program to provide flight instruction to college students. At first, the plan only considered white students. However, in April of 1939, Congress amended the law to include blacks as well. One of the schools selected for the training program was the Tuskegee Institute, an all-black college in Alabama.

Training began at Tuskegee in December 1939, and by the spring of 1940, the first graduates of the program attempted to join the Army Air Corps (before 1947, the Air Force was not a separate branch of the military). They were turned down because all of the Air Corps units were white only. In 1940, however, this policy of excluding blacks was coming under attack. The National Association for the Advancement of Colored People (NAACP) was demanding that blacks be allowed a greater role in the military. The Republican candidate for president, Wendell Willkie, called for integrating the Armed Forces. In December of 1940, President Roosevelt announced plans to create the all-black 99th fighter squadron. Later, three additional all black fighter squadrons would be trained: the 100th, the 301st, and the 302nd. While not all of the men were trained at Tuskegee, these black pilots and support crews became known collectively as the Tuskegee Airmen.

The 99th was the first unit to finish training, and in April 1943 was sent to North Africa, where it assisted in the Allied invasion of Italy. In January 1944, the other fighter squadrons finished their training and were organized into the 332nd fighter group along with the 99th. In June 1944, the 332nd fighter group was assigned to the 15th Air Force. The mission of the 15th Air Force was to destroy industrial targets in German-occupied France, the Balkans, and in Germany itself. The job of the fighter group would be to protect the bombers from attack by German fighter planes. Between June of 1944 and the end of the European war in May of 1945, the Tuskegee Airmen flew over 300 missions with the 15th Air Force. Just over half of those missions involved escorting bombers.

The Tuskegee Airmen had their work cut out for them in Europe. First, they needed to help defeat Nazi Germany. If the primary role of a fighter group was to protect bombers from enemy fighter attack, then the 332nd Fighter Squadron has much to be proud of. Only twenty-seven bombers escorted by the 332nd were shot down by enemy fighters. For the other six fighter groups that made up the 15th Air Force, the average number of bombers shot down by enemy fighters during the same time period was forty-six. It was clear that the Tuskegee Airmen fulfilled their part in defeating the threat of German dominance on the continent.

The Tuskegee Airmen also wanted to challenge the system of segregation in the U.S. military. Here, again, they were successful. While it is true that the Airmen were part of a segregated system in the U.S. military during World War II, they never fully accepted the system. The clearest example of this comes from the experience of the 447th Bombardment Group. In mid 1943, plans were made to train a group of black bomber pilots and crews. Training began on bases around the country. In March 1945, the group was assembled and sent to Freeman Field in Seymour, Indiana to finish their training. On April 1, the base commander, Robert Selway, ordered that the officer’s club be restricted to whites only. Over 100 black officers were arrested when they attempted to enter the officer’s club. Selway released the officers but insisted they sign a statement saying they understood and accepted the policy of segregation. They refused. After months of investigation by higher offices, Selway was removed and replaced with Col. Benjamin O. Davis Jr., one of the early pilots trained at Tuskegee. The black officers of the 447th had made a powerful statement in support of integration.

Three years later, in July of 1948, President Truman ended segregation in the U.S. military through Executive Order 9981. There were many reasons for Truman’s actions—the election of 1948, the recommendation of his Committee on Civil Rights, and public pressure by the NAACP and other civil rights organizations—but the contributions of the Tuskegee Airmen clearly played a role. For example, Col. Noel Parrish, who had trained the Airmen in Tuskegee, was a supporter of integration. General Carl Spaatz, Chief of Staff for the Air Force, had begun integration two months before Truman’s order. Finally, Stuart Symington, the first Secretary of the Air Force (in 1947 the Air Force became independent from the Army), helped Truman write the executive order integrating the armed forces.

The Tuskegee Airmen understood that to help make the nation safer they needed to help defeat Nazi Germany and challenge the system of segregation and lack of respect for African Americans in the armed forces. In both pursuits, they were resoundingly successful, although not without cost. Of the 960 Tuskegee Airmen who went overseas as fighter pilots, sixty-six were killed in combat. Another fifteen were killed in accidents, and another thirty-one were shot down and captured by the Germans. Their sacrifice was essential to helping African Americans earn greater respect in the United States.