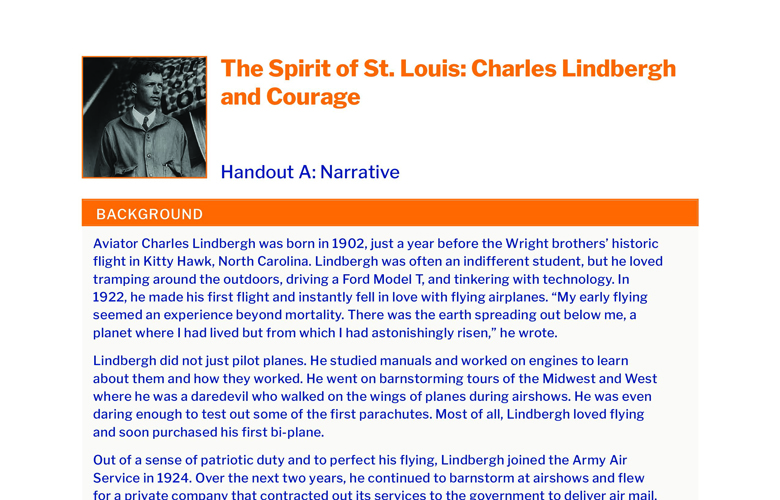 Aviator Charles Lindbergh was born in 1902, just a year before the Wright brothers’ historic flight in Kitty Hawk, North Carolina. Lindbergh was often an indifferent student, but he loved tramping around the outdoors, driving a Ford Model T, and tinkering with technology. In 1922, he made his first flight and instantly fell in love with flying airplanes. “My early flying seemed an experience beyond mortality. There was the earth spreading out below me, a planet where I had lived but from which I had astonishingly risen,” he wrote.

Lindbergh did not just pilot planes. He studied manuals and worked on engines to learn about them and how they worked. He went on barnstorming tours of the Midwest and West where he was a daredevil who walked on the wings of planes during airshows. He was even daring enough to test out some of the first parachutes. Most of all, Lindbergh loved flying and soon purchased his first bi-plane.

Out of a sense of patriotic duty and to perfect his flying, Lindbergh joined the Army Air Service in 1924. Over the next two years, he continued to barnstorm at airshows and flew for a private company that contracted out its services to the government to deliver air mail. He had to bail out of the planes or make crash landings several times and barely escaped with his life. Still, nothing would stop this intrepid pilot from braving the dangers to fly.

Several pilots from around the world courted the dangers in order to be the first to achieve
historic flights. In 1919, three U.S. Navy seaplanes (with multiple pilots) attempted to fly from New York to England, and one plane made it. In 1923, two U.S. Army pilots flew across the continental United States. In 1926, Richard Byrd and Floyd Bennett flew across the North Pole. A wealthy French businessman offered the $25,000 Orteig Prize for a solo pilot to fly across the Atlantic from New York to Paris or vice-versa back in 1919, but the prize had yet gone unclaimed. In 1926 and 1927, several aviators were preparing to attempt the seemingly impossible and fly across the Atlantic. One of them was the courageous Lindbergh, who moved to San Diego to oversee construction of his plane, Spirit of St. Louis. By the spring of 1927, he was ready to fly solo across the Atlantic or die trying.

On the evening of May 19, 1927, aviator Charles Lindbergh was being hounded by reporters in New York City as he made his way to a Broadway play. Lindbergh had been trying to get his mind off the historic flight he intended to attempt of being the first person to fly solo across the Atlantic from New York to Paris. He was also trying to fight off the boredom of waiting for a break in the week’s stormy weather across the Northern Atlantic. A few competitors were similarly hoping for sunny skies in order to be the first to fly to Paris. They all wanted to be the first to achieve this goal in the exciting new frontier of the skies.

Before the play began, Lindbergh received one of the most significant meteorological reports of the century when he learned that a high-pressure system would clear out the storms. He ordered his car back to his hotel for a nap since he had been up since the morning and faced approximately 35 hours in the air without sleep. He picked up a few sandwiches for the flight at a drugstore counter on the way. Since he would have to stay awake for the entire flight, Lindbergh went into his room for a long nap and posted a friend from the Missouri National Guard at the door to keep away the press. Just as he was falling asleep, his friend knocked loudly on the door and asked, “Slim, what am I going to do when you’re gone?”

Foiled in his attempt at sleep, Lindbergh went down to Curtiss Field at 2:30 a.m. and made some last-minute preparations while eating a sandwich. At 4:15 a.m., his specially-designed airplane, the Spirit of St. Louis, was hauled to nearby Roosevelt Field, where his competitors’ planes sat idle in the hanger. The plane’s two tanks were filled with 450 gallons of fuel each. The rain had stopped as expected, but the air was still cold and humid as the sun rose. After checking and re-checking every detail, Lindbergh climbed into the wicker chair in his cockpit. He knew the journey he was about to embark on could easily be fatal.

Nevertheless, Lindbergh started the single engine and propeller, which responded somewhat sluggishly because of the humidity. He did not know whether the plane could clear the telephone wires hanging at the end of the field, let alone fly 3,400 miles across a broad expanse of ocean. At 7:51 a.m., he turned to his crew with his boyish grin and asked, “What do you say–let’s try it.” With about 500 spectators holding their breath, Lindbergh strapped himself in, pulled down his goggles, and put in some makeshift earplugs. At 7:54, he throttled the engine forward with the conviction that he would land in Paris. The Spirit of St. Louis responded slowly, and its wheels bounced on the wet runway twice before finally lifting off into the skies to a great cheer from below.

Lindbergh followed the New England coast to the northeast. He would write, “I’m giving up the continent and heading out to sea in the most fragile vehicle ever devised by man.” Several had died trying already and never got very far. Many people doubted whether Lindbergh could achieve this seemingly impossible mission. Lindbergh himself thought his actions were so foolhardy that they could be described as “arrogance,” but the millions of people around the world who cheered on his voyage would describe it as heroic and courageous.

By the time Lindbergh flew over Nova Scotia at noon after four hours in the air, he was already battling great fatigue and had been awake for more than 30 hours. He wrote, “My whole body agrees dully that nothing, nothing life can attain is quite so desirable as sleep. My mind is losing resolution and control.” After eleven hours in the cockpit flying at 100 miles per hour, Lindbergh passed over Newfoundland at dusk where he buzzed a fishing town that contained the last humans he would be in contact with for nearly 2,000 miles. He could easily have landed and tried again when he was more fully rested. Falling asleep over the Atlantic meant Lindbergh would crash into the ocean to certain death. He resolved to continue and flew alone eastward into a dark and stormy night.

Lindbergh flew around thunderstorms and squalls as he fought off sleep. When he climbed near 10,000 feet so that the brisk air would keep him awake, ice built up on the wings and threatened to down the plane. Finally, the skies cleared, and the moon rose to guide the undaunted aviator relentlessly to the east. With little modern instrumentation, Lindbergh used
dead reckoning to estimate his position, though he was not exactly sure where he was as he fly
through the night. Soon, he caught up to the rising sun over the Atlantic, and still he pressed forward.

As he flew low over the waves, Lindbergh spotted a porpoise—the first living thing he encountered since leaving the shores of Newfoundland. Seagulls soon filled the skies and were a hopeful sign of land nearby. Finally, the unmistakable cliffs of the coast of Ireland came into view with boats full of surprised fishermen dotting the waters. He was ecstatic to calculate that he was precisely on course and even happier to see that a favorable tailwind had shaved a few hours off his flight. Lindbergh noted that time was “no longer endless” as it was in the darkness over the vast expanse of infinite blue ocean stretching in every direction.

Giddy with success, Lindbergh considered extending his record flight by flying all the way to Rome, but good sense and humility reined in these impulsive thoughts. He still had more than 600 miles ahead of him, and the sun was setting yet again. Lindbergh crossed the comparatively narrow English Channel and flew over France on his way to Paris. When he arrived over the city, he flew around the Eiffel Tower and searched out the Le Bourget airfield. Thousands of lights guided him, which turned out to be a massive traffic jam of excited Parisians heading to the airfield.

Lindbergh finally landed at 10:24 p.m. local time on May 21 and taxied to the hanger where as many as 150,000 on-lookers hoped to catch a glimpse of the historic plane and the heroic pilot that flew it. The massive crowd gathered around the stopped Spirit of St. Louis and began to tear at the plane, desperate for a souvenir. The courageous young man was whisked away from the crowd and taken to the American embassy for a steak dinner and a well-earned night of sleep after the 33 ½ hour flight.

Lindbergh had done the impossible by flying solo across the Atlantic. He flew in the airplane, which was the latest marvel of modern technology that thrilled people around the globe, and he had also demonstrated remarkable courage to become a great individual hero. He was honored in America with a ticker-tape parade, an appearance before Congress, and a Distinguished Flying Cross and Congressional Medal of Honor. President Calvin Coolidge said Lindbergh’s success was “the same story of valor and victory by a son of the people that shines through every page of American history.”